Insider: Diva Down… Toms at Bergdorf… 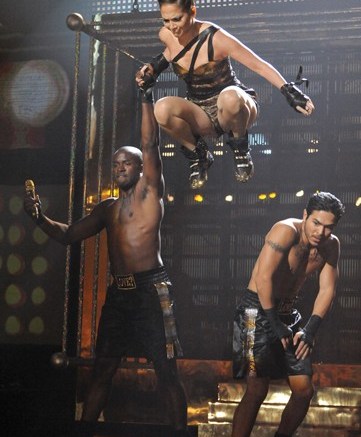 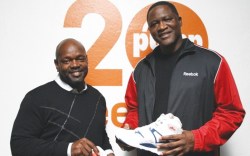 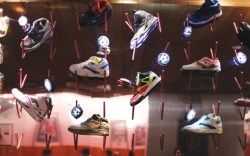 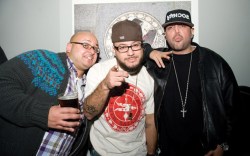 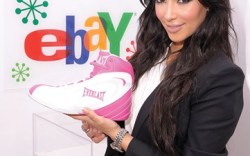 J.Low
Jennifer Lopez may be taking back her love — and her Louboutins — after a high-profile tumble during her performance of “Louboutins” during the American Music Awards on Nov. 22. During her love ’em and leave ’em dance number, J.Lo (at left)sang about packing up her Christian Louboutin shoes and leaving her man, only to roll off the back of one of her dancers and onto the floor. It may not have been the comeback performance Jenny from the Block was hoping for, but memorable nonetheless. And Insider gives props to any woman who can take a spill in four-inch wedges and spring back into full dance mode.

Pump It Up
NBA legend Dominique Wilkins (below, right, with Emmitt Smith) is all for bringing back Reebok’s Pump. At the athletic brand’s soirée recently at Pop Burger in New York’s Meatpacking district, the former Pump pitchman said he couldn’t believe it had been 20 years since the shoe made its debut. And even though he’s an office man now (Wilkins is VP of basketball for the Atlanta Hawks), the former baller admitted he still has a soft spot for kicks. “I always wear sneakers,” he said with a laugh when Insider asked about his go-to dress shoe.

Meanwhile, sneaker fans soon will have a second chance at a recent classic: At the event, Insider caught up with sneaker designer Hue Vo (who handles special makeups for L.A. hotspot Undftd, among others) who dished that a relaunched Greedy Genius line will be hitting Foot Locker, Finish Line, Shiekh and DTLR for spring ’10. Vo said the line will retail for $60 to $80 and looks “really dope, and the quality is amazing.” Vo also weighed in on a major trend in athletic: the hiking boot/military inspiration that was so prominent in the fêted Reebok Pump 20 collection. Subdued, versatile colors, all-season wearability and premium materials give shoppers a “reason to buy” in this economy, Vo said.

Mass Mutual
Further proof of the military trend? The limited-edition Freedom Trail collection that fellow Bostonites New Balance and Concepts celebrated on Nov. 19. Featuring the first-ever 875 boot and a reimagined 1500 sneaker, the collection — designed by New Balance with Concepts shoe guru Frank Rivera — taps into New Balance’s trail heritage, including the brand’s Rollbar technology in the 875 boot. According to Luis Navarro of New Balance (above, far left, with Rivera, center), expect to see more of that influence going forward. “We’re seeing that there’s a demand in the industry for hiking boots beyond the traditional fall business,” he said. “What used to be a six-month business is extending into a nine-month business.” In fact, Navarro added, New Balance will be bringing back another hiker silhouette from the archives — the H710 — for fall ’10.

Shop Spot
Looking for an idea for that all-important holiday gift? Kim Kardashian suggests shoes. Insider caught up with the reality TV star at the opening reception for eBay’s first holiday pop-up shop in midtown Manhattan earlier this month. Kardashian shared her obsession of the moment (thigh-high boots) and told Insider she’s an avid eBay user: She runs the Kim’s Kloset page, where a percentage of proceeds are donated to The Dream Foundation. “Shoes sell extremely well on eBay — they are one of the top sellers because everyone typically knows their size and people have weird foot fetishes. I sold a worn-out pair of flip flips for $1,500,” said Kardashian, who was sporting Louboutin pumps. “The best pair of shoes I bought was a pair of Christian Dior leopard-print and ostrich boots. They were so funky and cool,” she said. Constance White, eBay style director, told Insider that Tory Burch, Prada and Christian Louboutin are some of the hottest shoe brands on the site.

Fashion Philanthropy
It was all about Tex-Mex as Blake Mycoskie hit Bergdorf Goodman to celebrate the launch of his Toms shoe line on Nov. 19. About 200 people showed up to do a little shopping and sip tequila with Mycoskie, who also convinced friends to join in a ping-pong competition on the store’s contemporary shoe floor. Liya Kebede, model and goodwill ambassador for the World Health Organization, and musician Matt Wertz stopped by to mingle with Mycoskie and Bergdorf execs, including senior women’s fashion director Roopal Patel (above, left, with Mycoskie). “What he’s done is amazing,” Patel said of Mycoskie. “He’s taken something so basic and made it cool.” Now, Patel said, she’d like to get a first-hand look at what the Toms founder does on his overseas shoe distribution trips. “It would be a great research project,” she said, hinting she may try to tag along on Mycoskie’s trip to Ethiopia next June. But before then, Mycoskie said, he’s going to squeeze in a little personal travel. “I’m going surfing in Costa Rica,” he said of his month-long solo trip south next month. “I haven’t had a vacation in a year.”

Ladies & Gents
Christian Siriano sure loves his spring ’10 footwear and handbag collection for Payless. So much so, he told Insider, he even wears pieces from the women’s line. “I carry the messenger bag every day,” he said of a black patent purse embellished with a gold chain. Insider also spotted Siriano wearing a pair of marbleized, fabric sneakers from the collection. “I love them,” he gushed.