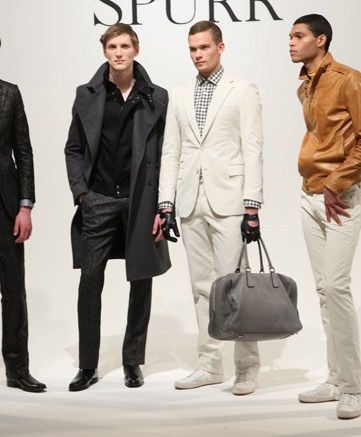 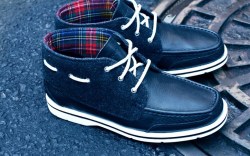 Fashion Week Footwear
Gift bags at New York Fashion Week are ubiquitous, but guests at the Richie Rich show, held Feb. 18 at the Waldorf-Astoria look forward to their takeaways. In addition to providing shoes for all the men and most of the women who took to the runway for Rich’s first show under his own name (the designer is best known for his work with Heatherette), Cypress, Calif.-based Vans created a limited-edition Sk8-Hi style for VIP attendees. Only a few hundred of the colorful takeoffs on the iconic checkerboard style are being produced, but Rich said the experience was a great one. “I’ve been rocking Vans since the seventh grade,” Rich told Insider. “I’m originally from California, and I love the look on the runway of the East Village. Collaborating is a dream come true.”

Another sneaker brand on the runway was Boston-based PF Flyers, seen on the feet of models at the Simon Spurr show. The designer chose the brand’s No. 5 style in white, black, gray, camel and brown to complement his suits and denim. PF Flyers’ Scott Lowry said the styles come from a variety of collections, but all will be available for fashion-forward customers looking to duplicate the look. In fact, Lowry told Insider that a dedicated section of the PF Flyers Web site was set up to show off the styles.

There were no sneakers — but plenty of attitude — at the Christian Siriano show, held Feb. 19 at the tents, where the “Project Runway” winner debuted his new Payless ShoeSource line. The sky-high heels and boots with pyramid studding (to reflect the line’s Egyptian influence) were set off by bright turquoise looks. “That was the look for this collection,” Siriano told Insider backstage after taking his bow, when asked if turquoise was going to be his trademark. “I don’t know if it will keep translating, but maybe I’ll keep it so no one steals it.

Built Tough
One of the survivors of U.S. Airways Flight 1549, which crash-landed in New York’s Hudson River on Jan. 15, has been lauding his Johnston & Murphy shoes for keeping his feet warm as he stood on the wing of the plane and waited for rescue. According Johnston & Murphy territory manager Bill Dresser, it was the Melton oxford, which has been in the line for 20 years. And the lucky survivor was sent a few free pairs for his shout out. “You can’t buy that kind of advertising,” said Dresser.

Show Boat
Rockport Established 1971 and the design team at Boston boutique Bodega have partnered on two special-edition shoes called Town and Country. Both are based on Rockport’s classic boat shoe, the Bayshore. The Town version features a melton wool collar with plaid flannel and waterproof leathers, while the Country version features waterproof leathers with a soft pigskin lining. The shoes, which will retail for $120, debut at Bodega on March 14.