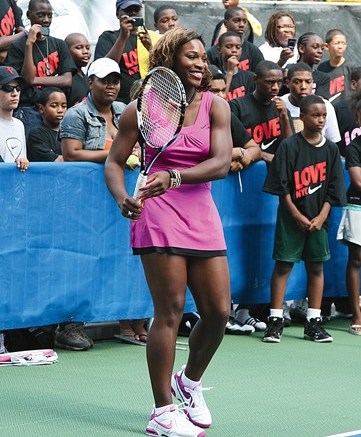 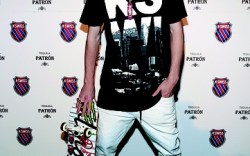 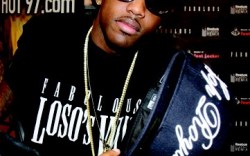 Game Set…
With the U.S. Open set to kick off today, tennis was on the minds of the folks at Nike last week. To celebrate the sport — and the new apparel and kicks the brand’s stars will be showcasing on the court — the Nike elves arrived in downtown Manhattan in the wee hours of Wednesday morning with 20 tons of sand and built a regulation-size tennis court with seats and pop-up retail. A few hours later, Nike athletes Roger Federer, Serena Williams (at right) and Rafael Nadal showed up in their new Nike outfits and interacted on-court with kids from local athletic groups (which received $15,000 donations from Nike). Williams — who has her own designer line, Aneres, and is known for her on- and off-court looks — wanted to talk shop. “I have a passion for fashion,” she said. “I like pink, so I thought because it’s been 10 years since I won my first Grand Slam, I wanted to do something really special and I wore my favorite color.” Serena’s hot-pink tennis dress and matching shoes are available at retail now, according to a Nike spokesperson — as are Federer’s look and Nadal’s taxi-cab-themed package. The tennis court, however, is no more — just as it was built, the court was pulled down under cover of night.

… And Match
Later Wednesday evening, K-Swiss brought its California sports aesthetic to New York for a tennis-themed party celebrating the spring ’10 line and some of its featured athletes (including Vera Zvonareva, who’ll be testing her skill on court in Queens, and longtime spokeswoman Anna Kournikova). K-Swiss put its people to work on the runway, along with recently named skate line creative director and pro skater Greg Lutzka (at left). Lutzka told Insider the company was close to signing more skaters to its team, which should be finalized by the end of the year. He also spilled the specs for the signature skate shoe he will release next year: suede with a three-piece toe, vulcanized sole and high- and low-top versions.

Heading South
New York housewife Jill Zarin made a trip to the South last week without ever crossing the Mason-Dixon Line. The star of Bravo’s “The Real Housewives of New York City” made an appearance at a midtown Manhattan trunk show featuring up-and-coming Southern shoe, jewelry and clothing makers, including Atlanta-based footwear designer Ann Roth. Zarin slipped into one of Roth’s fall ’09 styles — a velvet and silk floral-print heel — and dished to Insider about future plans for her own footwear line. “I’ve been talking to people,” Zarin gushed, though no concrete plans have been made. “Everyone has told me I should [do a line]. I’m the shoe and bag lady.”

Fabolous at Foot Locker
Brooklyn-based rapper Fabolous stepped out in a Manhattan Foot Locker last week to support his partnership with Reebok and its new Classic Remix collection. While fans flocked to meet the “Throw It in the Bag” artist, Fab dished to Insider on his personal sneaker style. “Right now, I am digging high-tops, but it all depends on what I’m wearing,” he said, noting that comfort and fashion are key to a successful stage look. And when on tour, he never misses a chance to eye new swag. “I like to stop in all the hot spots across the country and see what’s new in the stores.” The Classic Remix Tour will next take Fab to New Orleans, Miami, Houston and Atlanta.