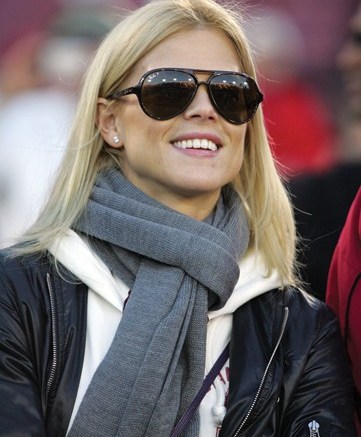 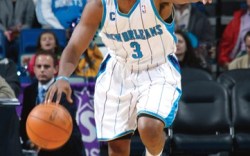 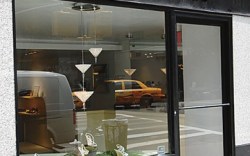 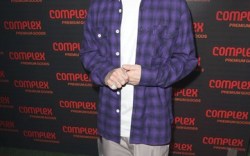 Celeb Suggestion
Forget the Tiger — watch out for the lioness. Despite strong denials from Puma, rumors persisted at press time last week that the company was in talks with Tiger Woods’ wife (and soon-to-be ex, if reports are to be believed) Elin Nordegren (at right) to front the company’s Tretorn brand, adding another wrinkle to the ongoing drama. Accenture recently dropped Woods as its spokesman, and AT&T is rumored to be considering a similar move — Nike, however, is standing by the pro, who announced his indefinite retirement from golf last week (ironically, just days before being named The Associated Press’ Athlete of the Decade). But what should Tiger do to repair his public image and viability as a product pitchman? Brian Maloney, CEO of New York-based PR firm Maloney & Fox, said it’s simple: Come clean. “There’s a lot of speculation now, and he’s going to have to be a true man and ’fess up. Right now, his whole m.o. should just be to tell the truth —in terms of rebuilding his brand, he really has to. It should be a very strategic and well-timed rollout with Oprah Winfrey or maybe with Larry King, or a one-on-one with Matt Lauer. Most people are pretty forgiving at the end of the day.” The key, Maloney told Insider, is not just issuing a half-hearted mea culpa, but a real expression of regret. “He really has to be deeply, deeply credible and believed.”

Strike!
Chris Paul, captain of the New Orleans Hornets, is a major force on the courts — and the lanes. Paul’s new signature shoe, his third, comes out later this month with brand Jordan. The CP3.III, created by Jason Mayden (the man behind the Jordan 2009, as well as both previous Chris Paul shoes), debuts a non-Air cushioning technology called Podulon, designed to get the point guard closer to the ground. The $118 style even follows the company’s eco-friendly Considered philosophy. But what really got Insider’s attention was the big, bowling-style numbers on the back and outsole. According to Jordan, it makes perfect sense. “Chris loves the sport of bowling,” Mayden laughed. “He often talks about how he can beat anybody on the lanes. We wanted to tie back what he does with his family with what he does as a professional. Chris always says he’s a professional bowler who plays basketball as a hobby.” Paul is, after all, a sponsored, official spokesperson for the U.S. Bowling Congress. Insider e-mailed Paul to get the scoop. “I like the challenge of bowling: It’s you, one ball and 10 pins, and you’re trying to knock them all down,” he wrote. “I bowl whenever I can. Matter of fact, I’m going bowling with my teammates tonight.” Could custom Jordan bowling shoes be far behind? “The Jordan brand always comes out with something special for me, so you never know,” Paul said.

L.A. Woman
As the cold winter weather sets in, Claudia Ciuti is dreaming of a store in sunny Los Angeles. “We’re finding a second location to sell the second part of the collection and to connect more with actresses,” said the designer, who was on hand earlier this month to present new arrivals for spring at her New York boutique on Madison Avenue. “I love Los Angeles. I try to go as much as I can.” Speaking of actresses, Ciuti told Insider she has been hard at work designing shoes for actress Mena Suvari’s big day. The “American Beauty” thesp will marry music producer Simone Sestito in Italy next June.

Shoes Over Dudes
It’s either good news for shoes or a shocking statement about the battle of the sexes, but according to a survey of 1,000 women conducted by the shoe storage Website Tszuji.co.uk, 92 percent of women polled said they remember the first shoes they bought with their own money, while a scant 63 percent could recall the name of the first person they kissed. And for dudes, the news gets worse. Ninety-six percent of women said they regretted throwing out a pair of shoes after the fact — while only 15 percent felt the pangs of regret after kicking a former boyfriend to the curb.

Fan Girls
Hot on the heels of the opening of the Nicholas Kirkwood pop-up shop at Le Bon Marche (it gives holiday shoppers in Paris first dibs on the designer’s spring ’10 line through Jan. 2), style maven Sarah Jessica Parker was spotted in New York on three television appearances in three days wearing three different shoes from the young Brit’s fall ’09 collection. This comes a week after actress Julianne Moore wore a pair of Kirkwood’s spring ’10 shoes to the New York screening of the Tom Ford movie, “A Single Man” — a role for which Moore has just received a Golden Globe nod. Kirkwood, whose momentum (and consumer base) continues to grow heading into 2010, graciously said, “It’s a very, very nice way to end the year, and I’m looking forward to next year.”

Swag
Marc Ecko’s Complex magazine headed west recently for its annual Premium Goods event. Onitsuka Tiger gave celebrity attendees a sneak peek at its fall line, as well as its new Zodiac collection. Among the celebrities who turned out for the event were Blink-182 drummer Travis Barker (above), Katerina Graham of “Vampire Diaries,” actor Omar Miller and reality TV stars Stephanie Pratt and Paris Hilton. “It was a good vibe and a great crowd and ended up being one of our best events this year,” said Complex Editor-in-Chief Noah Callahan-Bever.

— With contributions from Kristen Henning and Regina Smith Popp