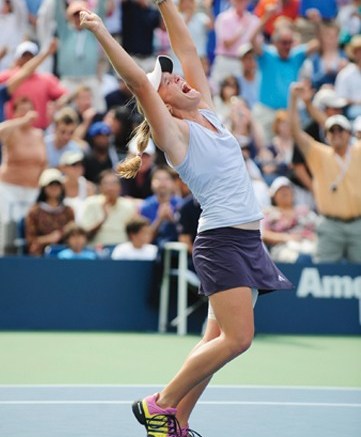 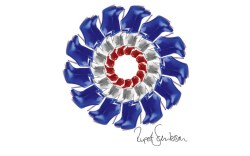 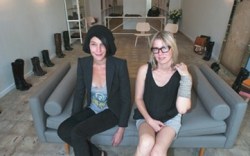 Unfortunately, Adidas won’t be producing the pink-and-yellow Barricade V shoe inscribed with the word “believe,” worn by 17-year-old tennis sensation Melanie Oudin during her phenomenal U.S. Open run. But there is a workaround for tennis fans desperate to pay homage: The company invites them to make their own via the Mi Adidas Website. “We will not be doing any mass production, [but] fans can go onto Miadidas.com — which is exactly the same way [Oudin] did it — and customize their shoes with ‘believe’ or whatever else inspires them,” said a company spokeswoman. Despite her loss to Denmark’s Caroline Wozniacki on Sept. 9, Oudin certainly secured a spot in tennis history last week and will likely become a familiar face for the athletic brand. “She will probably be a lot more prominent in terms of our tennis athletes,” said the Adidas rep.

Rupert on the Run

Special efforts for Fashion’s Night Out, and a showing last Tuesday of the movie classic “The Red Shoes,” made Rupert Sanderson’s week action-packed. “It’s been crazy busy, and I’ve got a stinking cold,” the designer lamented at the movie screening, which celebrated the fifth anniversary of his Bruton Place store in London. “But the show — indeed, the shoes — must go on.” Guests, including buyers from Net-a-Porter, Matches and Browns, were treated to champagne and popcorn while the Bruton store was transformed into a 20-seat cinema. While introducing the 1948 film (reputed to be one of Martin Scorsese’s favorites), Sanderson said he had a personal connection: His wife’s great-grandfather, Hein Heckroth, won an Oscar for his role as the film’s art director. “I wish I was the one who shared his DNA,” he quipped. Later in the week, the designer invited customers to swing by the store and paint a total of 160 pixels that would be used to create a 33-sq.-ft. picture. It will be displayed for a short time in nearby Berkeley Square and then photographed from up high. “We’re aiming to paint a shoe that’s so big and can be seen from space,” said the designer, who added that he was in talks with Google Earth for them to record it. And that’s not all. To celebrate 25 years of London Fashion Week, to be held Sept. 18-22, Elle magazine and Art on the Underground tapped Sanderson and others to create a London-inspired poster to be shown in and around the Tube network later this month. The resulting kaleidoscope-style poster (at left) features Sanderson’s fall ’09 Inferno boot, arranged to echo the wheel of the iconic London Eye.

Mona Moore’s Lisa Dashiell Bush (below, at right, with co-owner Anna Maria Varriano) explained to Insider at a recent cocktail party to celebrate the debut of the new store in Venice Beach, Calif., that she has an unpretentious philosophy about shoe merchandising. Shoes, she explained, are meant to be displayed in a natural setting, in pairs on the exposed cement floor of the store. “I don’t like things that are too posed,” Bush said. “We put the shoes on the floor like you would actually have them in your closet. They fall over and get messy, and they’re better that way. Don’t you think so?” The Moore concept comes to trendy Abbott Kinney Boulevard five years after the first location opened in Montreal. Now both stores, as well as the Website, will stock identical merchandise, including designers and labels such as Parker Ochs, Marni, Ann Demeulemeester and Dries Van Noten. “We have the same inventory in Montreal as we have here, and that’s probably not going to change,” Bush said, sporting a pair of black Phi ankle boots. “People in Los Angeles love to wear boots, and we saw that [the city] really needed a store like this.”

Glass slippers are no longer the stuff of fairy tales. Pasquale Fabrizio, Los Angeles’ shoe cobbler to the stars, has created his own line of glass heels under the Q by Pasquale label. “We get to see all the other designers’ mistakes and we get to see all the imperfections,” he told Insider. “We’ve taken a lot of that knowledge and put it in the shoes. This is going to change footwear design forever.” Styles include titanium heels wrapped in glass, hand beading and acrylic soles with gold leaf. Scheduled to debut in April, 500 pairs will be sold in Los Angeles at Diavolina, H. Lorenzo and Theodore. But alas, for many aspiring Cinderellas, the shoes will remain a daydream: They’re priced at $7,500. But word is that Mattel Inc. is close to licensing the shoes for its Barbie line of clothing and accessories for real women, sold in Mattel stores around the world.

— With contributions from Elisa Anniss