Insider: ACE Card… All About the O… 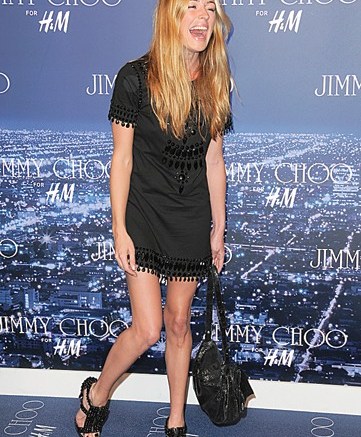 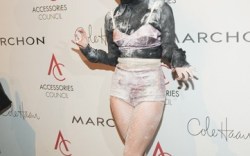 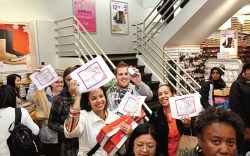 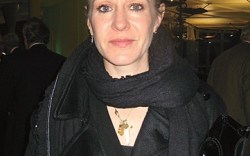 When the Jimmy Choo by H&M collection of shoes, apparel and accessories goes on sale at H&M on Nov. 14, Diablo Cody just may be waiting among the crowd. Insider caught up with the “Juno” screenwriter last week at a private event in the Hollywood Hills — thrown by Choo designer Tamara Mellon and DreamWorks Animation CEO Jeffrey Katzenberg — who joked that she may celebrate the occasion by dressing up. “Maybe I’ll wait in line [outside the store] dressed like a shoe, a provocative shoe with only one strap,” she joked. Cat Deeley (at right), host of “So You Think You Can Dance,” said she had had a shoe-filled day, having stopped by Barneys New York earlier and bought two pairs of Givenchy heels, a pair of Choos and some Christian Louboutin pumps — a lot for the self-described “jeans girl.” But it was all for work, she claimed. “I style myself for the show and I have all my outfits, but I needed shoes,” Deeley said. Will viewers get to see Deeley show off her own moves in any of her new purchases? “Good God, no,” she said. “People would bleed from their eyes if I danced. It would be dreadful. Trust me, I’m doing America a favor by not dancing.”

For every chandelier earring and statement necklace at the Accessories Council of Excellence Awards, attendees had just the right standout shoes to match. At the event, held last Monday in New York, designers, celebs and models came together to honor the fashion-forward. On the red carpet, stylist Robert Verdi, the ceremony’s host, showed off his gold crocodile boots by Paul Smith. Toms Shoes founder Blake Mycoskie — on hand to accept the Humanitarian Award — chose zebra-print slip-ons from his new Neiman Marcus- and Bergdorf Goodman-distributed collection to spice up his black Dolce & Gabbana suit. And actress Molly Sims had lots of personal favorites: “I love the Chloé boots, I love the over-the-knee suede and I love heels — a little leopard at the moment,” she said. But the talk of the event was Stylemaker Award-recipient Lady Gaga (at right), who turned heads in yet another outrageous outfit. What did attendees think? “It’s exciting that somebody has actually made people think differently about fashion,” Verdi said.

All About the O

What do you get when you combine the power of Oprah and the allure of a big discount? Apparently, huge results. At the end of designer Christian Siriano’s Oct. 29 appearance on “Oprah” to tout his apparel line and Payless ShoeSource collab, Oprah announced that viewers could log on to Oprah.com/Payless to get a coupon for 50 percent off everything at Payless. The offer only lasted from Thursday afternoon through the end of Friday, but that didn’t stop hundreds of thousands of shoppers from flocking to the retailer to take advantage of the deal. “We sold more than a million pairs of shoes in a little more than a day,” Payless CEO LuAnn Via told Insider, adding that Oprah had approached Payless with the idea just before the show. And customers were clearly grateful: “This has been a tough year for us with a double job loss,” wrote one shopper on the Oprah blog. “Thanks to the coupon, I was able to buy my family new shoes for the winter, something I had been putting off because of the expense.” Oprah kept the shoe theme going last Monday in the “Shoe & Bag Intervention” episode, where guest stylists doled out advice on which shoes and bags flatter — Cole Haan and Christian Louboutin — and which ones don’t.

Best of the Brits

Some of London’s biggest footwear names, from Nick Rayne to Georgina Goodman (at right), gathered last Tuesday at East London’s Geffrye Museum to salute new British talent at the Footwear Friend’s Annual Designer Awards. During the evening, Richard Kottler, CEO of the British Footwear Association, unveiled a new honor: the FN Platform/BFA Award. The award was given to Lorna Jones of Rakish Heels and Rebecca Abrahams of Velvet Bee, who were both given a free booth at the new trade show, which launches in February as part of Magic. “Offering new talent a platform within the established U.S. footwear marketplace was our way to support the talent coming out of the U.K.,” said Leslie Gallin, VP of footwear at Advanstar Fashion Group, the owner of Magic.