From the Archives: George Malkemus Inducted Into FN’s Hall of Fame 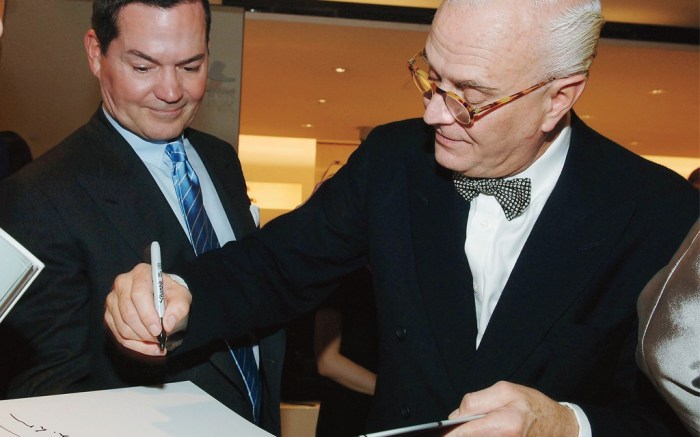 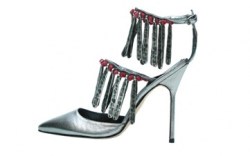 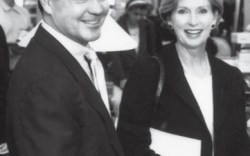 Editor’s Note: FN is looking back at the life of George Malkemus. This story appeared in November 2009 when Malkemus was inducted into FN’s Hall of Fame.

Would these iconic names have achieved so much success without the help of a powerful partner? Doubtful.

For the past 27 years, Malkemus has worked feverishly away from the limelight, helping to turn business partner Blahnik, once a fledgling designer with tiny sales in the U.S., into a $100 million empire.

Malkemus, 55, continues to spend months on the road visiting retailers and factories. He closely watches the company’s financials, strategically builds buzz with the press and works closely with the brand’s retail partners. And, as he explained, “does lots of hand holding” when the designer comes to the States twice a year.

“It’s a balance thing for us,” Blahnik told Footwear News. “George is a very good businessman. He’s patient. I am not. When it comes to money and things like that, I’m totally innocent. I don’t want to know. It’s always been my strength not to be involved in the business end. George is very constant. You can count on him. He knows what people want, what the big stores want, what the ladies of certain states want — he’s very good at those things, which I am not.”

Clearly, Blahnik is very good at other things. As he has consistently created timeless shoes for the cool-girl crowd and elegant older women, Malkemus has been the steady hand behind the U.S. business, which accounts for roughly 85 percent of the brand’s total sales.

Sure, the firm’s good fortune appears to have come pretty easily, thanks to some pivotal moments, such as starring turns in several episodes of “Sex and the City” and a scene-stealing moment in the big-screen version, but Malkemus and Blahnik never set out to become a money-making machine.

“We made a deliberate decision to grow our company very slowly,” said Malkemus, who bought the North and South American rights to Blahnik’s name in 1982, after a brief meeting when the two spoke about their love for — and ownership of — Scottish Terriers. “Neither of us were greedy. We wanted to do this at our pace and to learn the ropes as we went along. That way, the mistakes we’d make would be small mistakes rather than large ones, and that’s the philosophy we’ve always kept.”

Before he met Blahnik, Malkemus thought he wanted to be a doctor, but soon decided to pursue writing. So he left his home in San Antonio, Texas, and eventually landed a job as copy chief at Bergdorf Goodman in New York.

By day, he penned sparkling prose about shoes for the department store. At night, Malkemus hit nightlife haunts like Studio 54, where he befriended designers Perry Ellis and Calvin Klein — contacts that would prove invaluable years later.

After partnering with Blahnik, the young exec approached the fashion designers and asked if they would use Manolo Blahnik shoes for their runway collections. They did.

That’s when Neiman Marcus called. The department store bought the two shoes Blahnik designed for Calvin Klein, ordering just 30 pairs for its Beverly Hills, Calif., store and another 30 for its San Francisco door.

Oh, how times have changed. Under Malkemus’ leadership, Manolo Blahnik shoes, priced from $675 to $1,200, are now in every Neiman Marcus store in the U.S., and in select Bergdorf Goodman, Barneys New York, Saks Fifth Avenue and Nordstrom locations, as well as in 14 independent retailers. The brand also has two stand-alone stores, in New York and Las Vegas.

“George is first and foremost a merchant,” said Karen Katz, president and CEO of Neiman Marcus Stores. “He approaches each new season with that perspective, knowing what the customer is looking for, what needs have gone unfulfilled, what worked in prior seasons. He works with Manolo Blahnik to design a terrific assortment of shoes for our customer.”

Case in point: When the economy first showed signs that consumers were rejecting luxury goods, Malkemus urged Blahnik to introduce a few shoes that could sell for less than a traditional pair. That advice resulted in a $395 ballerina for fall ’09 — that he said has sold well into the thousands — and a thong for spring ’10.

Those items kept consumers coming and the company’s factories working.

“George Malkemus has kept Manolo Blahnik on top even in recessionary times,” said good friend and Vogue Editor-at-Large André Leon Talley, who initially introduced Malkemus to the designer. “It’s because of the combination of George’s superior foundation, marketing and strategy skills for the brand, and the originality and creativity of the shoes by Manolo, that the organization and Manolo’s celebrity status is kept at a white-heat level.”