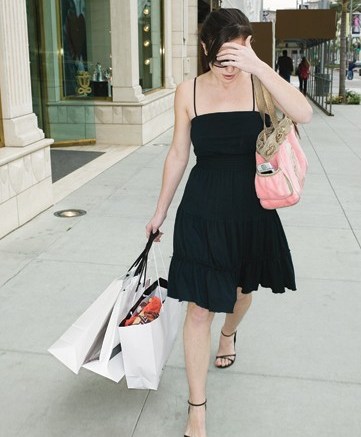 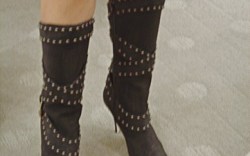 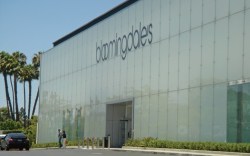 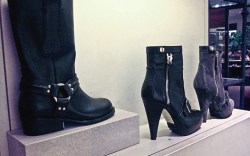 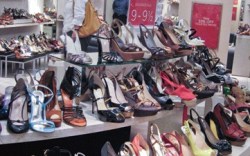 Even in the world of high-end, luxe stores and dazzling designer brand names, it’s a consumer’s market.

Our shoppers were given a simple task: To find a fun, stylish designer boot for fall. They were both asked to also take notes on what they saw and heard inside the departments, including their observations on the best bargains — and there were many to be found — best fit, hottest looks and the quality of the service they received.

It’s not exactly a shocker that department stores have been slashing prices to drum up business, and our shoppers found plenty of customers eager to take advantage of the marked-down goods. Brian Atwood slingbacks were 60 percent off already reduced prices, at $225.

That’s not to say stores are shying away from more expensive shoes. Barneys New York was selling a Christian Louboutin yellow crocodile pump for $4,600. But stores varied in how much fall product they carried, and one retailer even featured a boot from 2008 in its display window.

In general, our shoppers found the service to be helpful and straight forward, with a few pushy salespeople clearly hoping to bank a commission, while others provided more aloof assistance.

What follows are the in-depth findings, experiences and opinions of our two seasoned shoppers.

Location/date/time: 9700 Wilshire Blvd.; Friday, July 3; 4 p.m.
The environment: What recession? Customers perched on padded chairs with their little dogs, surrounded by exploding tissue-filled boxes of designer shoes.
Number of salespeople/customers: 10; 40
Prevalent brands: Christian Louboutin and Manolo Blahnik almost fill the main shoe wall. Roger Vivier occupies a large corner.
Styles in play: Pre-fall brings the first boots of the season, from the ubiquitous ankle length to daring thigh-highs. It’s not practical, but many feature uppers made of lace.
Trend watch: The look was bold with deep covered platforms, spike heels and cutouts. Bright, brazen gold is making a comeback.
The service: The lack of eye contact from the well-dressed salesmen made me wonder if I had forgotten to brush my hair — or my teeth. I walked the floor for 15 minutes, then seated myself and put my handbag on the next chair, clearly settling in. Still, no one approached.
Then, it hit me: Each woman had her own personal salesman, and he was catering to her alone. Early-season shoppers at Neiman Marcus belong to an exclusive club. Once you’re a customer, you’re in. I flagged down a young saleswoman and she was enthusiastic without giving me a hard sell.
Yes, we have it: I had to go up or down a half size, and they were able to accommodate me. But a Chanel mesh boot was already sold out, at $1,425.
Most expensive: Christian Dior’s crystal platform pumps, at $2,250.
Least expensive: Very little starts below $350.
It’s a steal: The sales racks, shoved to the side, were 33 percent off, with an additional 25 percent markdown.
Top pick: Chanel stretch leather knee-high boots with a black patent toe cap and ruffle for $1,350. They could easily wiggle over dark stovepipe jeans. Still, I couldn’t stop strutting in Manolo Blahnik’s studded, spike-heeled boots, at $1,595.
Lasting impression: Deep selection from top brands, but the initial lack of service was a turn off.

Location/date/time: 3333 Bristol St.; Sunday, July 5; 1 p.m.
The environment: This is a working shoe department with plenty of women trying on a couple of pairs.
Number of salespeople/customers: 6; 30
Prevalent brands: The department combines designer names with lines that are affordable and comfortable. Jimmy Choo and Prada take prime positions, but Manolo Blahnik has only a small bay. Taryn Rose, Stuart Weitzman, Donald J Pliner and Anyi Lu are more important here.
Styles in play: Flats, loafers and low pumps predominate, as well as the occasional eye-opener such as orange stilettos by Moschino Cheap & Chic.
Trend watch: Engineer boots with lug soles, kitten heels and wedges, including Prada’s tall, scrunchy suede.
The service: Salespeople gave me a polite “hello,” with no further questions until I was ready — just my style.
Yes, we have it: I vary between 7 1/2 and 8, or 37 1/2 and 38, and both sizes were available.
Most expensive: Jimmy Choo’s rabbit-fur-lined biker boots, at $1,050.
Least expensive: Burberry plaid rubber rain boots for $175.
It’s a steal: Sale shoes were on second markdown, at 60 percent off, making Brian Atwood’s slingbacks $225.
Top pick: With such a large display of Jimmy Choo, I couldn’t pass up the Peony boot in black leather with a back zip, for $965.
Lasting impression: These are friendly salespeople who won’t sell you a gimmick, but the department needs more marquee brands to really stand out.

Location/date/time: 3333 Bristol St.; Sunday, July 5; 3:30 p.m.
The environment: We were a little early for the party here. The Chanel collection was the only brand with fall boots. When I asked for a Stuart Weitzman knee-high boot, prominently displayed, it was only available in size 10 because it was from a previous season.
Number of salespeople/customers: 3; 20
Prevalent brands: The shoe department is divided into three linked rooms, with the designer brands in the second one. Christian Dior has the most real estate, along with Stuart Weitzman. There’s an eclectic collection of smaller lines, including Jean-Michel Cazabat, Chie Mihara and Pedro Garcia, so when the full stock is in, there may be some finds.
Styles in play: Heels, the higher the better. Even espadrilles towered on mega-sized wedges.
Trend watch: For boots, variations on flats — not the super-flat of past seasons, but short stacked heels and lug soles.
The service: Salespeople were patient, but overworked. My own was physically pulled away by a teenage girl carrying a Louis Vuitton bag, trying on every Chanel flat on display. But she laid down $345 for the brand’s jelly sandal, so I understood why he was torn between us.
Yes, we have it: With so little that was new, all sizes were available.
Most expensive: The Chanel chestnut boots, at $1,500.
Least expensive: Fendi rain boots for $210.
It’s a steal: Bloomingdale’s took an additional 40 percent off marked down shoes, so a Sergio Rossi eelskin slingback was $261, from $625.
Top pick: Christian Dior had the widest selection to choose from, so Iwent for a black, knee-high boot for $1,090.
Lasting impression: Fifteen percent off brand-new merchandise was a decent incentive, but a lot of the stock was dated.

Location/date/time: 754 Fifth Ave.; Monday, June 29; 10:30 a.m.
The environment: The luxury store had a large number of sale items in virtually every department. Throughout were pink signs advertising as much as 70 percent off. The second floor designer shoe department was more than half filled with crowded, 50 percent-off sale racks.
Number of salespeople/customers: 8; 30
Prevalent brands: Manolo Blahnik had by far the biggest selection. Chanel, Prada, Jimmy Choo and Christian Louboutin were also well represented. Among other designer brands on display were Lanvin, YSL, Gucci, Miu Miu, Balenciaga, Gravati, Azzedine Alaïa and Tod’s.
Styles in play: There was a sizeable offering of early fall merchandise, including ballet flats, loafers and boots, but the biggest chunk of the floor was for the summer sale merchandise, most of which was sandals.
Trend watch: The early fall shoes on display were fairly conservative, with a lot of black leather flat boots and suede loafers. Among the more directional looks were suede ankle styles with fringe and motorcycle inspired leather boots with studs.
The service: When I first walked in, the group of salespeople, all men, were chatting with each other about sports, and none asked if I needed help. When I finally did approach one of them for assistance, he was friendly and helpful and suggested some boots I might want to try on along with the ones I asked him to get.
Yes, we have it: Four of the five boot styles I wanted to try were available in my size, 6 1/2. The other style came in a 7, which I also tried on.
Most expensive: An Azzedine Alaïa handmade sandal retailing for $2,475.
Least expensive: Tod’s loafers knocked down to $198 from $395. It’s a steal: With all the summer designer sandals marked 50 percent off, there were many steals to be found. The sale racks had a lot of Manolos for less than $300.
Top pick: A black, knee-high Gravati black boot. It offered comfort and style. Lasting impression: A nice selection of fashion-forward designs, but the plethora of sale racks took away from the luxe shopping experience.

Location/date/time: 611 Fifth Ave.; Wednesday, July 1; noon
The environment: Throughout the store were big signs advertising sales. The large shoe department featured new fall merchandise attractively displayed in the middle of the floor, while the sale offerings were located along the outer rim of the circular room.
Number of salespeople/customers: 20; 50
Prevalent brands: Roger Vivier shoes and handbags had the biggest presentation. There was also a large selection of Christian Louboutin. Other brands included Chanel, Fendi, Dior, Ralph Lauren, Prada, Oscar de
la Renta, Stuart Weitzman and Gucci.
Styles on display: Knee-high boots, strappy sandals, loafers, ballet flats.
Trend watch: Many fall boot options, including flats and a variety of heel heights.
The service: The sales staff was a little aggressive and clearly worked on commission. But the man who helped me was patient and helpful.
Yes, we have it: Everything was in my size.
Most expensive: The salesman pointed me to a Christian Louboutin crocodile slingback shoe selling for about $2,500.
Least expensive: A Taryn Rose sandal was marked down to about $60.
It’s a steal: Shoes were marked down by half and then were selling for another 33 percent off. Some Dolce & Gabbana sandals were marked down to $250 from $550. There were plenty of Manolos, Jimmy Choos and Pradas selling for less than one-third of their original prices.
Top pick: With a perfect fit, a Chloé knee-high boot with a buckle was the clear winner.
Lasting impression: Great selection and helpful, friendly service, though the big department can feel a bit overwhelming

Location/date/time: 660 Madison Ave.; Wednesday, July 1; 3 p.m.
The environment: There were a lot more directional offerings and some brands you don’t find in many other stores. I was surprised that the sale racks literally blocked my way when I got off the escalator on the
fourth floor. About two feet from where I exited I was face to face with large and disorganized shoe racks.
Number of salespeople/customers: 10; 20
Prevalent brands: Christian Louboutin, Costume National, Stella McCartney, Chanel, Prada, Balenciaga, Vero Cuoio.
Styles on display: Ankle boots, ultra-high heels, sandals and cowboy boots.
Trend watch: Many of the styles featured special treatments, such as rhinestones, grommets, tassels or wood
heels. The shoe styles sold here are for those who definitely want to make a statement with their footwear.
The service: It was very hard to tell who the salespeople were since they were wearing more casual clothes — not suits — and they did not have name tags. But a welldressed saleswoman approached me soon after I started browsing and gave me great assistance.
Yes, we have it: They had three of the four of the boots I wanted in my size.
Most expensive: A Christian Louboutin yellow crocodile pump for $4,600.
Least expensive: The Barneys brand sandals, on sale for less than $200.
It’s a steal: Shoes in this section were marked down significantly, and then were selling for another 25 percent off.
Top pick: A Marc Jacobs boot that felt great and looked like it would go well with skirts and pants.
Lasting impression: Very fashion-forward shoes that won’t be found at other stores, but some might be a little too directional and seemed like they’d be highly uncomfortable.