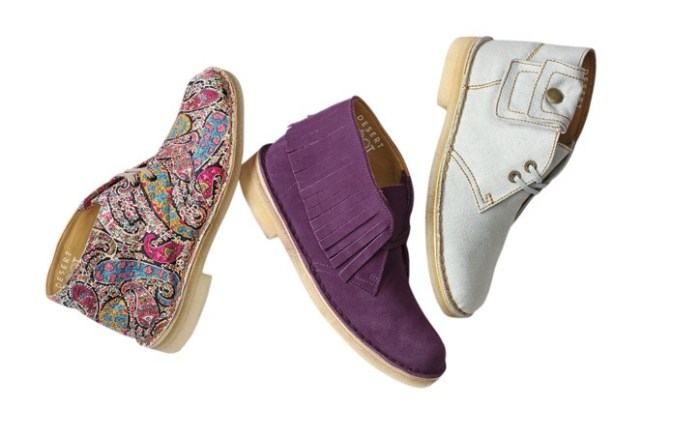 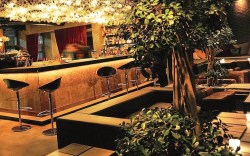 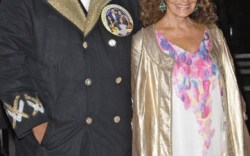 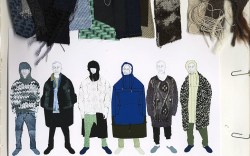 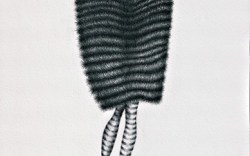 Just Deserts
Clarks’ Desert Boot is entering its golden years — in more ways than one. The ever-popular, crepe-sole boot, which turns 60 this year, is staying young with a limited-edition collection for fall. Bill Riley, director of marketing for Clarks Originals in Upper Newton Falls, Mass., said, “It seems like only yesterday we were celebrating the Desert Boot’s 50th anniversary. Ten years later, the shoe is as fashionable as ever. This year’s celebration is an ode to pop culture and the corresponding fashion ethos from decades past. We celebrate the lasting power of an icon and the cyclical resurgence of a true classic.” The Anniversary Collection pays homage to the style and culture of each of the boot’s six decades. Included in the offering is a 1950s-inspired style for men, reinterpreted in genuine Harris Tweed reminiscent of a vintage blazer, while the 1960s-era women’s style uses a flowery paisley print from Liberty of London. Harking back to the 1980s is a women’s look in faded denim, with the 2000s represented by an original sand suede style for men. The boots will be sold at select Clarks and Nordstrom stores beginning Oct. 15, with the women’s available only by special order at Clarks stores or by phone. Retail prices range from $100 for women’s to $115 for men’s. Each pair comes with a special commemorative booklet.

Dining Diesel
Renzo Rosso, founder of fashion and lifestyle brand Diesel, has opened his first restaurant. Named Circle, the chic eatery and lounge is located inside the company’s headquarters in the Zona Tortona section of Milan and is sure to be a favorite with the fashion week crowd. The menu features Italian culinary specialties, while the wine list is filled with Rosso di Rosso and Bianco di Rosso vintages produced by the Diesel Farm. Open seven days a week, from 7 a.m. to 2 a.m., Circle will host Diesel staffers as well as Milanese locals for breakfast, lunch, dinner and drinks. A DJ booth occupies prime real estate in the space, and international DJs are on the decks every night. Circle can be found at Via Stendhal 36, Milan.

Chic Charity
Philanthropic groups have been hard hit by the recession, and the RFK Center for Justice & Human Rights is doing its part to add value for benefactors. This year’s annual charity auction, hosted by Charitybuzz.com, is its largest ever and features several high-end experience packages for the fashion flock. For a price, the highest bidders can spend a day with Vogue editor-at-large André Leon Talley at New York Fashion Week, score a month-long internship with Diane von Furstenberg, or talk style with Tim Gunn over lunch at Bryant Park Grill. “Funds raised by the auction support the center’s advocacy work empowering the survivors of violence and torture in Darfur, impoverished communities in Haiti, the victims of slavery in the U.S. agricultural industry and Gulf Coast families still recovering from Hurricane Katrina,” said RFK Center spokesman Jeffrey Buchanan. There is still time to place your bid and benefit the world. Log on to Rfk.charitybuzz.com and take action. The auction ends on May 28.

School’s Out
Graduate fashion students at London’s Royal College of Art are getting one last final exam. In honor of the Master of Art program’s 60th anniversary, the Victoria & Albert Museum is showcasing the work of top graduates from the class of 2009 in a new show called “Future Fashion Now.” Curators sourced sketchbooks and prototypes, as well as finished product, to make up four sections, dubbed Concept, Form, Technique and Detail, which illuminate the students’ creative processes. And industry insiders take note: Since it’s inception, the RCA has launched the careers of lauded designers such as Ossie Clark and Julien Macdonald, and countless alumni have landed in fashion houses including Galliano, Vivienne Westwood and Dior. Among this year’s class, two emerging shoe designers are on the rise: Nina Hjorth’s architectural stilettos made the curator’s final cut, as did ornately bejeweled footwear by Benjamin Shun Lai Ng. “Future Fashion Now” runs from May 22 through Jan. 31, 2010, and the free admission makes it extra student-friendly.