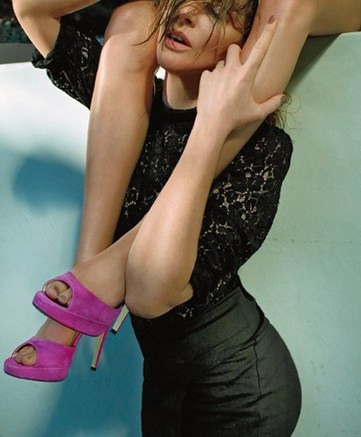 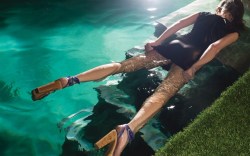 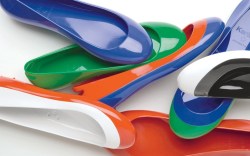 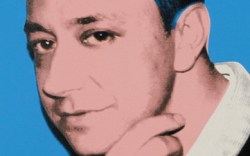 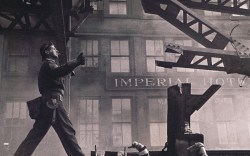 Brian Atwood is adding a coffee table tome to his already impressive list of accomplishments. The designer was looking for the perfect woman to embody the bold qualities of his spring shoe collection, so he went straight to the source and tapped Rene Russo to star in a steamy photo book, aptly named Role Play Rene. “I wanted an icon, and I loved her in the ‘Thomas Crown Affair,’” he said. Shot by photographer Tony Duran in his Los Angeles digs, Russo’s characters (shod in Atwood’s spring stilettos) find themselves in a variety of sexy scenarios. The designer said he was inspired by the supermodels from the Sixties and Seventies. “Rene is beautiful, fun, talented. … It was fun to see the ‘supermodel’ come out of her.” Only 1,000 copies were printed, to be given away to Atwood’s friends and fans. Now that’s intimate.

Italian design giant Kartell is dipping its toes in the footwear game for spring. While the firm may be known for modern furniture and lighting, it created its debut shoe line, dubbed “Glue Cinderella,” with fashion label .normaluisa. The result is an eye-popping assortment of colored plastic ballet flats crafted with Kartell’s signature injection-molding technique. Sure, it may seem an unlikely pairing, but Kartell marketing chief Lorenza Luti said the footwear launch was long in the works. “The idea came out over a year ago, while speaking with the designer of the fashion brand .normaluisa,” she said. The two creative teams came up with a product both “chic and easy to wear.” Luti said the fashion house was a natural choice to work with. “.Normaluisa is a company I have known and loved for its feminine and timeless style,” she said. The Glue Cinderellas have thoughtful and fashion-forward details such as low-cut uppers and holes in the back for easy portage. And the line is catching on fast. Kartell is ramping up distribution in independent boutiques as well as its flagship stores, and fall ’09 styles are in the pipeline. Prices start at $135.

For the first time since Andy Warhol’s death, more than 140 of his subjects will be in the same room — or at least their portraits will be. “Warhol’s Wide World,” the largest exhibition of the artist’s work, pays tribute to the portrait genre that he helped revive. Among the many faces are fashion figures Giorgio Armani, Sonia Rykiel and footwear’s own Ernesto Esposito. “I was working in New York and I asked Andy to do a portrait of me, but he said no because I wasn’t so famous,” recalled Esposito. “But he changed his mind when I told him I was a shoe designer.” According to Esposito, he spent a day at the Factory, where Warhol photographed the designer and asked him to draw several shoe sketches. (Warhol himself got his start doing fashion illustration.) Esposito’s portrait was one of the last completed by the artist before his death in 1987. The exhibition runs from now through July 13 at the National Galleries of the Grand Palais in Paris.

Who says New Hampshire and New York have nothing in common? To celebrate its newly bowed Soho store, Stratham, N.H.-based Timberland is hosting “Nature of a City,” a photography exhibition of New York through the ages. “Timberland has always had a robust presence in New York City, and we are honoring our New England roots,” said Theresa Palermo, senior director of marketing for Timberland North America. “The images in the exhibit capture the energy and vitality of a city that — like Timberland — is constantly evolving, creating and defying trends.” Brooklyn publisher powerHouse Books helped curate the black-and-white, color and digital photos and placed them within the store’s 2,000-sq.-ft. space, where they will remain from March 27 through April 29.