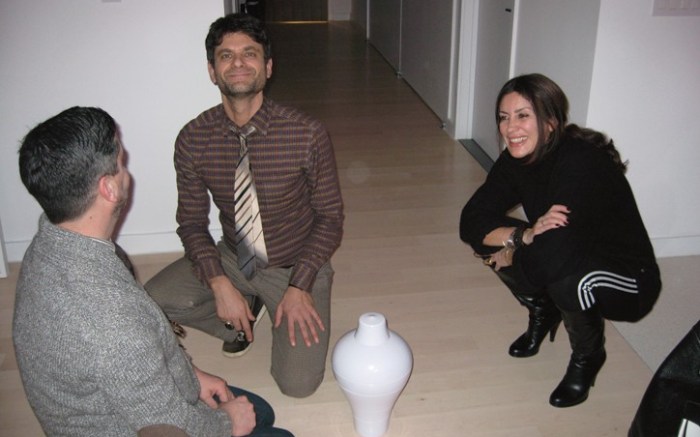 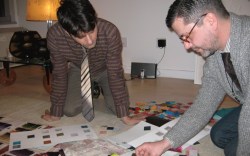 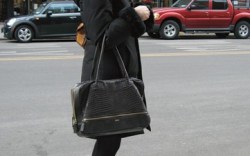 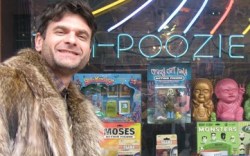 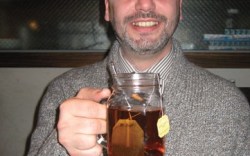 As I enter the rustic Gottino wine bar on Greenwich Avenue to meet Guillaume Hinfray for lunch, I notice his choice of eateries suits the hard-edged glamour of the brand, inspired by Guillaume’s experiences in his native Normandy, land of the Vikings. Guillaume is sitting at a table with his co-designer and partner, Marco Censi, and New York marketing director Roberta Frattini. The design duo has just arrived for FFANY market week in New York, flying in from Milan, where they spend most of their time.

After getting his start in haute couture and then working for Hermès and Lanvin, Guillaume “discovered shoes in Milan with Marco,” he says. First working at Bottega Veneta and then as the chief designers at Salvatore Ferragamo, the pair launched their own collection under the Guillaume Hinfray moniker in 2002. Guillaume says he found working in haute couture similar in complexity to making shoes. “[But] shoes may even be the most difficult,” he adds. “You can hurt somebody with a bad shoe.”

Speaking about his design influence, Guillaume says, “I’m very fixed by Normandy’s history — it is the base of my imagination, and Marco is obliged to follow.” “I take care of the ironic touch,” Marco chimes in, adding that he likes illogical things, such as “women wearing heels in the supermarket,” or the 1953 movie “Niagara,”where Marilyn Monroe runs from a killer in stilettos. This leads to a discussion of about women’s heels. “High-heel shoes are the biggest weapon for women for sexiness,” Guillaume says. “Our dream is to create the modern warrior woman who has come back in modern times in heels.”

Guillaume and Marco talk about creating their own brand and stress the difficulty of finding a niche in the crowded accessories market. “Our look is something very contemporary and metropolitan, but also with medieval references,” Marco explains, noting that the metal ornament on each shoe matches the piercing on Guillaume’s eyebrow. A special challenge is having to compete with big designer brands with far superior resources. “At Ferragamo, we had 20 assistants, models, etc. Now, back in our office, we had to create an equally powerful collection by ourselves,” says a laughing Guillaume. The couple also consults for other brands, including a high-end men’s collection. Marco proposes another challenge for an accessories brand: “You have to have a lot of humility because you don’t have control over the total look.”

As we wrap up lunch and take a taxi to Bread on Spring Street, Roberta gives us a restaurant tour of Soho. Guillaume and Marco tease Roberta for being a foodie tour guide, but she says that Guillaume is secretly a masterful chef and they all love food. The group assures me double lunches are not the norm, but we are on our way to meet Claudia Rose Iliprandi, who with her husband, Alessandro, owns the prestigious Bonaudo Tannery.

After a quick dessert and coffee at Bread, we head with Claudia to the group’s jointly owned apartment in the new Chelsea Modern building. I’m struck by the fantastic art waiting to be hung there. And a sleek coffee table, beanbag-style chair and installation by artist Marco Perego with the words “People come here to live” in neon pink are impossible to miss. As well as having a lasting business partnership, Claudia and the designers are also close friends and have been furniture shopping to fill their new shared space. They weren’t able to find the perfect table yet, so Claudia proposed they stack oversize books along the windowed wall to act as a table. Ironically, the collection found its start with a classic Richard Avedon coffee table book.

Next, we pow wow on the floor to pick the new color palette for spring ’10. Guillaume sets the mood. “We need something very clean, peaceful, elegant, very feminine and maybe less aggressive,” he says. “Maybe our warrior woman takes a vacation. We start with an atmosphere of colors, pictures, a story and a few iconic shoes or people.” Marco adds, “We have to have humility as we ask ourselves if our woman likes to buy shoes in this color. We don’t have to make a fake, optimistic palette, but give people a faintly optimistic and self-confident neutral color.”

Along with an enormous selection of swatches, Claudia reveals the tannery’s proposed palette for spring ’10, explaining that she is known for her natural colors. “For spring, it’s a faded palette, as if a shadow is pausing on the colors,” she says. I inquire about how this palette is created and the benefits of using those particular neutrals. “There are many more variations in materials if you choose within the palette,” the designers confirm.

Our conversation turns to value in the rough economic climate, and Guillaume responds, “To create shoes that are expensive, you must make them worth it, so it will be a source of satisfaction to use them. It will be extremely important to go back to the value of the product this year.” I thank the designers for including me in the first brainstorming session for 2010. Marco tells me it will be a week-long process at least. “We start, get the motor hot …,” he says. “Then I get nervous!” Guillaume confesses. “And then we start over again the next day,” Marco finishes, adding that “many designer couples create together, but we have to make an effort to come to the middle to move forward.”