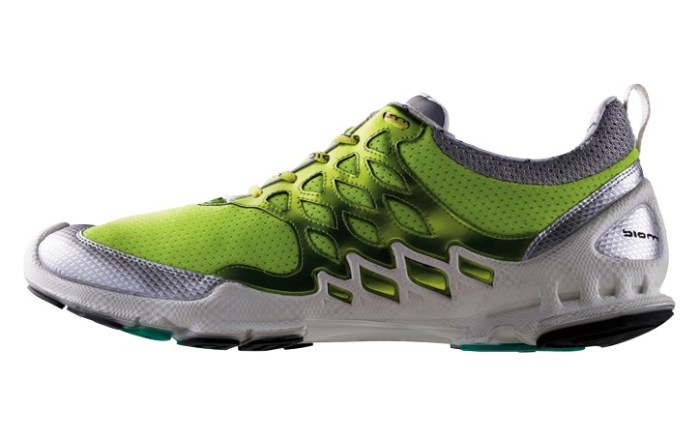 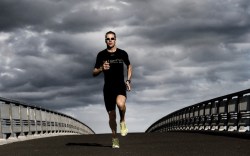 Three years ago, Ecco decided it was time to change things up.

The brand was doing a steady business with its traditional cemented running shoes at comfort, walking and Ecco stores, but execs saw an opportunity. “In all our categories, we have a pinnacle product, a direct-injection product,” said Dan Legor, senior marketing manager for the Londonderry, N.H.-based company. “The one place we didn’t have the direct-inject product was in running.”

Direct-injection — the process of creating shoes with TPU outsoles attached directly to the uppers — is one of Ecco’s specialties. Execs at the brand had a hunch that leveraging that direct-inject heritage in running could create compelling product — and provide an entree into the ultra-competitive specialty running market.

But creating a running shoe that fit the bill took time. The new Biom collection, which hits stores next month, is the result of three years of development, countless revisions and a few delays along the way. But even in a tough economy, the brand’s hopes for the line are high.

Ecco turned to an expert to help bring its ideas to life. Professor Peter Brüggemann, a biomechanist from the German Sports University in Cologne, was brought in to consult on the line. Based on Brüggemann’s findings, Ecco made a radical decision. Its new line wouldn’t be divided among running’s traditional categories — cushioning, stability and motion control — but would be segmented according to how fast a runner runs. The A, B and C lines are targeted to runners with average mile times of 6, 8 and 10 minutes, respectively. All the shoes feature a flexible forefoot angled for more spring in the pushoff, a rounded heel construction that centers the landing point under the heel and a biomechanical outsole that, the company said, encourages a more natural gait. The A shoes are the closest to the ground, while the B and C shoes add more cushioning and more support to the midfoot.

The Danish brand also wanted to leverage its shoemaking history. After scanning the feet of 2,500 runners, new lasts were created, and yak leather, a specialty of the Ecco tanneries, was chosen for its flexibility, breathability and strength.

The technical story is what Ecco counted on to get the shoes into specialty running retailers, according to David Helter, general sales manager for performance at Ecco. But looks were important, too. “For the U.S. market, aesthetics is the ticket in. No one wants a homely shoe,” he said. Also important was learning what the channel wanted, not only from the product but from a running brand. “We were meeting with running specialty [accounts] before we even had a sample in hand,” Legor said. “They want to know we’re there to support them with customer service, inventory and answering questions.”

In mid-March, the A and B versions of Biom will hit retail. The A will be available for men only; the B will come in both men’s and women’s. Both versions will be available in yak leather for $220, and in synthetic textile for $195. This summer, a men’s and women’s trail version of Biom on the B platform will roll out, followed later this year by the C version — the shoe with perhaps the biggest potential audience.

Of course, the timing isn’t ideal. Biom is debuting in one of the worst retail environments in recent memory — and at a time when the shoes’ $195-to-$220 prices will be keenly felt.

In its defense, Ecco said launching in spring ’09 wasn’t the original plan. “The [development] process probably took longer than we anticipated,” Legor explained. “I don’t think we expected it to be a three-year journey. But as we spent more time, we realized there are things here that go beyond just developing another running shoe.”

But Legor said Ecco remains optimistic about the product. “[Right now], one of the few categories that’s continuing to grow is running specialty. People are more and more conscious of health, and they’re making the time to invest in running.”

The launch will be smaller than originally anticipated. Helter said that Biom will debut in about 30 running shops, instead of the 50 targeted. And while Helter said he’s encouraged by the feedback he’s received, the company is being realistic.

“We’re on a much slower growth curve, and the economy is going to affect us this year, and we know that,” Legor said.

Retailers that have signed on for Biom’s launch are excited about its possibilities. They say Ecco has taken the time to understand what they — and their consumers — are looking for.

John Rogers, owner of Maine Running Co. in Portland, Maine, said he’s seen the shoes from the first prototypes and is eager for them to hit the shelves. “It’s a fresh approach, and that’s something we always need,” he said, adding that the Biom line could compete with other shoes that focus on runner’s gaits, including midfoot-focused shoes from Newton and New Balance.

Matt Lucas, president of Dallas-based running chain Luke’s Locker, did not expect the line’s higher prices to be an issue. “It probably would be [a concern] if it were a brand-new price range for us,” he said. “But we carry things in that range now.” Luke’s Locker sponsored a meet and greet during last fall’s Running Event between its staff and customers and Torbjørn Sindballe, an elite Danish triathlete who is the face of Biom and was an instrumental part of its development. “For us, the test [of a shoe] is whether our staff is happy when we tell them we’re bringing them in,” Lucas said. “And they were.”