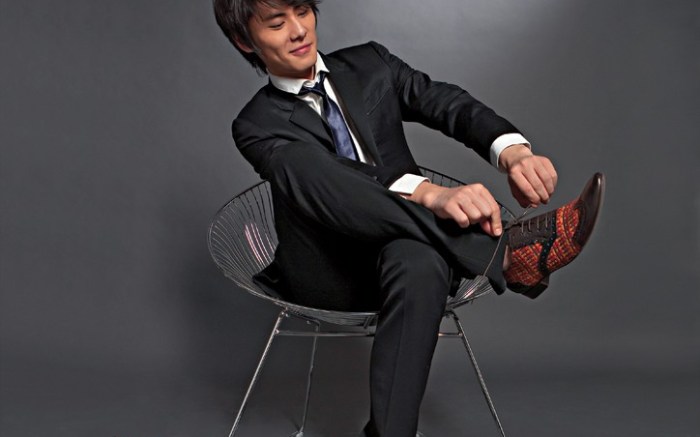 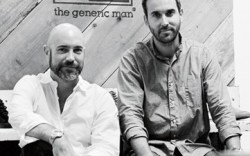 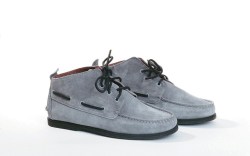 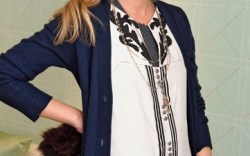 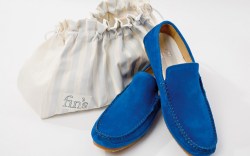 The men’s market is opening up, but can a bunch of newcomers find a receptive audience with their clean designs and moderate price points?

Old adages may be dying out. Case in point: There’s an accepted logic that says men hate to shop, but the numbers tell a very different story. And even in the depths of the current economic crisis, many companies are looking at the men’s market as a golden opportunity.

According to research by The NPD Group, sales in the men’s footwear sector have held up better than women’s in recent months, if only slightly. For the 12 months ended November 2008, men’s footwear sales decreased by 2.7 percent from the preceding year, compared with a decline of 3.5 percent in women’s. For their part, many retailers say their men’s businesses are also seeing strength for the period.

In its most recent earnings report for the third quarter, Saks Fifth Avenue listed men’s shoes as one of its better-performing categories, while women’s shoes saw “widespread weakness.” And both Saks and Bloomingdale’s moved their men’s footwear departments to more heavily trafficked areas of their stores in the second half of 2008.

At American Rag in California, footwear buyer Courtney Rotolo said the store’s men’s shoe business has picked up over the past year. “There is more emerging in men’s brands for customers looking for more than sneakers and dress shoes,” she said. “There’s a middle range that guys are picking up on that really needed to be addressed. In response to that, designers are taking it and running with it.”

Indeed, an impressive number of startups have set their sights on the men’s footwear market in the last couple of years. By identifying a need in the market and developing a fresh concept, new names such as Fin’s, Generic Man, Heutchy, Narrative Footwear and Ryan Rowe are hoping they have what it takes to make it during a tough time.

Opportunity Knocks
Today’s ecomonic climate calls for simple shoe designs, according to a number of designers and retailers.

“Wild fashion is out,” said Tarek Hassan, co-owner of The Tannery in Boston. “Men’s [footwear has] definitely gone a lot more toned down. Even if it’s a dress shoe, it has to be classic — suedes, browns, that type of feel.”

All the new brands that spoke to Footwear News said they are filling a void for basic styles that men can wear for multiple seasons — and get at an affordable price. Generic Man even put that concept into the name of the company.

Partners Kevin Carney and Brandon Day grew up in a culture of surf and skate, but as they got older, they felt there was a demand in the market for shoes for recent grownups, or “newdults,” as they like to call them. Their line debuted in fall ’07 and uses the term “generic” in the best sense of the word.

“It’s a way to describe how you can let your own personality and your own style come through, as opposed to letting labels dictate what your style is,” said Carney, who designs the L.A.-based brand.

Alexandra Finlay, founder of Fin’s in London, decided to focus on one loafer in a huge variety of colors when she unveiled her brand last March. By concentrating on the one style, Finlay said she wanted to make a shoe that would appeal to every man. And at 80 pounds sterling (about $110 at current exchange), they are meant to be more affordable than similar loafers on the market.

“Keeping it as simple as you can [is the way to go],” said Finlay. “It’s been done in the women’s market with French Sole, and I didn’t think there was a male equivalent.”

Still other designers said they discovered market opportunities when they couldn’t find shoes they’d like to wear themselves. In fall ’08, Heutchy (pronounced hi-CHEE) started with five styles that founder Wells Stellberger wanted in his own closet.

“I’m not going to wear the exciting, crazy shoes. It’s not me,” New York-based Stellberger said. “I consider myself more casual and easygoing.” The result was a carefully edited collection of five styles made of Japanese canvas and Italian leathers (the line is now manufactured in Argentina).

By contrast, Brighton, England-based Narrative Footwear launched with 50 styles made in Italy. Creative Director Scott Emerson had been head of menswear for the U.K.’s Kurt Geiger and had designed for three of the store’s brands. (He continues to make shoes for both Alexander McQueen and Officine Creative.) But he, too, had himself in mind as the potential consumer.

“If I tried to target somebody I don’t understand, then I am just going to get the product wrong,” Emerson said. “The cool guys I see on the street don’t stick to one look from day to day. I want to offer something to that customer.”

Ryan Ringholz, also an accomplished shoe designer for Puma, New Balance and Diesel, was on the lookout for his idea of the perfect shoe: a green product made with quality leathers for an accessible price. Not finding it in stores, in spring ’08 he debuted his own line of sport-inspired, casual and dress shoes, called Ryan Rowe, that he developed with partner Rowe Samieian out of Los Angeles.

Getting It Out There
Sometimes starting out is the hardest part. Difficult times have led cautious retailers to shy away from the new and exciting in favor of the recognizable and safe. Still, many independent retailers insist they’re on a constant search for fresh men’s footwear.

“I’m always open to bringing new brands into the store, especially in men’s, because men sometimes get the short end of the stick when it comes to being exposed to new brands and resources,” said Rick Lee, owner of Soula in Brooklyn, N.Y.

Added Hassan, “The market is very stale right now, and in my opinion, this is where good retailers can take advantage and separate themselves from the rest. It makes a big difference when consumers see a store with unique products.”

The trick may be getting retailers to see the shoes. For some, it’s as easy as a twist of the Rolodex. Rowe and Narrative Footwear both benefi ted from existing connections in the footwear industry. For others, such as Fin’s, a little luck can go a long way.

Finlay originally planned to sell her loafers on her Website. But after just two months in business, Bloomingdale’s came calling, and other large accounts such as Selfridges followed. And without Finlay’s prior knowledge, Sir Ian McKellen auctioned off a pair of his pink Fin’s in the London Guardian for charity.

Though creating buzz for Heutchy has been a bit more difficult, Stellberger has built a solid reputation. Not long after the first collection bowed, he was named one of Gen Art’s “Fresh Faces in Fashion,” an award for emerging talent that in the past has recognized Zac Posen, Phillip Lim and Hollywould.

In terms of finding retailers to carry the product, Stellberger said he will “stay true to what we want to do,” which has partly meant being very selective about where the collection is sold, mostly in small boutiques in New York and Los Angeles.

Looking outside the box can also help a new brand get some attention. Generic Man featured its shoes in a pop-up store inside Fred Segal Santa Monica last August and will have an even bigger one at Space 1520 in Hollywood, Calif., in June. The duo has also collaborated with retailers such as Steven Alan and Bettina in Greece for special limited-edition product.

But with triumph often comes trouble, and challenges abound for launches. Each brand that FN spoke to is independently financed, placing responsibility squarely on each leader’s shoulders.

At Fin’s, a major task was locating the appropriate manufacturer in Portugal. “Finding someone who believes in the product and is prepared to take a chance on you and give you an opportunity [is a challenge],” said Finlay. “So far, things have been delayed by a week or so, but never anything more than that.”

Generic Man, also made in Portugal, had similar problems. “Every factory wants the 50,000-pair order,” said Day. “Getting a lot of people to back you and [having them] want to grow with you are major challenges.”

Ringholz had to get accustomed to a smaller company, one where there are no Puma-sized budgets.

“When you are in a big company, you can afford to make five samples and see which ones [don’t make the grade],” Ringholz said. “When it’s your own dime, you can’t afford to throw things on the wall and see what sticks.”

Competition Is Key
Despite the challenges, a decided lack of competition in the men’s market can mean exciting prospects for startups with a clear vision.

“In men’s, there aren’t as many new lines as there are in women’s, so there is less competition, especially among the quality brands,” said Soula’s Lee. “In the $100-to-$250 retail price range, there isn’t a ton of variety for men.”

All the designers said they specifi cally chose the men’s arena for the opportunities it affords, especially as they are finding men to be more receptive than before when it comes to what they wear.

“Men are becoming more interested in fashion and how they look,” said Stellberger, a former designer at Marc by Marc Jacobs who continues to work full time in the fashion industry. “Because of that, I feel like it’s a great time to be doing something that caters to that.”

Though never easy, starting out in men’s shoes automatically means you have the potential to be a bigger fish in a smaller pond. It’s also easier to get attention in the beginning.

“People in the industry are really excited to see a new men’s brand,” said Finlay. “I don’t think you’d find a women’s designer getting a call from one of the biggest department stores in the world after only two months in business unless Madonna had been wearing your shoes every single day for the month.”

Even so, none have turned their backs completely on the much more lucrative women’s market, noting that they may expand their reach some time in the future. Generic Man already has plans to release Generic Man for Women, a line of six of its men’s styles on women’s lasts, for fall ’09.

“Women’s is definitely a bigger market, but there are a lot of people playing in that market too,” said Ringholz. “There’s probably greater potential in women’s [footwear], but it’s also probably harder to realize that potential. And from my experience, it’s diffi cult for a brand that establishes itself as a women’s brand to then [enter] into the men’s market, whereas vice versa it doesn’t seem to be an issue at all.”

Still, Emerson has no immediate plans to take over the world with Narrative Footwear. He does, however, want to make the brand as widely available as possible, targeting important markets such as Japan, China and the Middle East.

But each young brand said international expansion would be be slow and careful.

“We are definitely in this to be a well-established shoe company,” said Generic Man’s Day, “but we want to grow appropriately, at a good pace.”

Stellberger agreed, “It would be amazing if overnight it went from small to huge, but in the end, that would probably be the biggest detriment to us because we wouldn’t be able to handle that [on the production side].”

Time will tell if the men’s category really can outperform women’s in the long term. Right now, these designers are testing their business acumen, confident that their current situations will make them more competitive post-economic meltdown.

For more on these men’s footwear brands, click here.