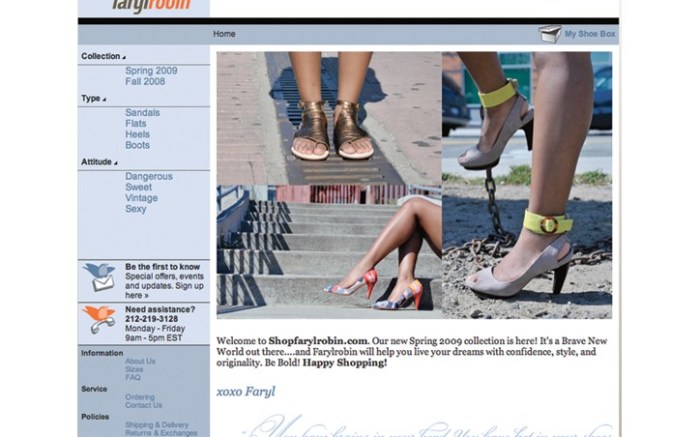 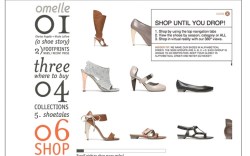 NEW YORK — Expanding into brick-and-mortar in today’s economy is a gamble for many footwear designers, but e-commerce is proving to be a profitable plan B.

“This is definitely a trend that has been quietly bubbling for a while,” said Guy Salter, deputy chairman of Walpole, a British luxury goods organization.

Even before the economic crisis, the expense and risks of traditional retail channels were making online boutiques all the more appealing, said Salter.

From a global perspective, e-commerce’s resilience to the recession — though it’s certainly not immune — is another strong point.

“Some retailers have seen that it has been the only channel for growth,” said Larry Joseloff, VP of content for retail forum Shop.org.

That was the key driver in designer Guillaume Hinfray’s decision to bow an online store, which is set to go live at the end of the month. “E-commerce is one of the few industries during this bad economic time that is making money and expanding,” Hinfray told Footwear News.

“Online retail was growing at a rate of about 20 percent per year. Now it’s down to 2 percent, but that’s better than the actual declines in brick-and-mortar,” he said.

Hinfray said he hopes the online store will boost brand awareness, because penetrating other retail channels has been a struggle.

“In this economy, emerging brands like me are the most damaged, as the big department stores prefer to buy only the best-selling brands or the most famous,” he said.

Coye Nokes, who launched her eponymous line for fall ’09, is hitting the same obstacles as she aims to break into high-end department stores and specialty shops.

“As a new designer, it’s important to open up as many channels as possible to get to the consumer,” said Nokes, whose Web boutique goes live this August. “As you would expect, retailers are being loyal to the brands they have, and a Web store enables us to get our product on a national level immediately.”

Designers, however, need to be careful of becoming overly available via the Internet, cautioned Salter.

“They need to make decisions about where they’re willing to fulfill orders and where they’re not,” he said. “[There are] issues with pricing and conversion rates for international orders,” he said. But, he added, the Web is also a quick resource to learn what sells in different regions.

To drive traffic from all corners of the world, footwear players are rolling out more Internet-only exclusives.

Hinfray will sell his new line of leather cuffs exclusively on his Web store, while Omelle designers Cherise Angelle and Nicole LaFave have launched their “bow bag” tote only on their online boutique, which went live in March. Though their debut collection has been picked up by notable retailers such as Debut in New York and Capitol in North Carolina, the duo said launching an e-commerce site was a key part of their business plan.

“We always considered an online store a competitive edge to the business, and it allows us to follow the growing trend of online shopping,” said Angelle.

Omelle regularly sends out e-mail updates about happenings with the brand, which has helped drive traffic to the site.

Like Hinfray, the Omelle designers also plan to use the site to launch new categories and are exploring the idea of selling knitted accessories, such as scarves, through the Web store next fall.

But LaFave cautioned that designers must be willing to put in the time to create a successful site. “We have all sorts of ideas, but we’re running it ourselves. It’s very challenging and very involved,” she said.

“It’s a tremendous amount of work, and you have to really be able to do a lot of different things well to make it successful,” agreed Jim Biolos, CFO at Farylrobin.

After launching a Web boutique in 2003, Farylrobin discontinued the site a year later to focus on retail relationships. But in November 2008, the company relaunched the online store as a customer service initiative, said Biolos.

“We [wanted] to be responsive to our customers [who were looking] for shoes that were hard to find through retailers,” he said. “An online store is a good vehicle to do that.”

The Farylrobin team runs the e-commerce business without an additional Web department and packs and ships all orders internally. “The site is not large enough yet to support its own staff, but we expect it will be by next fall,” he said. “The key piece is the fulfillment. When someone clicks ‘buy’ and purchases the item, you have to be set up so that they get their shoes quickly.”