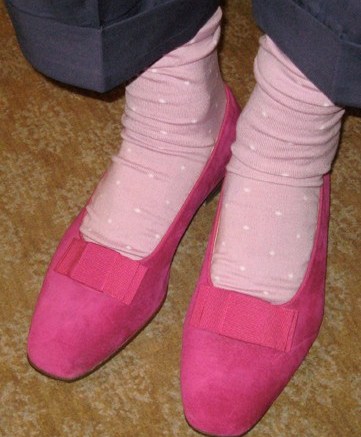 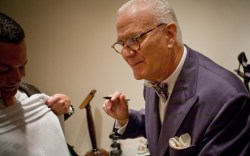 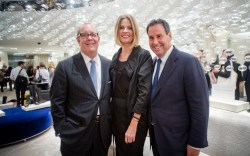 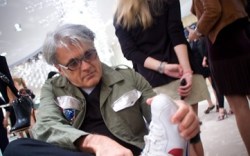 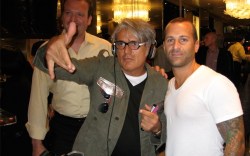 The came, they saw, they shopped. Vogue and the CFDA’s Fashion’s Night Out lured big crowds last night, especially in New York, where apparel and accessories traffic was up almost 50 percent versus a “normal” Thursday night. From Manhattan to Santa Monica, Calif., Insider made the retail rounds to find out how designers and merchants were spending their evening.

Insider caught up with Manolo Blahnik in three different places during Fashion’s Night Out: Bergdorf Goodman, Barneys and his boutique off Fifth Avenue. And though he was still smarting from breaking his tailbone in a recent fall, the famed designer didn’t let the pain stifle his awe of the evening’s turnout. “It’s extraordinary,” he exclaimed of the crowds at his boutique appearance, which included of mix of female fans, from their teens to their 80s. “Youngsters are excited. It’s great to encourage people and give them hope.”

But Blahnik didn’t save the best footwear styles for the ladies. On his own feet? Hot-pink loafers and blush-colored, polka-dot socks. “In real life, I like bright colors that clash with everything you wear!” As he navigated through crowds of fans on the Barneys shoe floor, Blahnik was eager to get the message out about fashion’s biggest night. “At the moment, we need to do everything we can to engage people to get into the shopping environment,” he said. “It doesn’t matter what it is, they just need to buy something.” After the trifecta of appearances, Blahnik said he was ready to have a Fashion Night In. “[After this], I’m going to bed. I want to go to bed right now!”

Click here to continue reading about the scene at Saks>>

Check out the kickoff in Queens>>

Check out the crowds in Downtown>>

Check out the parties in L.A.>>

At Saks Fifth Avenue, Insider found president and chief merchandising officer Ron Frasch riding the escalators up to the eighth floor, the now-legendary home of 10022-SHOE. Having just posed with Donna Karan at the opening of her new Saks shop-in-shop, Frasch had 10 minutes allotted to visit the floor and meet with designers before he needed to be back on the main floor for another photo op. Frasch might have preferred the more direct route on the elevators, but even for the president, there was no room — too many shoppers were already jammed in.

“We haven’t had this at this kind of activity at this time of night in a long time,” Frasch said. “It’s good to see the elevators this full — as long as [the people in them] have bags!” [For the record, lots of the “Want It Saks” bags were on display.] And while Frasch wasn’t counting his chickens too early — saying only tomorrow’s numbers would show if the added traffic had meant added sales — it wasn’t for a lack of trying. Samples, complimentary champagne and personal appearances by dozens of designers and celebs kept Frasch riding the escalators every 10 to 20 minutes until 11 p.m.

Meanwhile, designer Giuseppe Zanotti (in town, his reps told Insider, just for the day) kicked off his Fashion’s Night Out celebration on the Saks shoe floor, mingling with adoring shoppers and posing for pictures — and showing off his retro Nike running shoes. Sneakers at Saks? But the designer said mixing styles was all part of his new attitude. “Two or three years ago, I was very formal. But since the recession, I’ve wanted to feel more free,” he said. In fact, the designer told Insider he thinks everyone has benefited from a “more free” attitude about fashion since the economy went south — fewer uniforms, more creative dressing. “I wear these with denim and a jacket, like tonight, or with a tuxedo,” he said. Really, Giuseppe? A tuxedo? Well, the designer allowed, he did have one pair of more dressed-up John Lobbs, but only “for weddings.”

Saks wasn’t Zanotti’s only stop of the evening. Back at his own store, the designer-turned-DJ played upbeat sets while customers and guests mingled and enjoyed bellinis and Italian antipasti. Rihanna, Katy Perry, Rachel Bilson and Michelle Trachtenberg were among the designer’s devotees who stopped in.

Partying at Barneys and Bergdorf>>

Barneys fashion director Julie Gilhart, clad in vintage Christian Louboutin shoes and show-stopping leather pants, was thrilled to see so many people perusing Fashion’s Night Out — and she even got to partake in the festivities herself. “Proenza Schouler signed my wallet for me,” she gushed to Insider, showing off the inscription the designer duo wrote on the leather wallets they were autographing on the first floor.  Though she praised the event up and down, when asked about making Fashion’s Night Out a yearly event, Gilhart hesitated. “No comment on that. This night was a lot of work.”

When asked about the must-have fall shoe for women, Devi Kroell and the design duo of Proenza Schouler had conflicting opinions. “A carpet bootie from Proenza Schouler, of course,” said Lazaro Hernandez. “What else is there?” But Kroell was thinking more along the lines of, well, her own stuff. “The double-platform bootie with a snakeskin ankle strap,” said the designer, who was wearing the look. Kroell, who made several PA’s last night, is also busy gearing up for a store opening on Madison avenue next month. “I’m so excited, and this store will have everything: ready-to-wear, belts, shoes, bags, all of my collections.” And based on the success of Fashion’s Night Out, Kroell was extra supportive of rolling out the event every year. “That would be fantastic,” she said. “It was a huge production, and CFDA and Vogue did an amazing job. It’s a tough time in general for all of us, so it’s important to get people motivated.”

Alexander Wang was all smiles as he patiently took pictures with many of his adoring fans at Bergdorf Goodman, while a mob chased Anna Wintour, trying to get pictures of the editor-in-chief gone moviestar on their cell phones. Alexandre Birman was joined at the department store by Leighton Meester, who was donning a pair of Alexander’s platform gladiator sandals. The fashion-loving actress chose two pairs of the designer’s Brazilian-made collection for her personal collection. The two chatted briefly about Birman’s native Brazil, which Meester said she hopes to visit someday, before “Gossip Girl” fans practically trampled the Bergdorf-provided bodyguards to take pictures of the actress.

Meanwhile, outside Bergdorf, hundreds of people were left waiting, as the store hit capacity around 9 p.m., when the Olsen twins took over bartending at the eighth-floor BG restaurant.

Stopping in at the shops around Madison>>

Insider arrived at Jimmy Choo’s Madison Avenue boutique minutes after model Angela Lindvall finished her live photo shoot, styled by the brand’s founder and president, Tamara Mellon. “Fashion’s Night Out was such a great idea,” said Mellon, who mingled with Choo fans throughout the evening. The brand’s Project Pep initiative, being launched in conjunction with the Elton John AIDS Foundation, was also front and center during the evening’s festivities, and shoppers, including Cindy Crawford, posed with an oversized cutout of the number “72” to raise awareness for the cause. (People who have been exposed to the HIV virus have a maximum of 72 hours to receive the post-exposure prophylaxis (PEP) treatment for it to be effective.) And in November, the luxe brand is launching a capsule collection of footwear, handbags and small leather goods that incorporate iconic Jimmy Choo motifs, with 25 percent of sales from the collection going to Simelela Rape Centre in Cape Town, South Africa.

Kenneth Cole and rapper Matisyahu — who performed at the Rockefeller Center store — picked up the musician’s guitars for few photo ops. Could “rock star” be the designer’s newest ambition? “He doesn’t play the guitar — yet,” admitted Scott Currie, Kenneth Cole’s VP of global communications. “We’ll have to get on that.” And while Matisyahu doesn’t have plans to make a move into footwear, Insider learned that the Brooklyn, N.Y., native has been tapped to record a song for the upcoming Olympic Games in Vancouver.

At Nine West on Fifth Avenue, shoppers were lined up outside the store in advance of Third Eye Blind’s performance. Inside, the scene was just as frenetic, with many shoppers trying on and buying multiple pairs of shoes and employees shouting out raffle winners. The store, which was feting its new Vintage America collection, was decked out with Vintage America merch, and the drink du jour, apple-infused wine, fit nicely with the theme of the evening. Design chief Fred Allard and retail head Jay Friedman, who greeted customers as they arrived, said they were tracking the night’s sales and were pleased with the tally.

Ping-pong fanatic Stuart Weitzman spent much of the evening playing with his fans at his Columbus Circle and Madison Avenue stores. In between rounds, the designer stopped in at Bergdorf Goodman, where he greeted shoppers. After his last match at his crowded Madison Avenue boutique, Weitzman told Insider that the night was both fun — and lucrative. “It was our biggest sales day of the year,” he said. “It worked.” Weitzman’s next stop is Milan, where he will attend Micam next week.

The U.S. Open arrived at Cole Haan on Madison Avenue, as the retail store was decked out in a tennis-themed motif. An umpire guarded the door, and inside, treats from Dylan’s Candy Bar were placed around a giant tennis ball filled with lollipops. “I’m trying to be good and stay away from the Sweedish Fish,” joked Tracy Smith, president of global sales, “but I’m waiting for the Good & Plenty to come out!” Smith was encouraged by the number of shoppers who came out for the event, and was planning to hit all Cole Haan locations in the city. “We want shoppers to know it’s OK— it’s OK to come out and support the city and its retailers,” he said. “From our standpoint, we certainly hope they’ll think about doing this again.”

At Payless ShoeSource on Lexington Avenue, meanwhile, Christian Siriano steadily worked through a line of hundreds of fans and dished about the lineup of hot celebs coming to his Saturday runway show at Bryant Park. “I have 15 really amazing girls sitting front row,” he dished. “So exciting.”

Stacy London, star of TLC’s “What Not to Wear,” made the rounds at Ann Taylor’s Madison Avenue shop, offered her best styling tips for women browsing the brand’s newly revamped collection and vowed she’s still on track with her own footwear collection. “Soon,” she told Insider. “I promise!”

Model and photographer Daria Strokous showed off her exhibition of behind-the-scenes Fashion Week photography at the Fifth Avenue Salvatore Ferragamo store, where a DJ spun tunes and Vincent Ottomanelli, president and regional director of Salvatore Ferragamo USA, mingled with fashionistas.