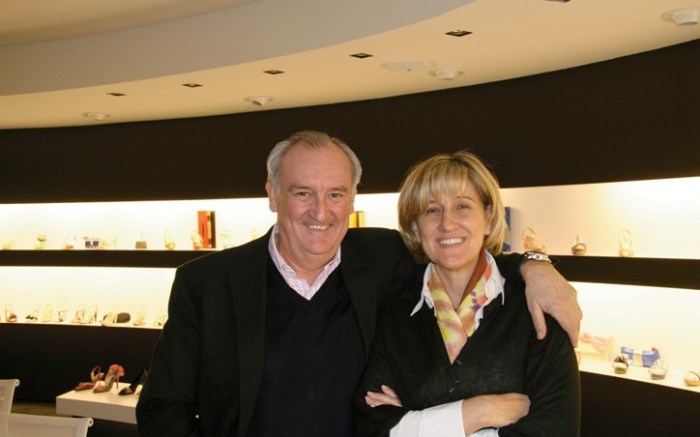 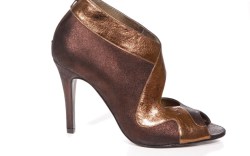 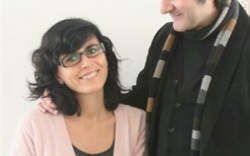 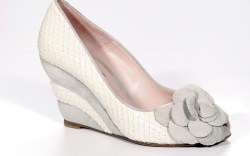 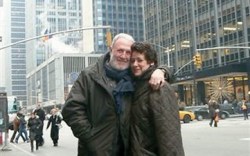 Background: Pepe Amat’s family has been making shoes in Elda, Spain, for 80 years. It makes product under its own label, Magrit, as well as for renowned fashion brands, including Carolina Herrera and Jil Sander. About 15 years ago, the Amat family shortened the original company name from Margarita to Magrit, removing any associations with the tequila cocktail or the flower. Amat’s wife, Reyes Amat, is a ceramist-turned-shoe-designer who now works alongside her husband in the family business.

Philosophy behind the line: The designers create with a “total freedom of thought,” said Pepe Amat, noting that influences such as the environment and their way of life also figure into the mix, resulting in luxurious shoes that make women feel like “objects of desire.”

What are the challenges of working together? “My responsibility is mainly managing the design team, as it is not only Reyes and me,” Amat said. “Another couple takes a big part of the collection on their shoulders.” And in addition, one of the couple’s sons, a graduate of PoliModa in Florence, joined the designers two years ago.

What are the perks? “In Spain, we say that four eyes can see more than two. The mutual support, the contrast between our ideas, it is really enriching.”

Are the designs influenced by the partnership? Reyes’ artistic background and “proactive character” have made her integral to the Magrit team, according to Amat. He added that while each has particular tasks, the two are united in their mission of creating statement-making looks.

Inspiration for fall ’09: “We feel mostly drawn to volume in shape,” Amat said. High platforms are key, and conversely, styles that give women a “rest from walking in sky-high heels all day.” Boots, including flat, motorbike and fur-covered variations “will have decisive importance.” Volume and color — a signature — also enliven the evening collection.

Background: Juan Carlos Garcia worked for a high-end Spanish footwear designer while studying for a foreign commerce and marketing degree in Madrid. He went on to develop a business venture with designer Tim Slack for U.K. chain ASDA, creating a shoe line in Spain, which snowballed into footwear collaborations with British retailers Jigsaw and Pied a Terre. Eventually, he struck out on his own. Meanwhile, Garcia’s wife, Pilar Sanchez, helped launch Uterqüe, an accessories concept from Zara parent Inditex Group, before joining Blueprint a year-and-a-half ago.

Philosophy behind the line: The couple finds inspiration in graphic design, architecture and apparel, but mostly their concepts come from within. “We just follow our instincts,” Garcia said. Each season, they introduce a special palette of colors and treatments, while aiming for continuity so their customers immediately recognize Blueprint’s designs.

What are the challenges of working together? “It is difficult being a couple and sharing a business. Your emotions have to be in the right place,” Garcia said, adding that it is sometimes tricky to “distinguish the professional life from the private, especially when you have two children.”

What are the perks? “Pilar is my wife, partner, companion. We share everything — we are collaborators,” Garcia said. “We have a long history. We need each other.”

Are the designs influenced by the partnership? “Pilar feels more secure [in her work]. I am more reflexive,” Garcia said. “But we have very similar points of view.” On the occasions when they disagree about concepts, if Sanchez is feeling more confident, Garcia said he usually is the one to bend.

Inspiration for fall ’09: The couple derives “good vibes” from designers including Chloé, Dior and Alexander McQueen, but ultimately, Garcia said, “inspiration is everything you live.” Key for fall are round toes, thick heels, booties and knee-high boots. Materials include snakeskin mixed with suede, lizard with metallics, cotton velvet and Italian baby calf.

Background: Paco Gil’s family has always been involved in the footwear industry. Gil started out in sales in the 1970s, but eventually was pulled toward design. “It was a slow but natural progression,” Gil said. He met his wife, Barbara Fusco, while doing business at the Nina showroom in Manhattan, where she headed up customer service and acted as a sales liaison. Friendship blossomed into transatlantic love, and Fusco eventually traded her native New York for the Mediterranean. “Our company policy was not to hire wives and girlfriends, but my partners and I made an exception,” recalled Gil. The couple has worked together for 20 years, though in separate capacities: Gil oversees design, while Fusco handles international sales and customer service.

Philosophy behind the line: “To create and not follow trends. And to offer a unique quality product at an accessible price point,” said Gil. “I design a wardrobe of shoes for a woman who is secure with her sense of style.”

What are the challenges of working together? “Spending too much time together, safeguarding our autonomy and giving each other breathing space,” said Gil. They do their utmost not to bring their work and problems home. “We make a big effort to park them at our doorstep each night.”

What are the perks? “Spending so much time together — it’s the flip side of the same coin,” Gil said.

Are the designs influenced by the partnership? “I do the designing, and Barbara sells. In fact, she has no imagination when it comes to design. But she knows what our clients want and has a sixth sense about what will be successful.”

Inspiration for fall ’09: Influences range from the Spanish countryside to the city streets. Gaucho-style boots in distressed materials are important. “Squared-off toes also will make a slow comeback, and black won’t just be a neutral but a fashion color,” Gil said.