Design That Redefines the Shopping Experience 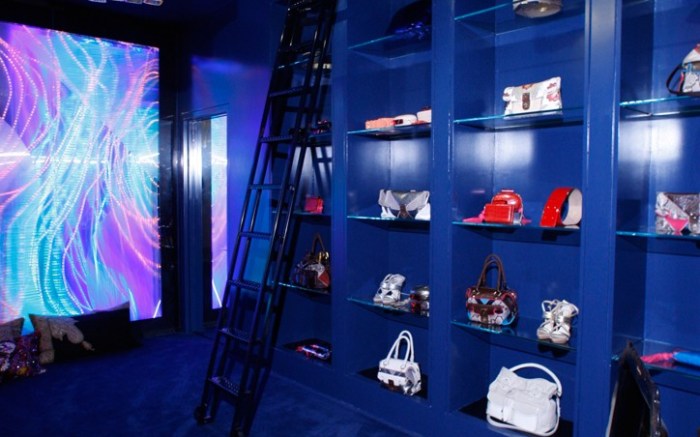 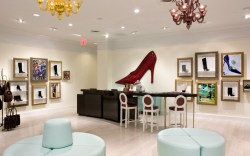 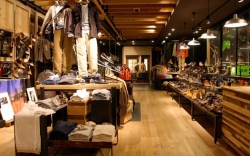 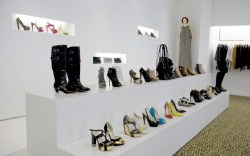 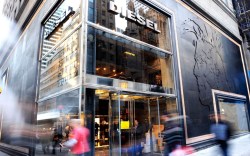 The recession may have curbed store expansion, but it hasn’t hindered creativity in retail design. Here, Footwear News looks at 10 shops opened within the past year that break new ground in sustainable building, innovative detailing and customer-friendly concepts, all in a bid to redefine the shopping experience.

The Vision: When Timberland bowed its store in the Soho area in February 2009, the goal was to incorporate as many eco-friendly practices as possible to reduce the store’s carbon footprint.

The Design: With U.K.-based Checkland Kindleysides and Montreal-based Loda Design behind the creation, the first priority was to leave the store’s foundation relatively untouched. Timberland kept the original brick walls and salvaged many materials from the previous occupants. It also restored the cast-iron storefront and put cast-iron legs on many of the interior tables. The floor and wood fixtures throughout the space are from 100 percent reclaimed wood, and all displays contain a recycled tag explaining the history and life of the materials. Even in the store’s construction phase, energy-efficient lighting was used, and all paint and sealants were free of volatile organic compounds, which are known to release harmful fumes.

The Vision: Based on the success of its flagship store, the London-based luxury retailer opened its first shoe-only offshoot in January. Serving as a haven for luxury shoe enthusiasts, the boutique has a quirky design aesthetic.

The Goods: The store stocks high-end brands for men and women, including Lanvin, Raf Simmons and Rupert Sanderson, among others.

The Design: The space features off-white walls to accentuate the pops of color sprinkled throughout the pink marble selling floor. Instead of traditional shelving, angled bookshelves showcase the shoes, which are illuminated by glass chandeliers from the 1970s. The charcoal-gray curtains lining the windows are an exclusive design by artist Kate Blee, and customers can lounge on bespoke and antique furniture selections, including reupholstered Chesterfield sofas, also from the 1970s.

The Vision: The Diesel team, led by Creative Director Wilbert Das, set out to construct a brand-centric concept store with every element reflecting the Diesel culture.

The Goods: The store stocks all Diesel and Diesel Black and Gold collections, including more than 700 different styles and washes of denim. The space also features footwear, bags, jewelry, intimates, sunglasses, fragrances and other small accessories.

The Design: After 14 months of construction, with more than 300 people working around the clock, the store bowed on Fifth Avenue and 54th Street in February, during New York Fashion Week. The design was conceptualized around four contrasting materials: refurbished vintage wood for the hand-carved flooring, black steel for the store’s exterior and interior display cases, cast glass on the doors and window frames, and bronze elements throughout. The stairwell, cash wrap and fixtures were handcrafted in Italy, and the exterior boasts a three-story-high carving of a Mohican (Diesel’s signature logo). The store also offers Wi-Fi, a DJ booth on every floor, cell-phone charging stations and tailoring services.

The Vision: The designer wanted a fluid and dynamic space with one-of-a-kind furnishings and whimsical accessory rooms.

The Goods: The store, opened in February, sells Williamson’s ready-to-wear, footwear and handbags.

The Design: Shoes and accessories are showcased in two separate areas. One room features footwear and bags in recessed shelving along a pink curved wall, directly across from the main shoe room, which designer Clare Ceprynski has dubbed the “sexy shoe library.” Painted midnight-blue, the room glows with an illuminated wall of tangled neon lights. The shoes are showcased in a library-like bookcase that spans the wall, and vintage furnishings provide seating. Most of the furniture throughout the 3,000-sq.-ft. store was gathered from antique markets and flea shops in Manhattan. Key pieces include the two massive Venini chandeliers purchased in Italy and assembled by hand. The gem of the store is the large indoor garden in the rear, a feature in all Williamson’s stores.

The Vision: Rock & Republic set out to create a glitzy fashion-meets-rock haven, where customers can shop or lounge.

The Goods: The store stocks the brand’s famed denim pieces, as well as suits for men, gowns for women, footwear, handbags and cosmetics. Since its May debut, the shop also has hosted a makeup artist and DJ on Thursday through Sunday.

The Design: Circular furnishings and fixtures were a key component for the design, said company President Andrea Bernholtz. The store also features many contrasting textures, from sleek leather seats to textured wallpaper and marble finishes. The store features blue accent lighting and 20 different monitors throughout, which constantly display clips from Rock & Republic fashion shows and other events. The most eye-catching of all is the store’s metallic tiled exterior, which locals are referring to as the “jewel of Robertson.”

The Vision: To communicate a new, more-democratic approach to the changing luxury category, Armani opted to place high-end items next to moderately priced items all in one inclusive space.

The Goods: All Armani products across the designer’s labels are available, and a restaurant sits on the top floor of the space, which bowed in February.

The Design: Doriana and Massimiliano Fuksas designed the four-story, glass-façade building, which covers approximately 30,000 square feet of retail, including the 5,200-sq.-ft. restaurant. The showpiece of the store is the massive geometrical staircase, crafted from plastic materials. Each floor is designed around curved surfaces and features beige walls, a black floor and ceiling and metal accents for a glossy look. The various lighting units throughout the store are developed to highlight the many curves of the space, including the arched display units, fixtures and furniture. Shoes are showcased on sleek, black shelving units, lit from the back by a wall of windows.

The Vision: Jones Apparel Group aimed to create a single space where all the company’s footwear brands could coexist in a light-hearted environment with quirky design accents.

The Goods: All the Jones footwear brands, excluding Easy Spirit, are featured in the store, along with select handbags.

The Design: The design of the boutique is intended to be engaging, a fantasyland with bursts of color and pop art touches, said VP of store design Susan McCoy. At the debut concept store, a 1,600-sq.-ft. space in Edison, N.J., that opened in October, antique frames on the walls act as shoe displays, while the store lighting is accented by intricate vintage ceiling chandeliers. The company will push the design even further with the upcoming flagship in New York, which will be designed as rooms in a house. A “kitchen” area will feature armoires filled with shoes that are showcased on dishes and cake plates, and the “attic” will display shoes among antique chests and dress forms, said Howard Ash, creative director at Howard Ash Inc., which is creating the space. The Shoe Woo color palette is diverse, from deep fuchsia and pink to canary-yellow and emerald-green. The New York flagship will also feature a stark white-on-white wall near the entrance with white props and molding and a large sculpted leg that will extend from the wall and don a giant, glamorous shoe.

The Vision: Tokyo-based architects Kazuyo Sejima and Ryue Nishizawa of SANAA aspired to create an exhibition-like space that uses a series of bubbles to showcase Derek Lam’s collection.

The Goods: The store, which bowed in May, features apparel, footwear and handbag collections.

The Design: According to the executive architect on the project, Toshihiro Oki, the design was a mixing of different architectural ideas with one main goal: divide one large room into smaller spaces without compromising the openness of the area. The designers opted to preserve many of the raw elements of the structure — a 19th-century manufacturing building — such as the original brick walls, which were painted white to enhance the gallery-like vibe. The concrete floor, accented by custom wood and aluminum furniture, is broken up by a series of clear acrylic walls creating different rooms. The fixtures and footwear shelving units are crafted from stainless, polished steel. The layout allows for the rooms to be rearranged each season.

The Vision: After 17 years in the city it calls its “second home,” Barneys New York doubled the size of its Chicago store in April to provide a more posh shopping experience for the consumer.

The Design: Fashion retail veterans Jeffrey Hutchison & Associates and Gensler Architects were brought on to expand the 52,000-sq.-ft. space to a 91,500-sq.-ft., six-story mecca featuring a restaurant, a 1,400-sq.-ft. personal shopping service area and more selling space for luxury merchandise. The second floor is home to the 3,500-sq.-ft. shoe salon, where items are displayed on acrylic shelving to give the illusion of floating merchandise. Also on the upper level, large steel ribbons designed by JHA double as sculptural fixtures for women’s apparel. The fourth and fifth floors, where most of the men’s merchandise is displayed, is highlighted with wood and teak floors and a palette of bronze, mahogany and white lacquered materials. The store is illuminated mostly by natural light via the floor-to-ceiling windows, and customers can enjoy the views of Lake Michigan on the terraces accessible by the fifth and sixth floors, or in the in-store restaurant, Fred’s. A sweeping staircase with limestone steps adorned in glass and blackened steel connects the second to fifth floors and leads to a decorative canopy on the fifth floor.

The Vision: When the opportunity presented itself for chic boutiques Madison and Diavolina to come together under one roof in April, owner Mark Goldstein decided to create two very separate luxury retail worlds united through a walkway between the two shops.

The Goods: The stores both stock luxury apparel and accessories and feature an assortment of shoes from Pour La Victoire, YSL, Chloé, Velvet Angels and Marc Jacobs, among others.

The Design: Los Angeles-based Standard architecture firm designed the project and decided to keep the outside of the building on West Third Street clean and uniform, with a bone-colored façade and bold block letters for signage. The Madison side of the space has an elegant, industrial vibe, with a raw wood ceiling among rows of lighting and dark-gray concrete floors that contrast a large Serge Mouille lighting fixture and modern chairs by Marc Newson. The personality of Diavolina is quite the opposite, featuring a more glamorous and playful décor of leopard-print carpeting, red-and-gold coloring, and bold, white tiered shelving and recessed shelving units in the walls for shoes.