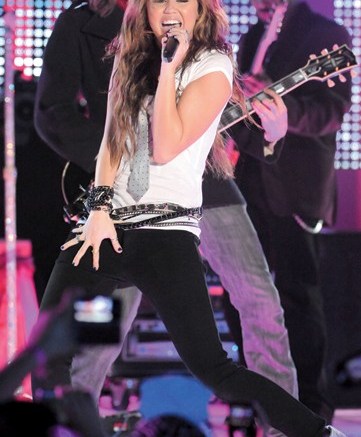 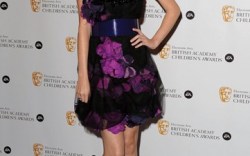 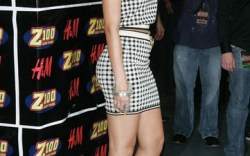 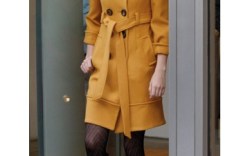 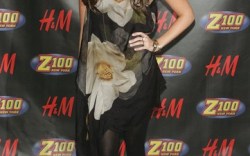 In a global recession, teens’ desire to emulate their celebrity idols is proving to be a bright for the footwear business.

Stars such as the Jonas Brothers, Demi Lovato, Brown, Miley Cyrus and Taylor Swift are increasingly driving footwear and fashion trends, generating buzz and building sales for many for example, 2008’s Disney TV movie “Camp Rock.” In the film, rising actress and singer Demi character, Mitchie, paired several outfits with Minnetonka Moccasin Co.’s fringe boots. Within days of the movie’s debut, Yahoo forums teen Websites such as J-14.com were full of comments about her on-screen look. And at Minnetonka immediately felt the impact.

“We definitely saw a spike in sales of this style as a result of the ‘Camp Rock’ phenomenon,” said Minnetonka President Scott Sessa. “We had customers referring to these boots as the ‘Camp Rock boots’ rather than by our style name and number. Our retailers who cater to the tween and teen audience couldn’t get enough of these boots.”

Lovato also drove her footwear-obsessed fans to do a little good in December for the sixth annual Ugg Art + Sole online auction, benefiting St. Jude’s Children’s Research Hospital. The online fundraiser featured several pairs of boots designed by A-list celebrities, including Jessica Simpson, Sharon Stone, Matthew McConaughey, Jennifer Garner and Brooke Shields. It was the teen guest designers, however, whose boots garnered the most attention and ultimately the highest bids.

“It is no secret that teenagers idolize stars in [terms of] what they do and what they wear,” said a spokesperson for Ugg Australia. “Awareness is key in raising money for our partner charity, St. Jude’s Children’s Research Hospital. Teen stars who have a large fan base, fan sites and mass appeal are great additions to the auction.”

Thanks, in part, to her MySpace music page, which has logged more than 22 million hits to date, Lovato nabbed the most bids during the auction, and the boots she designed sold for a whopping $7,518.

Owner Tony Benattar was flooded with inquiries about the custom Love and Peace boots he made for 19-year-old country music star Taylor Swift, who wore them on tour for her chart-topping album, “Fearless.”

“It’s always a blast when you see a celebrity wearing your boots,” said Benattar, whose fans include Madonna, Aerosmith’s Steven Tyler and Hilary Duff. “And Taylor is a fashion icon for her generation.”

“When Taylor Swift wore the light-blue leather [Liberty] boots, we had people come into the store asking for them or calling about the boots,” said retailer Heath Calhoun of Cowboy Cool in Dallas, which stocks several styles from Liberty Boot. Even Calhoun’s 8-year-old daughter — a diehard Taylor Swift fan — begged her dad for a pair of the boots. “Whatever [the teen stars are] wearing, from the shoes to the shirt to the dress, that’s what the kids want.”

Toy manufacturer Jakks Pacific is also making a Taylor Swift doll, which will include a pair of mini Liberty Boots. “They asked my permission to do the boots and I said, ‘Absolutely,’” said Benattar.

Liberty also was flooded with calls and e-mails when “American Idol” contestants David Cook and Bo Bice donned their boots on the show.

“It very much comes down to the music. These girls are so enveloped in the music world, and they really relate to these bands,” she said. “They’re trying to figure out who they are, and they [want to wear] what they see on their music and TV idols.”

Todd Kirssin, DMM at DTLR, agreed, that its is music, as opposed to sports, that is the main driver for trends. “Maybe 10 years ago, it was the athletes who were really driving trends. It was about whatever the basketball players were wearing on the court,” said Kirssin. “But the migration for a long time now has moved toward the hip-hop entertainers and celebrities.

Sportie LA Co-owner Isack Fadlon said that it all comes down to visibility, and the stars garnering the most headlines have the greatest impact on trends, especially in candid moments.

“When they’re wearing a product because they like it, not because of an endorsement deal, then it really transcends at retail,” Fadlon said.

Still, the ability of idols to influence fashion isn’t exactly new. And Monique Umeh, accessories editor with style and forecasting firm Stylesight, said some of the trends are driving themselves, as opposed to a particular star defining a look.

For example, Umeh said Chris Brown’s fashion choices are clearly influenced by Usher, who drove trends eight years ago. And she noted that Lovato and her Minnetonka boots is a look that first made fashion pages three years ago on Nicole Richie. Meanwhile, the Jonas Brothers are tapping into the reemergence of the new wave look of the 1980s and the Talking Heads. “What is happening is that [the current crop of teen stars] are building on the foundation of their predecessors,” she said.

In that same respect, Fraser Ross, owner of Los Angeles-based Kitson boutiques, said that the originators of those looks still hold a great deal of sway. “It’s not just teens that generate what teens buy,” he said. “The girls in their 20s, such as Nicole Richie, and the on-screen wardrobe choices of the 90210 cast are also infl uencing purchases.”

Regardless of who is the influencer, Umeh said footwear and accessories currently have the edge over apparel, as teens look to mimic the style of their favorite stars.

“There is a segment of the teen demographic whose designer purchases are more accessories driven,” she said. “Louis Vuitton, Marc Jacobs — those are attainable designer accessories that teens could probably afford if they really wanted to shell out [the money],” said Umeh. In a recession, teens who can’t spend on a specific item will do the research to find a more  affordable alternative. “What’s important are stores such as Steve Madden and Guess. They get the trend at the right time and for the right price.”

Celebrity stylist Gina LaMorte agreed. “Shoes give [these consumers] options. In general, they’re not expensive, and they’re a quick way to emulate someone’s style without spending a lot of money.”

Hill, however, said many fashion-savvy teens still crave high-ticket brands, fueled by blogs and fashion Websites that showcase the labels and the stars who wear them. “Some extremely savvy 16-year-olds, who might have a mom working in fashion, know what Balenciaga is, and that’s what they want,” she said.

Indeed, the bloggers may be just as influential as the celebrities they write about, introducing teens to new labels and designers.

“As teens are watching these awards shows, they’re blogging about the fashion as it’s going on,” said Hill.

The aftereffect is a huge plus for retailers, as blogs often lead teens directly to a retailer’s Website.

On the Yahoo Answers forum, where consumers were blogging about the Minnetonka boots worn by Lovato, several posts by other “Camp Rock” fans provided links to retailers such as Urban Outfi tters, where the kicks are sold.

A search for “Ashley Tisdale shoes” (Tisdale once appeared in an ad campaign for Ecko Red footwear) resulted in “related search” links to sites for Journeys, Finish Line and Famous Footwear, all of which carry the Skechers line.

The Ecko Red Phranz-Phahrenheit style that “High School Musical” star Vanessa Hudgens wore in her music video for the song “Sneakernight” also caused a fashion frenzy. The video, which has gotten nearly 20 million hits on YouTube, drove fans to the blogs to inquire about where to buy the sneaker style.

Skateboarding brand Etnies also has seen sales success, thanks to the popularity of skateboard star Ryan Sheckler, who after years of wearing Etnies, now has his own shoe with the label.

“Ryan Sheckler started skating for Etnies when he was 7 years old, and from a very early age, he began winning pro skateboard contests and many kids looked up to him,” said Don Brown, SVP of marketing for parent company Sole Technology. “Ryan Sheckler has definitely driven brand awareness and sales for Etnies among today’s youth, who look up to him. As Ryan’s visibility grew, so did the awareness of his Etnies shoes. We saw an increase in demand for Ryan Sheckler’s pro model shoes during the fi rst season of his TV show ‘Life of Ryan’ on MTV.” Sheckler’s second pro model shoe with the brand is hitting retail for fall ’09.

With new teen stars inspiring new looks each season, many retailers and brands are hopeful that teen consumers can offer a much-needed boost during difficult economic times.

“They want to keep up with their idols and their peer groups, which is why they’re the biggest consumer to go after right now. I tell my associates, ‘When you get a bunch of teen girls in the store, treat them like the Queen of England, because they have money to burn,’” said Ross with a laugh.

“There’s no question about the spending power of teens today,” Sessa added. “They are very media-savvy, and they are influenced by what they see in magazines, on the Web, in video games and on blogs. They are very fashion-aware, so if they like a look, it will sell in big volume.”