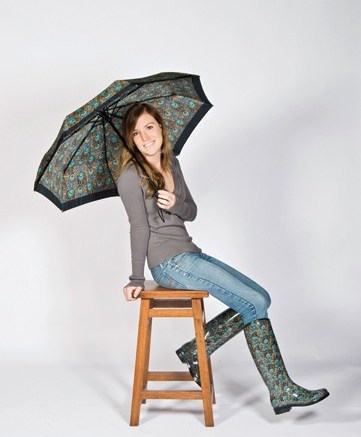 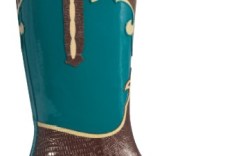 Rainboots are getting top billing in today’s performance-comfort category. While plenty of options are available — from inexpensive generic versions to pricey designer looks — Dav has added its whimsical take on the category.

The brand was launched last September by husband and wife Dave and Kerri Sengstaken, owners of Oxnard, Calif.-based StyleWest, a marketing, sales and distribution firm. Dave Sengstaken, president, said the two had always wanted a brand of their own, and rainboots seemed like the perfect opportunity. “We saw a hole in the market for high-fashion, wet-weather looks,” he said. “We traveled to New York a lot and would see people wearing loose-fitting, lug-sole rainboots.”

The couple’s goal was to create a collection that focused on feminine, form-fitting heeled boots and even pump and sneaker silhouettes. Versatility was also important. According to Sengstaken, Dav’s styles are meant to be worn beyond rainy days. “Even when there are just a few clouds in the sky, women wear them,” he said.

While fashion-forward looks are the main focus for Dav, the brand does not ignore classic silhouettes, such as Western and English riding styles. In fact, the line kicked off with cowboy looks, inspired by the Sengstaken’s own ranch in Ojai, Calif.

In keeping with a comfort theme, all Dav’s boots feature footbeds made of a breathable recycled material with Poron inserts at the forepart and heel. “We’re constantly updating the Poron inserts,” Sengstaken said, noting that the component technology is promoted on hang tags. “Once customers wear the boots, they feel the difference.”

Also distinguishing the collection are novel prints, created by StyleWest’s in-house team of graphic designers. Among the offerings are houndstooth check, paisley, argyle, animal-print and roses.

To remain competitive, Dav retails for less than $85. “We want to be attainable,” Sengstaken said, “so we’re staying away from designer prices.” The line is stocked by more than 600 accounts nationwide, ranging from boutiques to shoe stores to equestrian shops.

Dav’s retailers said the brand is a strong addition to the rainboot scene. Donna West, buyer for the two-store chain Londo Mondo in Chicago, said the boots were a top seller this past winter. “We had lots of wet, heavy snow in Chicago, and we were selling them instead of snow boots,” she said, adding that the boots’ warm linings were well suited to the winter months.

At The Velvet Slipper in Lahaska, Pa., the brand’s English riding styles in solid colors have been popular among more mature consumers, according to sales associate Lee Deluca. “It’s the 40- to 60-year-old woman buying them,” Deluca said, noting that Hunter, which the store also carries, appeals to girls and young mothers. “[The Dav customer] wants to be more fashion-forward and is not afraid to step out because of the [affordable] price points.”

While Dav is gaining ground in the category, it still has considerable competition. U.K. brand Hunter in particular has a huge following, Sengstaken said. But, he noted, “Hunter’s a different customer. Consumers enjoy their boots, but we believe ours are more fashion-forward, and our comfort gives us an edge.”

When it comes to the wave of designer labels that have come into the category, including Kate Spade and Michael Kors, Kerri Sengstaken, marketing director, pointed out that rainboots are just an item for them. “There’s not a lot of research or design behind their boots,” she said. “Details like footbeds and breathability are not factored in.”

To acquaint more consumers with the brand, the Sengstakens are using grassroots marketing. Recent initiatives included participating in the 2009 Grammy Awards gift lounge. “It rained all four days, which turned out to be great for us,” recalled Dave Sengstaken. “Other vendors asked for our boots to wear.” In April, Dav appeared in the backstage gift lounge at Bravo TV’s second annual A-List Awards.

Looking ahead, the Sengstakens are focused on growing the product range. They have already added coordinating accessories, such as umbrellas, bags and socks, which account for 25 percent of sales. For fall ’09, kids’ rainboots will be introduced, priced at $27 to $45, along with pint-size umbrellas. A men’s collection also is in the works. In addition, Dav has licensed the Barbie name for a limited-edition collection of high-end looks for women and young girls. Launching for spring ’10, the offering will include boots, umbrellas and water-resistant bags, and will be available at retailers such as Fred Segal Santa Monica’s Barbie boutique.

Based on Dav’s success in the U.S., the Sengstakens also are seeking to expand internationally. The brand broke into the Canadian market earlier this year and is in the process of lining up distributors in Europe and Asia.

“People like Dav’s uniqueness,” said Dave Sengstaken. “In this retail climate, you need something new and exciting.”