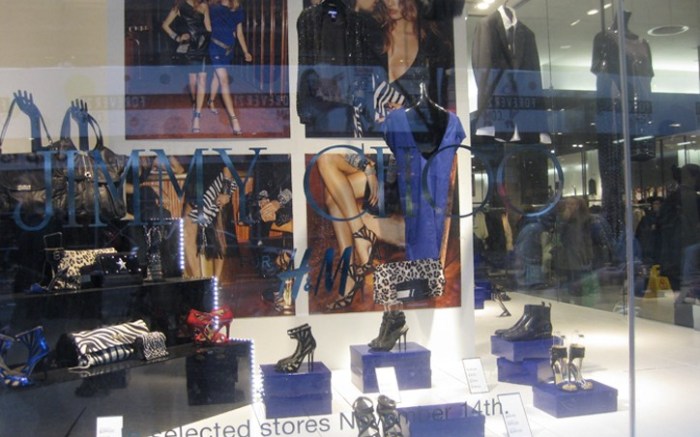 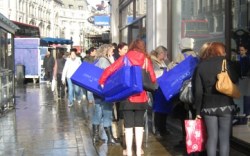 On Saturday, Nov. 14, H&M launched the highly anticipated Jimmy Choo by H&M collection of shoes, apparel and accessories at select stores around the world, and Footwear News was on hand to take in the enthusiasm and, in some cases, chaos that surrounded the retailer’s most highly publicized designer collaboration to date.

[Check out the scene in Los Angeles and London.]

For his part, Choo CEO Joshua Schulman said the H&M experiment was a terrific success. “We were so delighted with the phenomenal consumer response to the Jimmy Choo for H&M flash collection,” he said. “I heard stories of women camping out in sleeping bags in London, Paris, Tokyo and Hong Kong. The project accomplished exactly what we set out to do: expose our brand to a younger audience for a moment in time and capture the hearts of women around the world. This was a fun exercise, which shows how many people are yearning to be part of the Jimmy Choo world.”

NEW YORK: Around 1 p.m., at the H&M location on the corner of 34th Street and 8th Avenue, more than two-dozen female shoppers, most of them in their 20s and 30s, were lined up outside the sectioned-off shoe area. An H&M staffer said that a line of more than 100 people started forming outside the store at 9 p.m. the night before. He wasn’t sure whether the Choo shoes would sell out that day, but said supplies were definitely dwindling and the launch had been as strongly received as H&M’s previous designer collaborations. Shoppers had a limit of 10 minutes to peruse the special shoe area and were only allowed to buy one pair of each style.

Hannah, a twentysomething New Yorker, said she came with a friend to check out the scene on Saturday, even though she had already snagged three pairs during a special preview at the Fifth Avenue location the night before. “They’re all so cute,” she said of the sandals, heels and over-the-knee boots, before snatching up another pair.

Down the street, at the Herald Square H&M, about 75 shoppers were lined up on the second floor, waiting to enter the shoe area. Two sisters, Nina and Tina — both in their twenties — left the store with almost 20 pairs between them, after lining up at 6 a.m. They were pleased with how smoothly the morning went, but were not crazy about the prices. “It’s cheap relative to [Choo’s retail], but still expensive relative to H&M,” said Tina. “But we got a lot of leather, so you know you’re getting some quality.”

Another shopper, Kaylee, boarded a bus from Washington, D.C., at 5:30 a.m., to arrive in the city an hour later. There were close to 400 people in line by the 10 a.m. opening, some who had shown up as early as 10 p.m. the night before. Kaylee, also in her twenties, did her online research two months prior to the launch, to optimize the short, 10-minute shopping limit. When she arrived, she already had a pair of boots and heels in mind. “All the merchandise is really, really nice,” she said. “For most people, it’s the first opportunity to get an affordable [Choo] shoe.” There were just a few pairs left on the floor around 1:30 p.m., and staffers said the stock was expected to sell out soon. “We aren’t replenishing. This is it,” said one saleswoman.

LOS ANGELES: By 11:30 a.m., the H&M store at the Beverly Center was swarming with consumers snapping up Choo shoes and apparel. Store personnel tried to keep the peace by yelling out instructions through a bull horn, but that didn’t stop some overly eager customers from stripping down in store aisles to try on clothing to avoid the long wait times for dressing rooms.

Hours earlier, the store had already stopped handing out wrist brands at a staging area on the street below, which allowed access to the special roped-off shoe area. However, dozens of consumers sans wristbands sat in a waiting area, who were told they could shop the shoes after all wristband holders had their chance to make their purchases. But it was unlikely there would be much left at the end of the day.

FN caught up with Jamie, 22, who was among the first allowed into the store after arriving at 10 p.m. on Friday night, as she left the store with two friends, who helped carry out her haul of six pairs of shoes, five handbags, shirts, jackets and various accessory items. “I pretty much got one of everything,” she said, though she balked at revealing the final tally of her shopping spree. “I do have two other pairs of Jimmy Choos, but this is different. It’s limited-edition. It’s such a fun experience.”

But twentysomething Gloria summed up what probably was the motivating factor for many who endured the long wait times and lines. “I love all shoes, and this is Jimmy Choo,” she said. “I don’t think I’ll ever be able to afford real ones, so this may be the closest I ever get.”

That said, not everyone was so enamored with the claustrophobia-inducing organization of the event. Two men in their 30s walked into the shopping melee and promptly reversed course. “No way,” one said to the other. “That’s swine flu heaven.”

Still, some of the Choo faithful did make the pilgrimage, including Lee, a 24-year-old sales account manager. Lee traveled 60 miles from Berkshire and arrived at 5:45 a.m., joining others who had camped out overnight. After he caught his girlfriend ogling items online, he decided to make the trip. “My girlfriend had chosen what she wanted online, but I’ve bought some additional surprises for her that she wasn’t expecting,” he said.

Lesley, 36, and Alan, 30, walked out of the store with a handbag, a wallet and some women’s clothes for a friend. But overall, they were underwhelmed by the selection.

“It’s the first time I’ve bought Jimmy Choo and I think the quality of the bag looks good, but the clothes aren’t really me,” Lesley said.