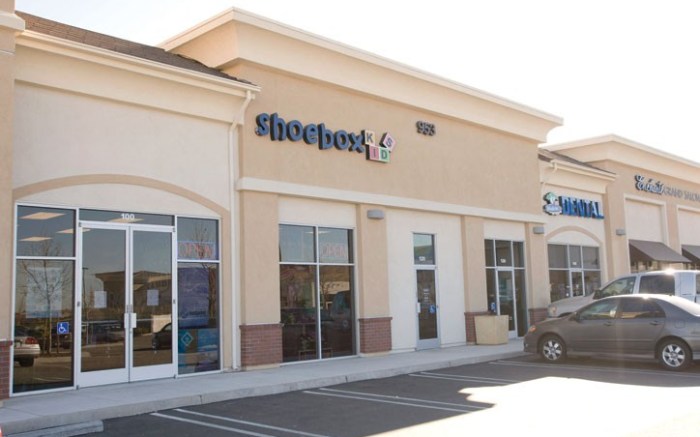 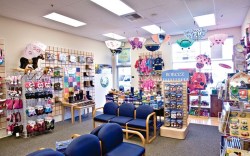 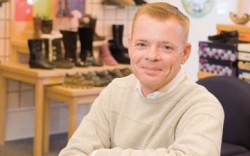 OUT OF THE BOX

Shoebox Kids began life as a Stride Rite store. Owner John Dykes, a 20-year veteran of the children’s footwear industry, worked at the Roseville, Calif., shop for five years before purchasing it in 2006.

When Dykes took over the store, Stride Rite informed him it planned to open a mall location in the Roseville area. Dykes responded by moving his store to a more competitive location, adding new brands and rechristening the shop Shoebox Kids. But he maintained his status as an authorized Stride Rite dealer. “I didn’t want to be stuck with just one brand, and I didn’t want to go head-to-head with Stride Rite,” he said. (Stride Rite’s new store opened in November just a few miles from Shoebox Kids.)

Dykes has since expanded his business with two additional locations, one in nearby Citrus Heights, and one in Richmond, across the Bay from San Francisco. The stores range in size from 1,000 to 1,300 square feet.

Shoebox Kids stocks more than 50 brands, ranging from basics to fashion labels. Styles from Ugg, Lelli Kelly, Vans and Geox are top performers, but smaller brands such as Tsukihoshi, Morgan & Milo and Graffeeti also are gaining a following.

But given the economy, Dykes is feeling cautious. He said he’ll likely scale back on the number of brands and styles he stocks this year. He also plans to buy deeper into lower price points and focus on basics until the economy begins to recover. “It’s a fine line,” he admitted. “I don’t want to be so basic and boring — there are too many stores out there like that. I want [my assortment] to pop. But certain vendors can offer pop without getting too expensive, such as Nina, Kenneth Cole and Jumping Jacks.”

Dykes helms the Roseville location, and his managers oversee the other two stores. He said he prefers to focus his efforts on one shop, rather than traveling among the three locations, believing the stores benefit from the consistency. “It comes down to relationships that you build, one by one, day after day,” he said. “Remembering people, their faces, what’s going on in their lives makes customers loyal.”

Dykes also builds relationships within the community by collecting shoe boxes for area teachers who use them for school projects. And he donates gift certificates to silent auctions at local schools. “A $50 gift certificate doesn’t cost me that much money,” he said. “But those are the little things that go a long way in making you look good.”

Dykes spent about $30,000 building out his Roseville flagship in 2006, with the landlord (Dykes rents the space) kicking in about $12,000. The result is a clean modern interior, with maple wood flooring and fixtures. Versatile navy seating units are scattered throughout the colorful space, and the focal point is the castle-inspired kids’ play area.

However, remodeling is an expensive endeavor, so Dykes isn’t eager to tackle his other locations just yet. “The other two stores are a little bit more dated and are going to need a boost of newness, depending on how the money comes in,” he said. “But if I can make the stores look nice and clean and not spend a lot of money, I would rather focus on opening one more location.”

Dykes describes his advertising budget as “fluid,” and his strategy is similarly experimental, including TV and print spots, direct-mail pieces, and e-mail blasts. He has even looked into billboards, but ultimately deemed them too expensive.

After investing in a TV campaign that was only moderately successful, Dykes said he has zeroed in on direct mail and e-mail as the most effective means of marketing his stores. He also operates an e-commerce site that generates good traffic.

Anxious to expand Shoebox Kids’ footprint in Northern California, Dykes said a fourth store is on his mind. Business is good: Sales were up by nearly 15 percent last year. Still, Dykes admitted it’s a tough time to think about growing the business, with increasingly grim reports about the economy and retail sales. “We are having increases that I never would have thought possible,” he said. “But this is a recession. We don’t know what’s going to happen next, so there’s some trepidation.” For now, he said he’s taking a wait-and-see approach.

Part of what sets Shoebox Kids apart from the competition is its support of up-and-coming brands. Matt Butlett, U.S. sales manager for Tsukihoshi, said Dykes takes the time to develop new brands, creating an appealing presentation and marketing strategy and serving as a de facto cheerleader.

In addition to being an early proponent of Tsukihoshi, Dykes also was the first to carry Graffeeti, a line that can now be found at Kitson Kids, Tip Top Shoes and Neimanmarcus.com. “It’s our first venture into the footwear business, so my business partner and I are learning the ropes, and John [Dykes] has been a bit of a mentor to us,” said Kelye McKinney, co-founder of Graffeeti. “We share with him some of our upcoming designs and pricing strategies and get ideas from him.”

Neighborhood vibe: Just north of Sacramento, Roseville has been ranked one of the top 100 places to live in the U.S. by Money magazine. It’s also a popular regional shopping destination, with the 11th-highest retail sales in the state.

Customer base: A mix of professional and stay-at-home moms, all with plenty of disposable income.