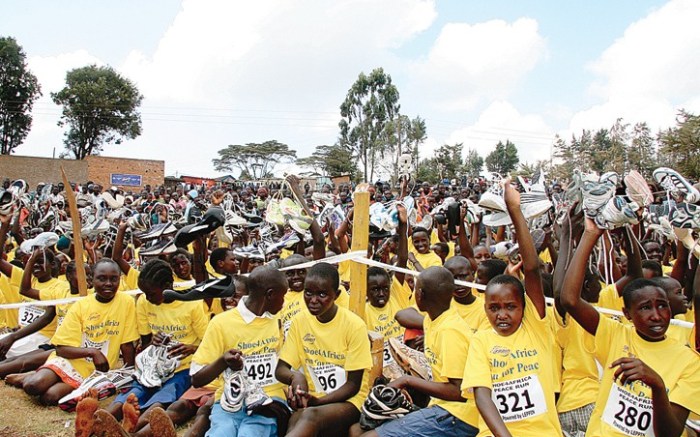 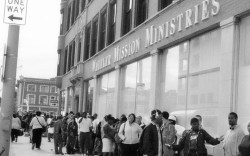 NEW YORK — Toby Tanser, once an elite marathon runner, spent most of last year giving away shoes in Kibera, Kenya, the largest slum in Africa.

Not far from downtown Nairobi, the wasteland is burdened by raw sewage, contaminated drinking water, the AIDS virus and reminders of bloody tribal battles that flared up following the 2007 elections.

But Tanser, who founded the Shoe4Africa nonprofit, isn’t worried about all the dangers. In fact, he says, Kibera and other areas in Kenya, such as Iten, need his services more than ever. What troubles him most, though, is the challenges he now faces in trying to raise money.

Formerly a sponsored athlete, Tanser has plenty of connections in the footwear industry to garner free shoes — he is friends with the coordinators of the London and Los Angeles marathons, is a board member for the New York Road Runners and keeps in touch with several big athletic companies. In 2008, he gave away 25,000 pairs of slightly used shoes.

But Tanser’s Shoe4Africa operation, which he started in 1995, is largely a one-man show. He uses personal savings to pay for shipping and storing the donated sneakers. That’s become costlier as postage rates have continued to rise. Tanser also spends $10,000 to $40,000 to sponsor local races in Africa that empower women and encourages participants and spectators to get tested for HIV.

“This is my full-time job, but I am getting poorer and poorer by the moment,” said Tanser, who aims to raise $15 million to build a hospital in the city of Eldoret later this year. “Money would be great. It’s very difficult to fundraise at the moment, and asking people for money to pay for shipping shoes isn’t a priority for most people right now.”

Certainly, there couldn’t be a more challenging time to seek financial contributions.

Many philanthropic groups — from nonprofits to churches to universities — are suffering from steep drops in income this year. Some observers estimate that donations across all charities could fall by as much as 20 percent to 30 percent in 2009.

It’s no surprise people and corporations have cut back on their philanthropic giving. The wildly swinging stock market and concerns about job security have made individuals and companies more focused on shoring up their own finances.

But at the same time, many charities are experiencing increased demands from people asking for help. So with dwindling donation dollars, how are they keeping their messages — and dire needs — in the public spotlight?

Wayne Elsey, founder of Nashville-based Soles4Souls, said that in good economic times and bad, those groups that stick to carefully developed marketing plans will fare best.

“I don’t care what the economy is doing, we’re going to follow niche marketing strategies that work,” said Elsey.

To that end, Soles4Souls recently branched out with a host of grassroots initiatives. The nonprofit organization on June 1 kicked off its second-annual Barefoot Week, which collected and distributed throughout the week about 50,000 pairs of shoes to homeless people in five U.S. cities, and also challenged corporate executives to spend an entire workday without footwear.

In addition, Elsey teamed up with Indianapolis-based athletic retailer Finish Line to offer customers a $5 discount toward a new pair of shoes for every gently worn pair they donate. Finish Line will also contribute $1 for each pair given to Soles4Souls, up to $100,000.

What’s more, Elsey also partnered with Nine West for the launch of the brand’s Vintage America Collection, which hits in July. In its first such arrangement, Soles4Souls’ logo will appear on all related shoeboxes, as well as on print and Web marketing materials. And the two will work together to elevate the cause’s profile.

Elsey has also boosted the organization’s presence through social media. For instance, on Twitter alone, more than 8,000 people follow his daily posts about Soles4Souls’ activities and ways they can get involved.

“Things are very viral today,” he said. “You can spread your message a lot quicker that way than through traditional print.”

So far, the ramped up outreach is working. According to Elsey, Soles4Souls has experienced a 90 percent rise in pairs donated this year. Although in a limited number of cases, he said, the slower economy has led wholesalers to donate more unsold product.

“We’re going to continue to do grassroots events with a retail-driven brand strategy,” he said. “We don’t do so-called awareness events. Those cost money. We need to engage people through participation events. We want people to do something about it.”

Likewise, the Two Ten Footwear Foundation is making an aggressive push to boost its message — and raise funds in the process.

According to President Peggy Kim Meill, the group is doubling the number of phone calls, e-mail and face-to-face pleas for donations.

She said the organization will be down roughly 10 percent from the $2 million it raised last year.

“Even though gifts may fall, especially on the corporate front, we keep our relationships open. That part won’t change,” Meill said. “We will continue to serve our people.”

Since last fall, Two Ten has seen a steady rise in the number of footwear personnel asking for assistance.

In addition to offering monetary aid, Two Ten has stepped up its professional services. In May, it launched a revamped, free, career Website, 210careers.org, which enables job seekers to create profiles and post resumes, and allows corporations to post open positions and search for talent.

So far, 200 individuals and companies have signed up to use it.

Additionally, Two Ten has also opened its Waltham, Mass., headquarters for groups of unemployed people to meet regularly. Meill said that each week five to 10 individuals from the industry convene there to share ideas and tips for finding jobs. It also helped to facilitate meetings among human resources professionals, where they discuss topics of mutual interest, such as recruiting and retention practices, and how human resources divisions in general are navigating the economic downturn.

“Things might be tough for our organizations now, but it’s a lot tougher for the individuals and their families in our industry,” said Meill. “We are committed to doing everything we can to respond to their needs.”