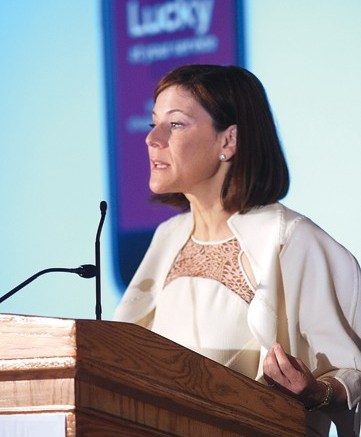 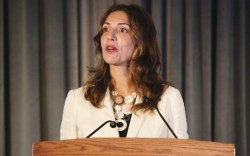 Lucky magazine has turned the iPhone into a pocketsize shoe boutique.

Launched in March with the publication’s spring shoe guide, the application — Lucky at Your Service — is a digital concierge service that, according to Lucky VP and Publisher Gina Sanders, takes the guesswork out of tracking down a specific shoe.

“What we’ve done,” Sanders said on the first day of the summit, “is move from magazine [editorial] to purchase to in-store, all with the tap of a finger.”

• A consumer downloads the free application to her iPhone or goes to the Lucky at Your Service Website.

• Searches for shoes by brand, trend or color option.

• Once a shoe has been picked out, she clicks to find it online or at a local store.

• Store is found using the iPhone’s GPS tracking system or by entering the zip code.

• Consumer sends size, color option and e-mail address to the store of choice.

• Within 10 minutes, via a third-party call center, an alert notifies her that the shoe is being held at the shop.

The program garnered more than 200,000 users in its first eight weeks, with about 40 percent using the iPhone application and the remaining using the Web version. And if Apple features the application in one of its national iPhone commercials, Sanders said, it could see another 3 million downloads.

The service, which has been ranked as one of the top 10 free lifestyle applications on iTunes, also includes a handbag platform and is set to add denim in August. Though she wouldn’t release the details, Sanders revealed she also is looking to create a paid application.

While Lucky’s service is doing its part to usher in a new era of shopping, the unstable economy has left lingering questions about how women’s buying habits have changed.

Patty Nasey, the magazine’s executive director of marketing, said a recent survey by the magazine showed the outlook isn’t all bad, with 93 percent of women saying they plan to shop for new items this spring. “For a lot of women, shopping is a form of recreation and pleasure,” she said. “It’s a passion point that will not and cannot be denied.”

Still, she added, the recession has forced shoppers to reexamine how and why they spend money. “It’s a new reality,” Nasey said. “[Shoppers] are being more mindful.”

The survey, which polled 2,500 women nationwide last fall and this spring, was conducted online and included in-depth interviews with shoppers in New York, Los Angeles and Chicago. Lucky found that:

58% of “passionate” shoppers have cut back on purchases, but can’t wait to start shopping this spring.

90% are cutting back on expenditures other than shopping, including going out and traveling.

87% are glad to be more responsible about what they are spending.

74% are trading down to less-expensive versions of at least one item.

84% agreed new shoes bring the biggest “pick me up.”

82% are not buying pre-season.

77% will pay full price if it inspires, expresses a personal style and is at risk of selling out.