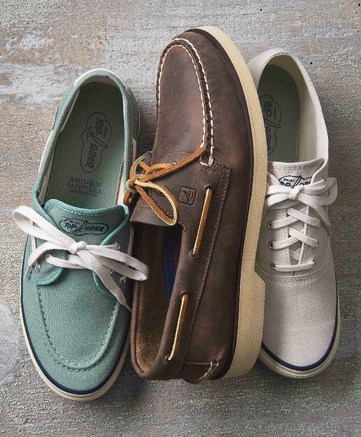 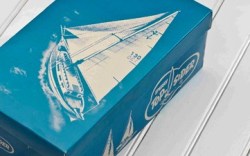 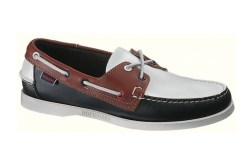 Sperry Top-Sider and Sebago have some milestones to mark this spring, but the two nautical brands are planning for a lot more than simple celebrations. Both are using the important dates — for Sperry, the company’s 75th anniversary; for Sebago, the 40th anniversary of its iconic Docksides style — to enhance their image, solidify their market share and engage new accounts.

At Lexington, Mass.-based Sperry (a division of Topeka, Kan.-based Collective Brands Inc.), recognizing the brand’s founding by Paul Sperry in 1935 is a chance to connect with customers by highlighting its heritage, which plays a key part in its consumer positioning. Calling the occasion a “tremendous opportunity to celebrate the lifestyle enjoyed in, on and around the sea,” Sperry President Craig Reingold said that turning 75 “allows us to speak to the authenticity and equity of our classic brand at a time when consumers are embracing quality and trusted companies.”

According to Karen Pitts, VP of marketing for Sperry, limited-edition product and retro packaging will be rolled out to allow the brand to partner with key accounts — and raise awareness with customers, or, as Pitts put it, to help them “rekindle their relationship with the brand.” Next February, two styles for men and women — a $75 canvas vulcanized oxford and a $95 double-sole version of Sperry’s flagship Authentic Original boat shoe — will deliver to select retailers, Pitts said. For those styles, the brand also will offer shoe boxes that mimic the originals, with a new anniversary logo that calls out the date.

In addition, an online microsite is under development that will communicate directly to customers, but Sperry also is focused on reaching out to retailers. Pitts said the brand was still in planning mode, but hopes to have in-store displays featuring anniversary-themed items and gift-with-purchase promotions, as well as in-store events and custom programs that “really connect the dots for these smaller independent stores.”

Likewise, retail outreach is a key part of Sebago’s plan for celebrating Docksides, according to Kerry Lawton, marketing manager for the brand. While quantities of the special-anniversary, red-white-and-blue Docksides (a best-seller freshened up with colored eyelets and the brand’s old flag) will be limited globally, the shoe will be available to all accounts, retailing for $90 ($85 for women). Retailers carrying the style will receive a banner, window decal and other POS materials when the shoes deliver in mid-February. Themed wallets (a gift with purchase), bags and other items will be available for larger orders. In-store events globally and a Website tie-in are being slated for the middle of March.

But brand execs said the Docksides 40th celebration is ultimately a way of extending Sebago’s reach and influence. Rod Stafford, group VP and GM, said the anniversary style is being launched with a selection of new colors for the season, which could help build sales across the line. The new taupe, blue, green, gold and Nantucket-red styles, which will be merchandised with the anniversary style, should appeal to shoppers drawn in by the special edition, but who ultimately are looking for something more subtle.

Sebago also is using the milestone to look ahead. For spring ’10, it will continue its trend-driven collaborations with brands including Vane and Billykirk. And Mike Walls, director of sales for Sebago, said the awareness created by the anniversary campaign can help drive sales in its youth-focused collaborations and get Sebago in new doors. “Publicizing the iconic product definitely attracts a younger customer,” he said.

And with the continued popularity of boat shoes, building on the collaborations and trends made sense, said Stafford. “The timing was perfect,” he said, adding, though, that the brand would have celebrated the anniversary either way. “Forty is 40.”

For their part, retailers are grateful for the exposure anniversary collections can bring to brands —and their stores.

“Right now, everyone’s into the classic, vintage original look, [so it’s a] good time to introduce the classic original Sebago,” said Abe Rogowski of New York’s Shoe Parlour, which carries Sebago and will be carrying the limited-edition product. “It will definitely appeal to our shoppers. It will add some excitement.”

Tarek Hassan, co-owner of The Tannery in Boston, which will carry both anniversary lines, said the exclusivity of the product and the increased attention the styles get in media and on blogs draw in new customers. “[The shoes are] definitely bringing in the young people and the trendy people,” he said, adding that his stores would take advantage of the provided POS materials to highlight the product and leverage the popularity of the nautical look.

“It’s capturing that [trendy] customer, and the momentum is growing,” Hassan said.