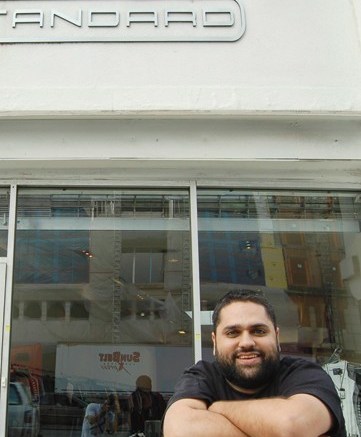 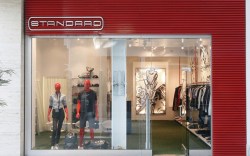 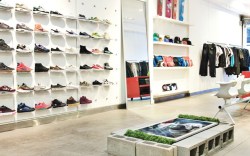 For owner Farshad Arshid, opening his Standard sneakerhead boutique in Atlanta was a return to retail. Arshid, whose family was heavily involved in establishing the Versace brand in Atlanta and the surrounding areas, had left the industry in 2000 after getting “burned out.” But after a few years in the record business, opportunity knocked when he realized he and his friends were running a de facto sneaker-importing business, loading up on hot styles for other friends whenever they were in New York or Los Angeles. “[I realized] there wasn’t a store in Atlanta that had limited-edition sneakers or unique footwear,” he said.

In August 2003, Standard opened in a 1,200-sq.-ft. space in Atlanta’s Buckhead neighborhood, followed by a 670-sq.-ft. location in the nearby upscale Lenox Square mall last November. Today, the stores stock footwear, apparel and accessories, with 40 percent to 45 percent of the business done in shoes. This time, being back in retail is a labor of love, Arshid said. “We’re fans of this stuff. We wear it ourselves.”

THE RIGHT MIX
Standard stocks sneaker favorites such as Nike, Vans, Puma, Alife and DC. Working with vendors is important, explained Arshid, because Atlanta’s fashion-conscious customers want to stay on top of the trends. “It’s an ever-changing market,” he said. “Two, three years ago, we had the hardest time selling high-tops. Now we sell them four to one.”

Newer labels to the store include Generic Surplus, Clae and Gourmet — and fresh brands are key. “We’re the go-to boutique in town, so if there’s a new brand or a hot product with a following, we’ll go hard-core after it,” Arshid said. And while working with emerging labels comes with challenges, the retailer said it’s close to his heart. “I’m a small-guy business. I actually root for the little companies because I want them to succeed.”

SERVICE ISSUES
Until recently, hiring wasn’t a major issue for Standard. “We haven’t had many people work for us because we’re picky about who we bring into the family — and it is a family for me,” Arshid said. But the expansion to the second store and the summer rush led him to put an ad on the store’s blog for help. In staffing, though, he said, there’s one upside to the economic downturn: “As independents [shut down], there’s less competition out there [for quality staff].”

BY DESIGN
Both Standard locations are the handiwork of Arshid and his team and have a lively look with clean-looking shoe walls. “We believe the shoe is the centerpiece, so we keep the wall as minimal as possible,” Arshid said. “Nothing gets in the way of the focus, which should be the footwear.” For the Lenox Square mall location, Arshid chose stark white walls and I-beams displaying the shoes, while spot rugs made of artificial turf are laid out near the try-on benches. “It’s an interesting surface to try shoes on. It’s been a big hit,” he said.

PROMOTIONAL STRATEGIES
Even as Standard embraces new media to get the word out — the store’s Website gets 2,000 to 3,000 unique hits a day, and both the store and its staff are on Twitter — Arshid also likes to reach out the old-fashioned way. There are 3,000 clients on Standard’s direct-mail list, and cross-promotions with other local stores draw new ones. In addition, Arshid leverages his connections in music to bring new artists and DJs into the stores.

And even in price-conscious times, Arshid said he is trying to limit how often he goes on sale. “We do a summer grill-out event once a year and a post-Christmas sale,” he said. “Our sales run four to six weeks. We’re not big on 20 percent off today, 30 percent off tomorrow.” It’s a challenge, he added, especially with the heavy promotions at the local department stores. “We do sometimes share brands, and it’s a nightmare. They ruin a brand and product in a market.”

FACING CHALLENGES
It’s a tough time to be in business. “We’ll be down or flat for the year — the percentage is what we’re trying to work out,” Arshid said. If sales are down in the 10-to-15 percent range, he said, they will count themselves lucky. “We’re certainly surviving, but we’re not popping a bottle of champagne. Our dollars-per-ticket has dropped tremendously. We work twice as hard to make the same sale.”

One major change, he added, is an increased price consciousness among his shoppers. “Price points are an issue for the first time. Shoes that would have sold out in one day before are taking their time,” he said. The new sweet spot has been $85 to $100, not the $110 to $130 of past years. But vendors seem to be responding to the trend with new colorways, materials and other options to make the prices more palatable. “[For customers], the key phrase is discount,” Arshid said.

FEEDBACK
Josh Willis, sales manager for Los Angeles-based Creative Recreation, said Standard’s willingness to take on new vendors and styles has made the store a target for its new casual Select line. And, Willis said, the stores’ premium focus does not come with premium attitude. “[At Standard], they really take the time to get to know their customers. ”

For Vista, Calif.-based DC Shoes, Standard was a natural choice for its first Atlanta-area store collaboration: the DC Life Admiral high-top, which debuted over Mother’s Day weekend and sold out in the first day. According to Ida Kay Khabazian, lifestyle marketing and product placement manager for DC, Arshid and his team’s dedication and connection to their consumer base made them the top choice. “Farshad is passionate, sincere and proactive,” she said. “When someone loves what he does, it really shows. Farshad and Standard are the epitome of this.”

THE ATLANTA SCENE
Neighborhood vibe: Both Standard locations are in the upscale Buckhead neighborhood: one on Peachtree Street and the other in Lenox Square.

Customer base: Arshid said he targets three main groups: the 16- to 22-year-old fashion-conscious kids, the 25- to 35-year-old shoppers, and the older guys who want a Gucci alternative but “don’t want to wear gym shoes.”

Competition: Atlanta sneaker fans can choose from other trend-right boutiques for shoes, as well as the major department stores.