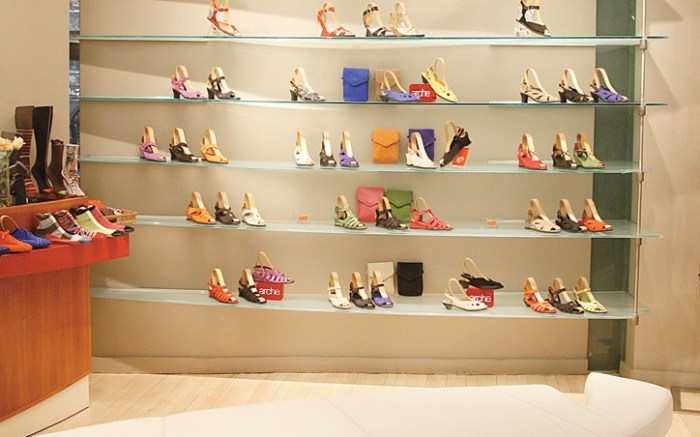 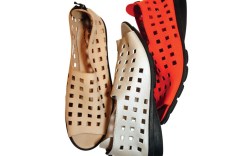 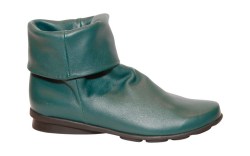 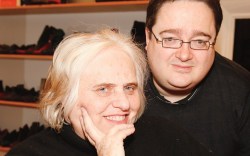 After 40 years, French brand Arche is sticking to its winning formula.

“Everyone overuses the word ‘comfort’ today,” said CEO Pierre-Emmanuel Hélaine, whose father, Pierre Robert Hélaine, founded Arche in 1969. “In fact, six or seven years ago, we decided not to use the word ‘comfort’ in our ads [because] comfort is in our genes. If a shoe is not comfortable, it’s not in the line.”

While Arche is based in France, the brand can be found in the U.S., Greece, England, the Netherlands and Canada, among other places. “We have very loyal customers,” said Martine Verbrugghen, president of Arche USA. “It’s a cult — once [customers] buy a pair, they’re hooked.”

Still, Verbrugghen admitted, today’s tough economic climate has even avid Arche supporters scaling back. Instead of purchasing four or five pairs at prices ranging from $275 for sandals to $750 for boots, many consumers now only buy three pairs. Despite the slight dip, Verbrugghen said that U.S. sales — which account for 20 percent of the overall business — have grown 10 percent in the last five years.

Arche launched in the States in 1984 with a store on New York’s Madison Avenue and has since added four locations in New York, as well as a store each in Boston, White Plains, N.Y., and The Venetian Hotel in Las Vegas, its newest market. According to Verbrugghen, when the hotel was seeking tenants for its latest Palazzo addition, Arche approached management about securing a spot. The request was ultimately turned down because the collection did not meet the hotel’s high-end product criteria. However, when Jimmy Choo shuttered its store in The Grand Canal Shoppes at The Venetian, Arche’s bid for space was accepted and opened up shop in April 2008. “We’re the only store that carries our brand in Las Vegas,” Verbrugghen said.

Operating its own retail stores gives Arche an opportunity to experiment with trendier merchandise, as well as offer handbags, belts and a concise men’s offering, said Verbrugghen, who owns two of Arche’s New York stores. “We can take a little more risk and bring in new things,” she said.

On the wholesale side, which accounts for half of Arche’s U.S. business, Arche has around 120 retail partners. Many stores point to the brand’s popularity as a big factor in its success. George Morris, owner of Reason’s in Sarasota, Fla., said Arche has some of the most loyal customers he’s seen. “We can do an Arche trunk show and have a cadre of people [come] to the store to see what they have,” said Morris, whose shop has been carrying the line for 20 years. “Customers are loyal to Arche even though the prices have gone up like those of [so many other] European suppliers.” (Arche’s prices have increased 8 percent over the past five years due to the rising euro.)

Bob Fields, co-owner of Redondo Beach, Calif.-based Riviera Euro-Comfort, said Arche remains among the store’s top two performers each month. When it comes to ballet flats, an Arche signature, “there are zillions from everybody,” Fields said, “but [Arche’s] are the most comfortable around.” In fact, Fields added, the brand’s latex outsoles are a key part of its comfort success and are often used by his staff as a selling point.

Beyond the U.S., China is another key market for the brand. Hélaine and sister Catherine Marie-Emmanuelle Hélaine, VP of the brand, set their sights on China a decade ago, and their gamble paid off. “Ten years ago, it was an emerging country,” recalled Hélaine. Now, China accounts for Arche’s largest volume, with product sold through 65 shop-in-shops in 30 cities across the country. In order to meet the growing demand, Arche manufactures product in China for the local market and prices it 10 percent below the French-made shoes.

The Chinese market also opened the door to a younger customer base for Arche, whose core audience is the 45-and-over crowd. “China is younger [customers] — younger people have money there,” said Hélaine.

While the second generation of Hélaines is eager to take risks to broaden Arche’s reach, the siblings remain focused on their father’s unique blend of comfort and style. “Our unstructured looks make it hard [for the shoes] to have shelf appeal,” admitted Hélaine. “But once they’re on the foot, the shoes come alive.”