A Day With Rupert Sanderson 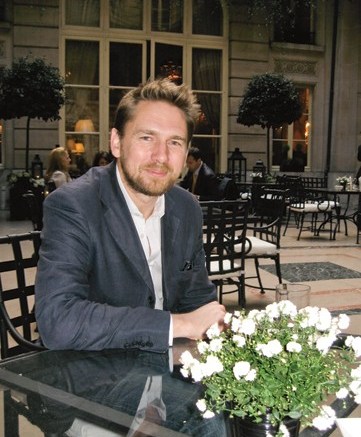 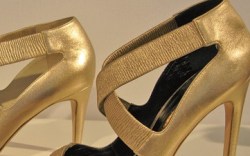 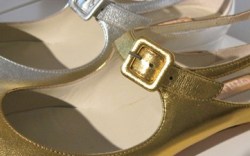 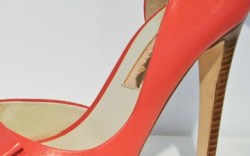 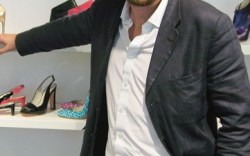 On the first day of Premiere Classe in Paris, I meet British designer Rupert Sanderson inside the blistering-hot tent in the Tuileries. We walk through the designer’s spring ’10 collection and immediately escape outside, into the crisp October air. Strolling down Rue Rivoli, we discuss the many mid-heels that Rupert is offering for spring. I mention this has been a major trend, as retailers push for the reinvention of an all-day heel. Rupert tells me he’s been experimenting with lower heel heights for several seasons, but adds, chuckling, “I tend to be a smidge early. I’m always getting yelled at for that.”

We sit in a café on Rue Rivoli and I order champagne and a crêpe, while Rupert goes for a snack and a glass of red Brouilly wine. Our conversation drifts back to his upcoming styles, and in discussing one particular silhouette, Rupert sketches on a napkin to illustrate. The garcon gets a kick out of this. “Cheers to the back page,” ventures Rupert, as we clink glasses. I ask Rupert how everything has been going, and he looks encouraged. “It’s been a great year at retail, especially for a small, largely self-funded company. We’ve got two stores in great parts of London and a fantastic transactional Website,” he says.

As for recent news, he recounts his collaboration with the Royal Opera House to create shoes for its upcoming production of “Aida.” “We also turned our shop into a cinema for three days for proper screenings (popcorn and all!) of Michael Powell and Emeric Pressburger’s ‘The Red Shoes,’ a 1947 British classic based on Hans Christian Andersen’s story of enchanted ballet slippers,” he recalls. It just so happens that Rupert’s wife’s great-grandfather, Hein Heckroth, was the art director of that film and received an Oscar for his work on it. According to the designer, it is also purportly Martin Scorcese’s favorite film and has just been restored by a film school in Los Angeles with funding from the legendary filmaker. Over three days, Rupert and his team staged private screenings in their Bruton Place shop, with guests including Roland Mouret, Sir Richard Eyre and others friends.

Rupert considers himself a man of diverse interests. Before attending Cordwainer’s College, he started in advertising (“I was a suited ‘Mad Men’ sort”) and says he’s still “always interested in new stuff to be getting on with: shops, collaborations.” That’s why he’s especially enthusiastic about his collaborations with costume designer Moritz Junge for the Royal Opera House, which will debut in April, as well as his news-making runway gig for Karl Lagerfeld. Rupert describes the day he received the call from Lagerfeld’s team as somewhat of a waking dream. “I heard ‘we’ve just got a call from Karl Lagerfeld. He wants you to do his shoes.’ And I thought, ‘Yeah, right.’ It’s that call you never expect to receive,” Rupert says.  Although the designer claims he generally prefers other types of collaborations over runway, he jumped on this partnership. “I’m interested in other things and open to them. [Karl Lagerfeld] is so prolific, he has to trust people and he’s got a great team, so he can move quickly. Team briefings can be only 30 minutes and then it’s ‘brilliant, off you go.’ He’s not asking me to reinvent anything. He likes what I do.”

Beyond that, Rupert discusses the crazy week he’s had in Paris, and as his Blackberry rings again, we hear that actress Freida Pinto is at his store in London. “Hopefully she’s buying lots of shoes,” the designer jokes. As for how he’s feeling, Rupert claims to be “enjoying the balance between running our own show and working with other people — both in fashion and elsewhere.” The designer, who now has a controlling interest in his factory, says it took a long time to get everything up and running, but he enjoys managing the factory’s other production. As for his own lines, rather than looking back constantly at his archives (which apparently he is loathe to maintain), Rupert is interested in treading new ground.

For Fashion’s Night Out in London, Rupert and his team, along with many shopgoers and friends, attempted to create the highest heel in the world using 50-centimeter squares of paper. Each of 166 bright-pink squares represented a pixel, which were laid out and photographed from above in London’s Berkeley Square. “My idea was to have a satellite take a photograph of this vast shoe from space, and we came very close to arranging this with Google Earth.” But in the end, Rupert chartered a helicopter and was furnished with the just-launched M9 Camera by Leica, as well as an experienced aerial photographer, who, from a harnessed position in the open doorway, shot the shoe from 1,200 feet up. In their excitement, Rupert recounts, his group was caught off guard by a strange voice on their radio. “It was the diplomatic guard telling us we were over-flying the American Embassy in Grosvenor Square, and if we didn’t stop, they’d tell Michelle Obama to quit buying my shoes,” the designer recalls, laughing. “God knows, is [the picture] going to be of any value? I don’t know. But I enjoyed it.”

I ask Rupert what he’s looking forward to for spring and he responds, “To selling my shoes in Saks Fifth Avenue, Bergdorf Goodman and independents.” A big fan of New York, Rupert says, “I’ve been so pro-States, and we definitely want to do more. Living in America for three or four years would be great fun.” Although he reminds me he has a family to look after, the father of two young sons, ages three years and five months, is certainly not the type to count anything out.