A Day With Rafe 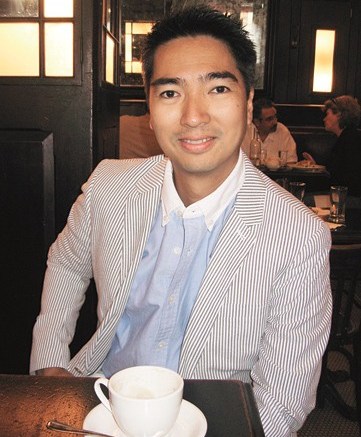 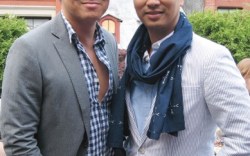 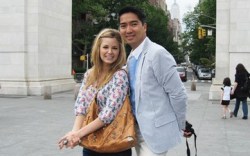 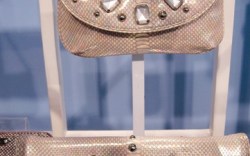 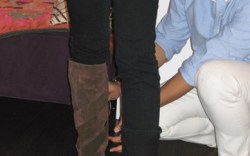 Any day that starts at Balthazar is a good day in my book, so I’m happy to take designer Rafe Totengco’s suggestion that we meet last Tuesday at the Soho restaurant for breakfast. Armed with double cappuccinos, we talk about the latest happenings in his footwear and handbag brand, Rafe New York. For fall, the designer says his typically uptown girl has moved downtown. Embracing his edgier side, Rafe went for grittier hardware and tractor soles.

There have also been other big developments with the brand. Rafe New York recently became the first U.S. licensee for Italian holding company AP Bags, which works with such lines as Francesco Biasia, Coccinelle and Mandarina Duck. “It’s really exciting for us,” Rafe said. “This not only gives me the breathing room to concentrate on what I do best but also allows us to take it to the next level with international distribution.” AP Bags will take over the sales, production, distribution and marketing for Rafe, who will continue to design with his own team in New York.

Throughout breakfast, Rafe’s enthusiasm for this new venture is apparent. He also lights up when I ask about his blogging, which has accelerated recently. In fact, Tokyo-based SPUR magazine picked up his blog, Canitellyou.rafe.com, for their own site, after reading it at the suggestion of Japanese model Anne Watanabe. “They say their translation isn’t always spot on, but they get it,” Rafe laughs. And Daman magazine out of Jakarta, Indonesia, also purchased the right to print particular posts. They even want to have a blog party for the designer in Jakarta. “It’s great because it brings attention back to the brand, but it’s never in your face,” he explains. Rafe also participates on Lookbooks.com and Twitter. What’s next? “I don’t know,” he jokes. “I’m back-blogged.”

Funny, but seemingly untrue. The designer’s newest blog concept has been brewing since he accrued a following on his Facebook fanpage. Postings of women wearing his accessories piqued his interest. “Everybody wants to know about the real people,” Rafe says. “The New Yorkers, the Hong Kong girls. People are asking, ‘Who is that girl? What’s her story?’” So the newest blog in the Rafe portfolio will be “Rafe loves …” Starting soon, the designer will post every two weeks a picture of a featured person outfitted in a Rafe bag or shoes, with answers to questions such as her favorite bar, guilty pleasure or raison d’etre. The “Rafe loves…” blog will be hosted by Blogger with links to Rafe’s other pages.

Rafe tells me he has scheduled a photo shoot later in the day in Washington Square Park with the debut “Rafette,” a New York University grad student who resembles a young Brigitte Bardot.

After breakfast, Rafe and I walk up Lafayette Street to the vintage mecca Amarcord. I am struck by a sequined bib necklace that I can’t leave behind, while Rafe inspects a two-tone leather overnighter. He leads me to the “inner sanctum,” where they store a plethora of vintage bags and out-of-season racks. What is he looking for? “I’ll know it when I see it,” he responds.

Rafe, who says he got his start from “being in the right place at the right time” still considers his brand to be flying under the radar, although his Target handbag collaboration two years ago was a home run. “I was the first accessories brand to work with them, so we were still figuring out the formula. I passed at first, thinking, ‘I’m not a household name.’ And then I realized that’s exactly why I should do it!” The designer says he was impressed with the quality of the samples and found Target to be a flexible partner. Most of all though, Rafe says, “I don’t know if you can put a value on what they did for me from a marketing standpoint.”

We take a quick cab ride to Rafe’s studio on Fifth Avenue at 17th Street and arrive just in time to meet with a representative from Milaaya Embroideries, a Mumbai, India-based embellishment firm. The designer quickly runs through the swatches and arranges to keep the samples until he can edit them down further. That done, Rafe asks, “Now, shall we do a shoe fitting?” The fall samples for production approval have arrived, and Rafe takes detailed pictures of the necessary adjustments. Overall, he is satisfied, “The Chinese have figured out a way to manufacture close to perfection,” an outcome he suggests is not guaranteed in Italy and no longer possible in New York. “Twelve years ago, when I started, they had all the infrastructure in New York — leathers, hardware. Now, the machinery is outdated and labor is too expensive.”

After lunch at Tarallucci e Vino on 18th Street and the mini photo shoot at Washington Square Park, Rafe and I check in with our respective offices before meeting again at the Afghan Hands event. There we are joined by fellow designer and friend Peter Som. As we visit on the roofdeck, Rafe tells Peter about his serendipitous meeting with Mexican sculptor Jose Davila at a friend’s barbecue in Los Angeles over the weekend. Both designers gush about their love of his work and we decide life is all about serendipity.