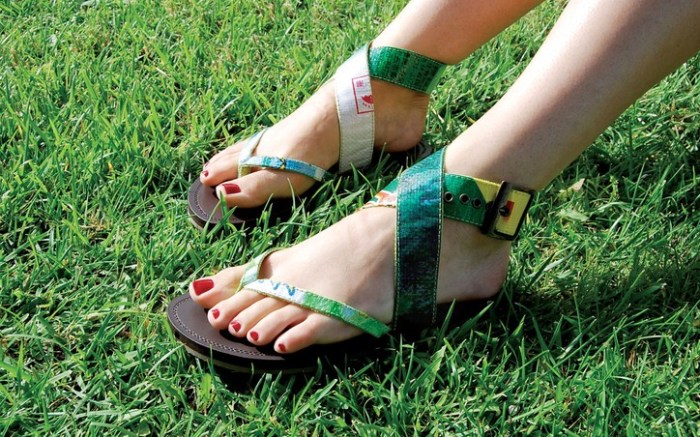 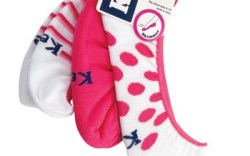 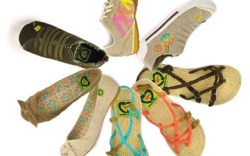 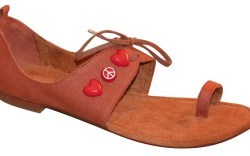 Rice Stuff
BC Footwear is going plastic-bag chic this spring. The Los Angeles-based brand is introducing its “I Used to Be a Rice Bag” collection, featuring shoes that incorporate recycled Chinese rice, detergent and storage bags into their construction. The goal is to reduce waste and energy usage by keeping bags from the landfill and reusing the plastic in footwear and accessories. The offering includes two styles of shoes — flip-flops and wrap sandals (at right) — as well as a cell-phone case. Because the items are fashioned from individual bags, all have a unique pattern and print. The shoes will retail from $30 to $48 at Free People stores, while the phone case will sell for $20 at Urban Outfitters.

On Your Feet
Keds, a division of Lexington, Mass.-based Stride Rite Corp., is expanding its women’s hosiery this spring with a collection of colorful shoe liners, ideal for wearing with the ever-popular ballet flat. About a dozen different patterns are available, including polka dots, argyles and stripes. The socks are made using a cut-and-sew technology that leaves no seams at the toe. They will sell for about $7 for a pack of three at retailers including Macy’s and Stride Rite, as well as at Keds.com. Keds licenses its legwear line to Oklahoma City-based McCubbin Hosiery, which also makes socks and tights for Stride Rite and Absorba.

Fly Girl
Cole Haan wants to make everyone feel like an Olympian. The Yarmouth, Maine-based brand has created a women’s fashion sneaker featuring the Flywire technology that its parent company, Nike, debuted at the Beijing Olympic Games this past summer. The thin mesh material offers support without bulk and was used in some of the Nike shoe styles donned by athletes during competition. Now, it is making its way into Cole Haan Sporting, a collection launching in spring ’09 that fuses athletic technology with fashion. It will appear in one women’s style, which comes in three colors and will retail for about $198. The company is also offering a men’s Flywire style as part of the Sporting collection.

Green Piece
Rocket Dog is greening up for spring. The Hayward, Calif.-based brand will roll out a series of six eco-friendly styles in April. The offering includes sneakers, sandals and flats, retailing from $49 to $69. Each pair will feature a special sales tag describing the sustainable elements used in the shoes’ soles, stitching and uppers, including organic cotton, hemp and recycled aluminum. The shoes will be sold at specialty retailers, surf shops and department stores, as well as on the brand’s Website, Rocketdog.com.

Magnetic Pull
Newcomer Opposites Attract, based in Mount Laurel, N.J., is jumping into the juniors’ market. The brainchild of designer Rick Kramer, who has worked for Penny Loves Kenny, the brand will bow several wedges, espadrilles, flats and sandals (at right) with leather uppers and jute accents. The shoes feature interchangeable canvas and leather ornaments — in motifs such as hearts, peace signs and flowers — that adhere magnetically to the shoes’ surface. Targeted to specialty boutiques and independents, Opposites Attract will retail from $50 to $90 and deliver in February.