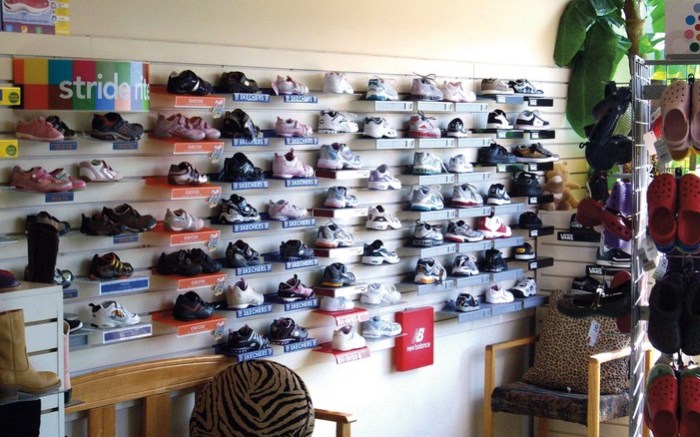 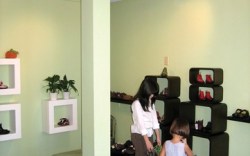 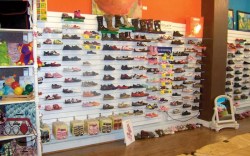 It might seem counterintuitive for footwear retailers to stake a claim in Nordstrom’s backyard, but three Seattle kids’ boutiques are proving it can be done. And maybe that’s not all that surprising considering the department store giant helped parents everywhere realize that children’s shoes are just as important as adult shoes. With a focus on service, a mix of hard-to-find brands and creative marketing — not to mention a little independent spirit — these retailers are putting their own stamp on the crowded and competitive Seattle scene.

Bruce Stern’s creative approach to selling kids’ shoes keeps customers coming back for more. As the owner of The Shoe Zoo, Stern likes to hand out animal crackers to kids and offers their parents frequent-buyer cards. Once customers have bought a dozen pairs, the 13th is free. He also has been jazzing up his sales events — with ideas such as a “Deal or No Deal” promotion, where customers are invited to find a shoe on the sale rack and make Stern an offer. “I told them not to worry about crazy offers,” he said. “I thought, ‘A sale’s a sale.’ Let’s do something. Let’s be interactive.”

His efforts are paying off. Despite the difficult retail climate, Stern expects sales to be up roughly 20 percent over last year. In part, he credits the store’s location, in close proximity to Seattle Children’s Hospital and the University of Washington. But he also said his customers understand the importance of quality children’s shoes and appreciate his expertise.

Stern got his start in the women’s business at Seattle mainstays including Nordstrom, Frederick & Nelson and Jay Jacobs before opening The Shoe Zoo in 1988. “My customers know that with children’s shoes, you get what you pay for,” he said. “If I was a kids’ boutique selling clothes, I would be crying the blues right now, even in this area. People can save money by buying those things at a national chain store, but it’s [different with shoes].”

Plum Children’s Shoes has garnered a loyal following beyond Seattle’s borders, thanks to the Internet and a well-edited mix of hard-to-find labels. Owner Karen Garland never intended to go toe-to-toe with the likes of Nordstrom, REI and Target (all of which have a major presence in Seattle), so she cultivated relationships with small, niche brands, including Pom D’Api and Romagnoli, among others.

Now she is one of the few U.S. retailers to carry those brands, making an online strategy both logical and profitable. Garland launched an e-commerce site about three years ago, and it now represents roughly 75 percent of her business. Google ads and the purchase of key search terms, such as Pom D’Api, have paid off, she said.

Still, the economy has been a challenge. According to Garland, Plum’s business dropped off in October, both in-store and online. She expects total sales will be down slightly for the year. “I thought it didn’t affect me, but it does,” she said. “I’m buying more classic shoes than I did before — things that are not as trendy. And I’m cutting down on brands and future orders.”

To attract customers, Garland said she will focus on public relations, noting that editorial coverage in local magazines and newspapers moves the needle more than advertisements. She is also searching for a free indoor space, where area children’s merchants can host a sales event to clear merchandise. A similar event in June attracted more than a dozen stores and huge crowds. “It was very successful: We all made more [at the sale] than in our stores that day,” Garland said. “Everyone wanted to do it again.”

Mon Petit Shoe has been more than a decade in the making. On a visit to her family in France with then-infant daughter Chloé, Tiffany Lysene was amazed by the styles and the selection of children’s shoes. “I hadn’t found any store in Seattle that offered the variety and the fashion,” she said. “I wanted to bring that here.”

Still, Lysene, who was in the restaurant business at the time, didn’t move on her idea immediately. Instead, she focused on raising a family — Chloé now has three siblings — and her budding manufacturing business, which produces party novelties. Then in 2006, the perfect storefront became available in the bustling Ballard neighborhood. It had previously housed a toy store, so a children’s shoe boutique was an easy leap for the locals, who make up the bulk of her customer base.

Mon Petit Shoe has been a success, according to Lysene, who runs the store with her husband, Ivan. Business will be up more than 30 percent this year, despite a slight dip in October, which she attributes to the weak economy. She said she remains focused on providing a unique experience to customers, and constantly looks for emerging trends in footwear and store design when she travels.

She’s also got her own secret weapon: 11-year-old Chloé, who often shops the shoe shows with her mom and isn’t shy about giving feedback. “She definitely has an opinion on what’s cool and what’s hip,” Lysene said.