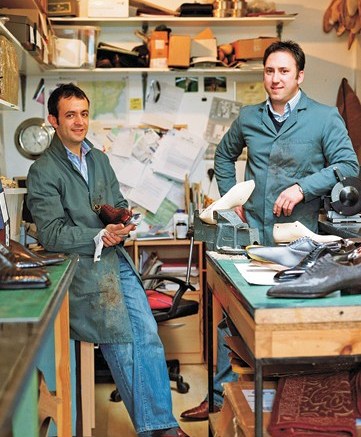 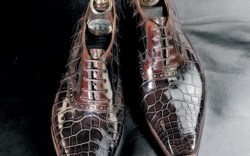 In just two years, English shoemakers Tony Gaziano and Dean Girling have created a solid following for both their bespoke and ready-towear lines of men’s shoes. Earlier this year, they debuted boots, and in the coming weeks, they plan to launch high-end slippers for men, followed by bags and accessories, and eventually women’s shoes.

Each new category — also available in both bespoke and ready-to-wear lines — is part of a long-term plan crafted by the duo just before their 2006 launch.

In addition, they are setting their sights on gaining more retail clients to sell their high-end footwear. Gaziano & Girling is currently sold in boutiques in Japan and Europe, and in three locations in the U.S. While breaking into the U.S. market has been diffi cult, they hope to add a department store soon.

The partners met at London men’s shoemaker George Cleverley, where Gaziano managed the bespoke department and Girling also made shoes. Both then worked with Edward Green before striking out on their own.

“There are very few shoemaking businesses with directors who have the combined skills we’ve got,” said Girling, who heads up ready-to-wear, while Gaziano oversees bespoke. “We’re quite unique in that Tony and I can produce shoes without anybody else if we needed to.”

Gaziano & Girling’s factory in the Northampton area of England employs 12 workers for ready-to-wear. Bespoke is a smaller venture, in which Gaziano himself still does the last-making, pattern sketching and leather cutting. As such, wait time is generally six to eight months for bespoke, compared with fi ve months for made-to-measure, ready-to-wear shoes.

The biggest challenges so far, Gaziano said, have been creating a business structure and training workers. “So many [companies] increase production without increasing the level of the workforce,” he said. “Don’t ask a guy to make 15 pairs instead of 10 today. Something’s got to give.” In order to continue growing, he said, the company will need more skilled workers.

One diffi culty that has so far eluded them is the bad economy. With much of their ready-to-wear business coming from Japan, other more-troubled markets haven’t affected business. “Guys who have money still have it,” said Gaziano.

“We’re achieving our goals, and I’m happy with the way business is going,” Girling said. “We ’re still in our infancy — and Rome wasn’t built in a day.” The British shoemaking industry is known for the high quality, comfort and durability of its products, but Gaziano and Girling also set out to make more current styles a part of their brand. In fact, the ready-to-wear range is updated regularly with new designs, both contemporary and classic. The pair also offers limited editions. On the bespoke side, customers tend to be more adventurous because the shoes are not generally for everyday wear. Still, Gaziano said, he wants both lines to be consistent.

“What we’ve done is create a singular identity, where the ready-to-wear mimics our bespoke,” said Gaziano. “It’s different from the traditional Northampton shoe.”

Retailers who carry Gaziano & Girling say the shoes are more fashion-forward than their English counterparts.

“These guys are setting the groundwork for what the future of English shoemaking can be,” said Steven Taffel, owner of Leffot in New York. “The styles and lasts are contemporary. It’s sort of a balance of traditional shoemaking and something new that hasn’t been seen here before.”

Leather Soul in Waikiki, Hawaii, added Gaziano & Girling to its mix last month. “They’re still the classic, well-made English shoes, but they have a little bit of a younger fl air to them, which you don’t really see from the traditional British shoemakers,” said owner Thomas Park. Next up, the soon-tolaunch slipper collection will offer luxury house shoes with hard leather soles, different fabrications and monogramming. The women’s line, expected in 2011, will feature classic styles such as penny loafers and brogues, as well as a fashion collection of stilettos and sandals. Prices for the slippers and women’s line are still to be decided, said Gaziano.

As the brand continues to grow, the partners are thinking about expansion beyond the fi rst fi ve years. One idea includes establishing fl agship stores in major cities.

Though they started with their own money and haven’t borrowed from a bank, taking on investors is also a possibility in the future. “There will probably be somebody who will come along and put the right offer on the table,” Girling said. “We have had people approach us, but at the moment, it’s just the two of us.”