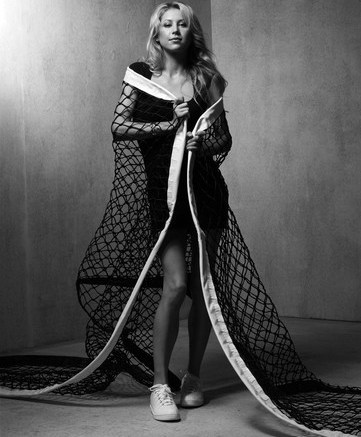 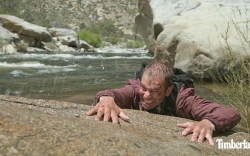 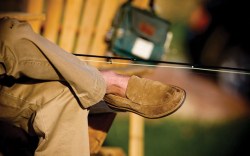 Classic Act
You never know what you’ll see at an ad shoot. “And here’s Anna in our ball pit,” Jennifer Wiederman, VP of marketing for K-Swiss, said, gesturing toward tennis star Anna Kournikova, who was striking a pose in a tub-like structure filled with white tennis balls. “Ball bath,” corrected K-Swiss EVP David Nichols, who was watching photographer Zach Gold shoot the blond beauty for K-Swiss’ spring ad campaign. The Westlake Village, Calif.-based company is pulling out all the stops for “Pure Classic,” a global campaign that features celebs and athletes modeling its retooled Classic style in a clean, mostly black-and-white set. In this economy, Wiederman said, “everyone wants authentic things. You want things that are classic.” Destined for print, TV and outdoor, with an extensive Web component, the campaign was shot at New York’s Splashlight Studios over four days earlier this month. The spots will debut in March issues of GQ and Lucky, slightly ahead of the release of the remastered Classic shoes. Joining longtime K-Swiss face Kournikova will be some of the brand’s triathlon and tennis athletes, as well as Ed Westwick, from The CW’s “Gossip Girl.” Wiederman said the actor was a great fit for the brand because of his ultra-prep look onscreen — and offscreen. In fact, she said, Westwick took home a souvenir of the shoot: a new Classic style. “He wore them right out the door,” she said.
— Jennifer Ernst Beaudry

Nature Attacks
Normally, the green movement is no laughing matter, but Timberland’s new TV commercial for its Earthkeepers brand is a knee-slapper. The 30-second spot, called “Friends,” was created by Leagas Delaney and features a hiker in non-Timberland boots getting knocked around by wind, water, bees and even trees. Meanwhile, a hiker in Earthkeeper gear is assault-free. The ad ends with the ominous and tongue-in-cheek tagline: “Wear new Earthkeepers made with recycled materials — or nature might get you back.” Not only is it a worthwhile message but also entertaining — a perfect candidate for viral distribution. The ad is being broadcast online at Timberland.com/earthkeepers and on ESPN and Comedy Central. Print ads are appearing in this month’s GQ and Outside and in the December issue of Fader.

All American
For its 2009 marketing campaign, men’s brand H.S. Trask has snagged photog David Stoecklein, best known for his depictions of the American West (and specifically the Marlboro Man). Stoecklein, who shot the campaign in October at his ranch in Sun Valley, Idaho, created glossy lifestyle images that capture the shoes’ casual style and add a new level of sophistication. Company President Jim Clopton said it’s all about wish fulfillment for men. “Our customer doesn’t live seven days a week in Montana or Idaho, but it’s the place he aspires to be the most,” he said. “It’s the reward for the success he’s achieved.” The campaign will start with catalogs and POPs for spring and expand into print in the fall.

Ad-Ons
Puma appointed Droga5 as the lead agency for its more than $100 million global marketing account. … Simple hired creative agency JWT to develop a new brand message debuting early next year. … Onitsuka Tiger is celebrating its 60th anniversary in 2009 with a campaign and product launches inspired by the Chinese Zodiac. … Soles4Souls issued a fundraising challenge to bloggers and social media users on its new Website, 50000shoes.com.