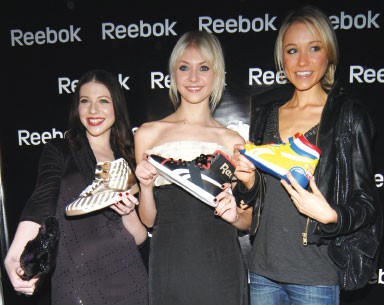 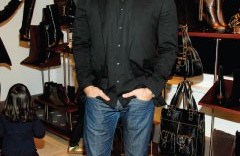 Michelle Trachtenberg is a busy lady (three movies coming out in 2009!), but she still had time to stop by the grand opening bash for Reebok’s new pop-up store in New York last week. Insider caught up with the actress as she joined a throng of hipsters and sneaker fans — including Katrina Bowden of “30 Rock” and Robert Buckley from “Lipstick Jungle” — and got down to tunes being spun by sneakerfreak Nick Cohen (of Upper Echelon when he’s not on the decks). And while rumored new RBK face Leighton Meester wasn’t in attendance, her “Gossip Girl” co-star Taylor Momsen hit the scene in fierce TopShop booties she called “so comfortable.” Momsen said she’s been a fan of Reebok “since [she] was 5,” which by Insider’s count gives her a full decade of love for the kicks. The actress said she has some of the brand’s New York City-inspired styles — a sentiment Trachtenberg (above, left) echoed. “I love the Coney Island Freestyle because I’m from New York,” she said, adding, “I have to look around in here. I could get some good ideas for my boyfriend for Christmas!”

Ross Evans, VP of marketing and community initiatives for Two Ten Footwear Foundation, is optimistic about the organization’s annual dinner, scheduled for Dec. 3. And with good reason — with a little more than $1 million raised so far, the 2008 edition has “broken all our fund-raising records,” Evans told Insider. Much of the credit, he said, goes to Deborah Ferrée, vice chairman and chief merchandising officer of DSW, and her team. “DSW has been so integral in every aspect of the dinner,” Evans said of Ferrée, chair of this year’s dinner. This year’s event will feature a few departures from previous years. Two Ten is skipping the Crystal Slipper award (“Having a big celebrity bash — it just didn’t feel right for the times,” Evans said), and the annual auction has been moved online. Bidders can visit the organization’s Website for two weeks starting Dec. 4 to bid on a Judith Leiber bag, a Steuben glass vase and other covetable items. A limited number of tickets to the shindig are still available at Twoten.org.

All in the Family
“All My Children” star Cameron Mathison is feeling Via Spiga. “I don’t think I’m very stylish, but when I put on a pair of Via Spigas, I feel fashionable,” he told Insider at the opening of the brand’s flagship in New York last Wednesday. “I’ve been wearing them for years,” Mathison said, adding that he regularly sports the brand on the AMC set.

The newest sneakers from edgy designer Jeremy Scott look like they are ready for liftoff — complete with wings. The avian-inspired style is part of a new eight-piece collaboration with Adidas for its spring ’09 Originals by Originals line. Scott told Insider his contributions were inspired by everything from boxing to tuxedos. “I thought about people I like, what my friends would want to wear and things that didn’t already exist,” said Scott, who will design styles for fall ’09 and spring ’10, as well. Designers Alyasha and Kazuki have also joined forces with Adidas for a total of 24 footwear styles, hitting boutiques Feb. 1 and Adidas stores March 1.