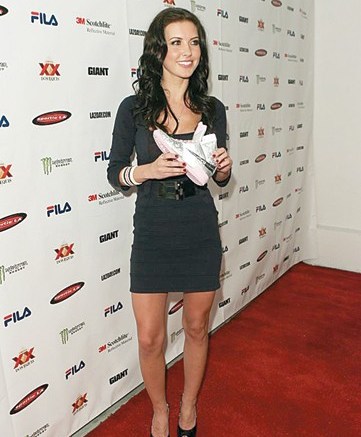 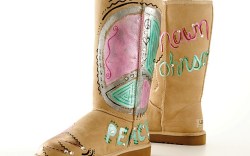 At the debut party for Fila’s new Melrose women’s shoe collaboration with Sportie LA and 3M, Fila USA’s initiative manager, Marcus Hoed, showed off the new kicks, which Sportie LA co-owner Isack Fadlon said breaks new ground in collaborative projects. “Rarely do you see a collaboration shoe that is a totally new silhouette, and a collaboration specifi cally for women,” he said, noting that only 60 pairs of each of the three styles were made. “The fact that we can do a 60-pair collaboration is remarkable and speaks volumes about where Fila is headed.” Hundreds of eager partygoers — including “The Hills” star Audrina Patridge, Aimee Teegarden and DJ Joel Madden — stopped by the bash, held at L.A.’s posh Sunset Mansion overlooking Sunset Boulevard. Hoed also confi rmed that the company is closing its Madison Avenue fl agship store at the end of this month. Now the company is on the hunt for another New York location. “As an original Italian sports brand, it would be great to be in Little Italy,” Hoed said.

Last Wednesday, Bloomingdale’s revealed plans for its fi rst overseas store at the Dubai Mall in the United Arab Emirates at a cocktail party at the American Museum of Natural History in New York. Execs said the store would be licensed to Al Tayer, a leading luxury retailer in the region, and is slated to open in February 2010. “This is the moment to be aggressive,” Chairman and CEO Michael Gould told Insider. “What we can do in Dubai is translate 59th Street [there]. It gives us an opportunity to have something original.”

Gould’s predecessor, Marvin Traub, said that opening the Dubai store had been in the pipeline for years. “I thought, if Harvey Nichols can do it, just imagine what Bloomingdale’s can do,” he said.

Lots of people are willing to shell out big bucks to walk in Kelly Ripa’s boots. For Ugg’s sixth annual Art + Sole charity online auction, where proceeds go to the St. Jude’s Children’s Research Hospital, the TV host’s custom-designed boots were leading the pack of celebrity styles, with a high bid of $2,700 at press time. This year, celebs including Cindy Crawford, Sharon Stone, Jennifer Garner and tween queen Selena Gomez put their design skills to work on boots for the auction, which ended on Sunday.

Even Olympic gold medal gymnast Shawn Johnson joined the charity competition and put her boots (above) on display at the new Ugg store on Columbus Avenue during FFANY.

Sure, times are tough, but Jeff Bart, VP of sales and operations at Miz Mooz, still has grand plans for the brand. “Ultimately, we want to start opening our own stores,” he told Insider last week during a line preview. “It’s always on our mind.” The store on Broadway near Fourth Street in New York is currently the only Miz Mooz store and still carries other brands. But dedicated Miz Mooz stores, stocking only Miz product, could start popping up as early as next year. — With contributions from Meghan Cass and Lindsay E. Sammon