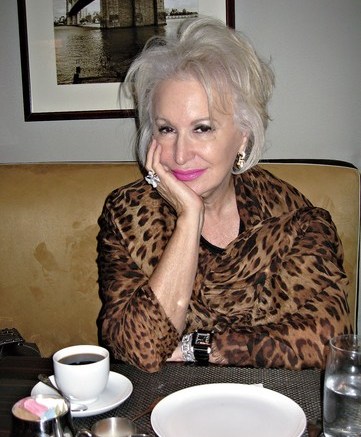 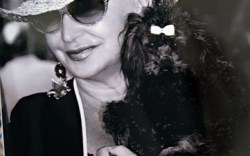 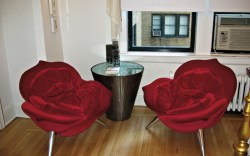 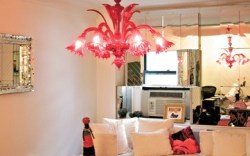 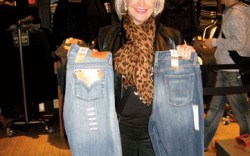 Beverly Feldman has always believed in ‘designing a whole life.’ A day spent with the designer shows how it all comes together.

11 a.m.
I arrive at Beverly’s apartment on East 55th Street and walk into a sparkling foyer of crystal-laden chandeliers, oversize antique mirrors and a rose-shaped carpet. Beverly’s “too much is never enough” slogan finds its origin in the woman, but also manifests itself in the surroundings she has created. I marvel at the gorgeous Chihuly-esque chandelier in the living room, and Beverly tells me, “I found that in Italy and bought it for the store. After I bought it and shipped it over — it cost me a fortune — I found out the ceiling wouldn’t hold it.” On my tour, I also find the rose chairs from the New York boutique in her bedroom, where they’ve been since she closed the store in September. “I closed it before the crash, so I guess I get bonus points for that,” Beverly says, laughing. “It was the only store in the 57th Street area without major backing, and e-commerce is the way of the modern woman anyway. Now’s the time I have to take care of my wholesale customers. But the store was very satisfying for me because it had a lot of magic, and I’m told it made people happy.”

11:30 a.m.
Beverly tells me her collection is 20 percent inspired by Paris and 80 percent vintage, but recently she was watching “Gentlemen Prefer Blondes” and found “the perfect last,” which she will incorporate next season. Showing me her vintage rack in one of many closets, Beverly says, “If I weren’t who I am, I would wear Giuseppe Zanotti, Dolce and Dior shoes. And for clothing, it would be Dior, Dolce and Saint Laurent. Vintage is wonderful because I love the idea of who had it before me. Whoever she was had to have a similar personality to me. She certainly wasn’t a wallflower!” Her favorite vintage store? New York Vintage on West 25th Street.

12 p.m.
In her living room I spot an exotic-looking scrapbook. Beverly, who describes herself as “a known party-giver and party-girl,” hosted her latest, grandest soirée in Thailand to celebrate her 60th birthday. “If you had a brother who lived in this house in Thailand, you’d have had it there too,” she says, handing over a coffee table book called “Paradise by Design,” featuring exotic homes designed by architect Bill Bensley, a guest at the event. “I’ve been having fabulous parties all my life. I love putting people together, creating the atmosphere, the whole environment.” And judging by the seven-tier leopard-print poodle cake and the exotic floral architecture, it’s true.

12:45 p.m.
Walking to lunch, our conversation turns to Beverly’s philosophy of life and footwear design. Ever since she started designing shoes at 23, Beverly has lived primarily in Spain and traveled often to Ibiza. “I developed a lot of my personal style there,” she says. The designer considers her shoes an extension of her personality. “Fashion is fantasy — it’s about packaging yourself, and my part is to do the footwear, handbags, jewelry. You see my shoes and you know a woman was involved in the process.” Beverly says her long connection to China over the years has proven that she can make beautiful designer shoes at prices women can afford (around $200). “And they’re comfortable.  That’s the most important part.” I smirk, practically jogging to keep up in my heels.

1:15 p.m.
We arrive at BLT Steak on 57th Street and meander through the “power” lunch groups to our table. Beverly is only in New York for a week, and just hearing her travel plans for the next two months gives me jet lag. Now with eight shoe and handbag collections a year — and that’s just for her signature line — Beverly is busier than ever. First on the itinerary is her hacienda (and studio) in Alicante, Spain, home to her seven poodles and a German shepherd. But she’ll only be home a week before jetting to China, Amsterdam, London and Thailand — and all before ringing in the new year at a birthday party in Puerto Vallarta, Mexico. After that, Beverly says she will be back in New York for a week because “Spain is closed and it will be cold enough here to wear my new vintage jaguar coat.” Such delights, it seems, are inherent in her concept of “designing your whole life.”

2:30 p.m.
As Beverly sips her coffee, she reflects, “It took me 60 years to be happy. One day I just woke up and thought, ‘I’m happy.’” She says she is enjoying focusing on her business, connecting with her customers via her blog, traveling the world vintage shopping and collecting designer shoes for her museum (located on her property in Alicante). She honors many great footwear designers there, including Charles Jourdan and Maud Frizon. “I had great teachers — some of the best designers and retailers in the world. Jesse Wytell at Via Spiga taught me to never let the heel define the shoe, and Roger Bromley taught me that every shoe has to be irresistible. Now I have young designers working for me and I’m trying to teach them the same things.” For Beverly, the look of the shoe in the store is the most important thing, and she has recently launched a lower-priced line called Fifi & Elvis that has the same whimsy as her eponymous collection. She says, “I’m trying to create something that is original, creative and irresistible, and design is most important. Call me blonde, but isn’t it?”

3:30 p.m.
Beverly is off to see “Spamalot” in a few hours, but first we run to Levi’s to do some shopping. We try on jeans together and I hear a squeal from the other dressing room. “I’m in the same size I wore at my wedding!” She happily holds up the jeans to show me. I expect this will probably be blog material because Beverly says consumers most appreciate when she shares the real things that happen to her — such as losing her jewelry while traveling or shedding those last few pesky pounds. “I came from nothing, but I’ve had a fantastic life because I dedicated my life to having a great time. After 59 years, I finally got smart and gave up men, and my business quadrupled the next year. I can never find a better man than Casey, my business manager/partner/adviser. Together, we’ve been very successful.”