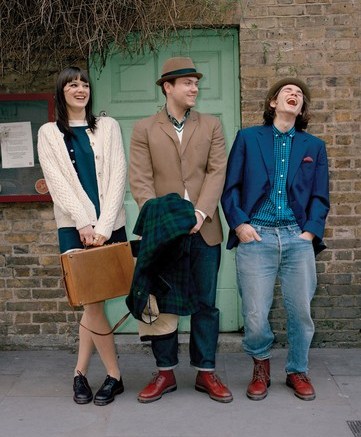 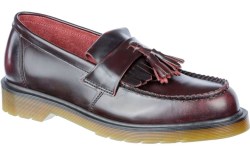 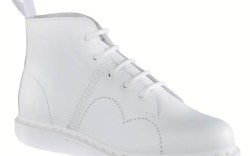 The doctor is in — again.

While it has had its moments in the spotlight, Dr. Martens, known for its utilitarian black boots and oxfords, is making a comeback. Thanks to a reenergized and more diverse product offering, the nearly 50-year-old brand is now reaching consumers of all ages — from teens drawn to its edgy fashion appeal to baby boomers rediscovering it for its comfort.

The brand’s shoes also have been spotted on trendsetting celebrities including Sienna Miller, Ewan McGregor and Johnny Depp, and have been featured in magazines ranging from Elle to Nylon.

As a result of the renewed interest, Dr. Martens’ U.S. business was up 8 percent last year compared with 2006, according to Bob Bradford, VP of sales for Portland, Ore.-based Dr. Martens AirWair USA, a subsidiary of England-based AirWair International, the worldwide licensee for Dr. Martens. And this year, the company anticipates low double-digit increases in the U.S., which accounts for the lion’s share of Dr. Martens’ business.

Kimberly Barta, VP of marketing, pointed to the brand’s heritage and colorful history in the fashion world as the driving force behind its appeal. “Consumers are looking for authentic brands,” she said. “People want products made for real life; they want things that look better six months [and even a year] after they buy them.”

Even today, a key part of the product offering is the Dr. Martens’ Originals series — trademark oxfords and boots with yellow welt stitching and a grooved sole edge that are based on the eight-eyelet boot produced in England in 1960 by R. Griggs and Co.

However, the brand continues to move forward with new designs and innovations. The fall ’08 line featured fresh updates, such as the Marceaux series, a trio of monochromatic unisex looks in black or white. Among the styles was the Pascal, an eight-eyelet boot, and the Percival, a three-eyelet oxford. In women’s — a category that is experiencing solid growth for the brand, according to Bradford — there is a new grouping for fall called Modern Classic. It features updates of the classic 1460 boot in a funky black-and-yellow ombré pattern. Also introduced was the Club, a chunky, double-strap Mary Jane style featuring a translucent bottom.

“So much of what we’re doing today is inspired by the Originals,” Barta said. “It’s product that references the heart and soul of the brand, but it has evolved.”

With such a diverse assortment, Dr. Martens has opened the door to an ever-widening audience. “We have product for many different consumer segments,” Barta said. Added Bradford, “The brand resonates with older people. It takes them back to a time and place when they wore Dr. Martens.” And on the flip side, he said, girls as young as 12 are snapping up the brand’s boots after seeing them worn by their celebrity idols.

Even designers have caught the Dr. Martens bug. Yohji Yamamoto created a signature collection for the brand in fall ’07 and continues to collaborate. “Yohji has a huge respect for the brand and passion for our Originals product,” Barta said.

Though the iconic brand is moving in new directions, it has not lost sight of its roots in the work category. Today, Dr. Martens’ Industrial offering of duty footwear accounts for 20 percent of its U.S. business. According to Bradford, the product has particular appeal among younger customers looking for a cool alternative to their fathers’ work boots.

With a product mix that encompasses both work and lifestyle footwear, Dr. Martens has garnered distribution in a broad spectrum of retailers, ranging from duty accounts such as Work ’n’ Gear to traditional department stores including Nordstrom, Macy’s and Dillard’s.

The brand also boasts a strong base of independents, among them American Rag. Courtney Rotolo, shoe buyer for the Los Angeles-based boutique, said the store started carrying Dr. Martens in fall ’07 after she spotted a series of women’s boots in metallics in the brand’s booth at Micam. Based on the success of those styles, Rotolo added an assortment of boots in neon patent for holiday ’07, followed up by a lower-profile, pointy toe style from the Ritzy collection for fall ’08.

The store also has seen strong sales of Dr. Martens’ classic boots for men, in more basic colorways such as black, dark green and navy.

Dr. Martens has also been a top seller at Villains in San Francisco. Randy Brewer, the store’s GM, said he picked up the line for fall ’07 after receiving numerous requests from customers. While the shoes are selling well to both men and women, he said men tend to stick to classics such as the eight-eyelet boot, whereas women gravitate toward trendier looks, such as the 20-eyelet boot.

While Dr. Martens may have moved well beyond the punk, Mod and grunge crowds, the brand still stands for individuality, Barta stressed. “Fashion is so eclectic today,” she said. “The 1960s was about standing up against something, whereas today, it’s about standing up for something.”