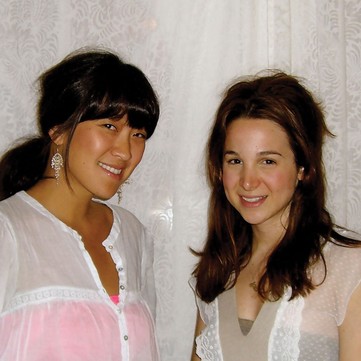 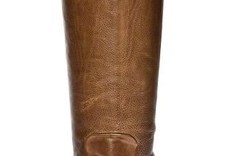 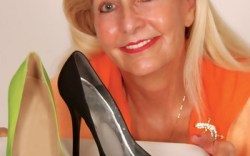 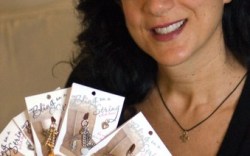 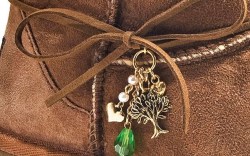 Three shoe accessories lines are designed to give women stylish ways to stretch their shoe wardrobes.

Bright idea: About a year ago, Chan (below, at left) and Wider were living in New York and stumbled across the idea while getting ready for a night out on the town. “We’d purchased some beautiful vintage fabric that wasn’t large enough to turn into a piece of clothing. And many days later, as we were dressing to go out, we tied the fabric around the top of our boots. The light bulb went off,” Chan said. “We spent the next several months perfecting the concept.”

Background: Neither designer worked in footwear before branching out into boot accessories, but both had backgrounds in jewelry. Wider, whose resumé includes working for a diamond company, has degrees in jewelry design and gemology. Chan, who holds degrees in economics, art history and jewelry design, has worked in Christie’s jewelry department and owned a jewelry business.

Inspiration: The look was inspired by the pair’s “love of fashion, a weakness for all things vintage and the Old West, a fondness for music of the 1960s and 1970s and our passion for travel,” Chan said.

Accessorizing appeal: “Bandits bring a fresh, exciting and fun outlook to footwear,” said Chan. “As much as we feel boots are a closet staple, we’ve discovered that a fair amount of people just don’t own any. Many people have contacted us for suggestions on where to purchase boots [so they can] wear Bandits. We knew we had a great product when people would stop us on the street while we were wearing Bandits, complimenting us on our ‘boots’ and asking where they could buy them. That would never have happened had we been wearing ‘naked’ boots.”

Number of styles: Five, with about 30 fabric and color options

Bright idea: Katz was dressing for a friend’s wedding and became frustrated when she couldn’t find shoes to match. “I was planning to wear a fabulous hand-painted, silk slip dress that had a matching kimono. I could not find a beige shoe anywhere in Los Angeles or Florida that matched, [so] I came up with an idea to find a purple fan to put on a beige shoe to bring the idea of my kimono to my feet. The flow of the outfit was perfect, [and] it was a huge success. I thought, ‘Well, maybe I could have a business.’ [So] I put a few more styles together.” Katz began showing the clips to some folks in the shoe industy, and soon she was picked up by several department stores and independent retailers.

Background: Katz’s first job out of high school was as an apparel buyer, but she has been obsessed with clothes and accessories since she was a kid, she said. “I always loved fashion. I would sew an entire outfit during a TV show [and loved] to accessorize all my outfits from head to toe. I [even] made accessories for my friends and myself.”

Accessorizing appeal: “My ornaments enhance a shoe and can turn the wrong shoe into the right shoe. They can take that gorgeous shoe and make it different for the friend who wants [to wear] the same shoe to the same function.”

Inspiration: The collection, she said, is designed to give women the freedom to express their personalities without having to stock up on new shoes. “It allows a woman to [take] a new shoe or an old shoe [and] pull together her own personal look.”

Number of styles: About 500, with rhinestones and painted embellishments in a variety of designs, shapes and colors. “Anything you can name, I have. They cover every kind of mood possible and any kind of look, whether you’re wearing a $1,000 pair of shoes or flip-flops.”

Distribution: Yarid’s in Virginia, West Virginia and Colorado; Kemps Shoe Salon and Boutique in Stewart, Fla.; and The Shoe Salon in Destin, Fla., among other independents

Bright idea: Defuria was thinking about starting a jewelry line and looked at using suede ties in the collection. “I thought, ‘Wow, these remind me of Ugg boots.’” So Defuria grabbed one of her boots and tied the string and a few charms around it. “It looked great, so I started wearing it around, and people began asking me where I got it, saying it was such a great [way] to add something new.”

Background: Defuria spent several years working as an advertising art director before heading back to school and getting a master’s degree in art therapy. She donates 10 percent of the company’s profits to FreeArts, a nonprofit organization that provides art therapy to children in need.

Accessorizing appeal: “[In the beginning], we weren’t having much luck getting into stores, so we asked [a New York City shop] if we could do an experiment and tie a couple of pieces on boots in the window. They got such a great response that they ended up buying and reordering several times. So we started using this as a strategy, [and] we’ve gotten into so many shoe stores that way. Most of our stores keep the display next to the cash register, and merchants have told us customers often pick one up when they buy a pair of boots.”

Inspiration: Ecology, peace and love. “[The] ‘Go Green’ tree charm with a green crystal bead has had an amazing response. Other bestsellers are the peace sign and our two heart designs. One is a heart locket and key — the little key fits right into the locket.”

Number of styles: Nine, available in about 40 different color and shape combinations