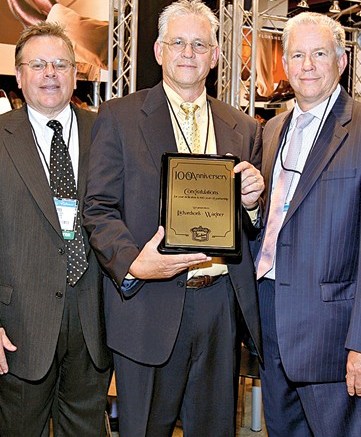 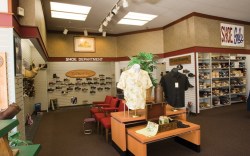 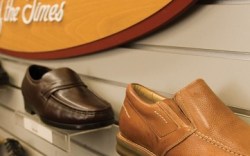 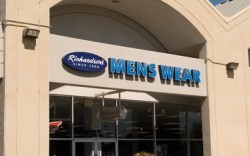 Richardson’s Men’s Wear and Shoes of Roseville, Calif., hit the one-century mark this year — joining a select group of retailers with longevity.

Founded by H.A. Richardson in 1908, the store was sold to longtime employee Paul Wagner in 1973. His sons, Jim, John and Tom Wagner (at right, from left), took over in the late 1980s and continue to run the business together today. “It’s been very congenial,” said John Wagner of working with his brothers. “We have a very good relationship.”

The store caters to big and tall men, with much of its footwear mix devoted to large sizes and a variety of widths. Richardson’s boasts 14,000 square feet, with about 9,000 square feet of selling space. And though footwear only makes up about 20 percent of the store’s inventory, the department occupies about 2,500 square feet.

Wagner relies on tried-and-trusted footwear brands such as Red Wing, Hush Puppies, Dunham and New Balance — always staying true to the mission to provide sizes and widths that are more difficult to find. “When it comes to shoes, we keep with the staples we’ve had in the past,” said Wagner.

“We’re pretty happy with the mix we have now.” In fact, his best seller, Florsheim, has been carried by the store for all of its 100 years.

With a balance of casual, dress and work shoes, Richardson’s price points range from $80 to $120. Wagner and his brother, Tom, do the footwear buying at the Chicago Collective and at Magic in Las Vegas. Much of the rest of the store is devoted to bigand- tall apparel, under the moniker Paul Wagner Big and Tall Men. The store also features accessories and fragrances.

All five employees, in addition to the three owners, average 35 years of retail sales experience, and everyone works in each department on the selling floor. “We’re hands on,” Wagner said. “We feel that when you work with a customer, you stay with that customer all the way through [their visit].”

Because Richardson’s offers in-demand sizes, they often send merchandise to customers who call looking for a specific item. And those shopping for apparel can take advantage of onsite tailoring.

Richardson’s advertises primarily on cable television, though the owners also tap into a large customer database, which they use to send out directmail pieces, alerting customers of sales. Over the last five years, Wagner said, the sales model has not changed much. The store runs a clearance twice a year, with other smaller sales on specific categories, such as shoes, happening more frequently.

In the spring, the shop set up a permanent sale section in the shoe department for the first time. Now, discontinued shoes and leftover merchandise are marked down 20 percent to 40 percent.

In its 100 years, Richardson’s has changed locations three times, moving into its current space, a former Safeway grocery store, in 1978. Since then, the store has been renovated three times. The first time, the Wagners downsized the shop and stopped offering women’s clothing. Most recently, they moved the shoe department from the back of the store to the front and added new carpeting and fixtures.

The economy weighs heavy on Wagner’s mind these days.

The housing crunch has hit California hard and affected some sales. “The work shoe business hasn’t been as good as it’s been in the past,” said Wagner. “It’s been tough with the building industry [struggling].” In addition, the budget crisis in California has led to a decrease in spending, he said, as many people in the region work for state government.

The No. 1 challenge for business, though, is the increasing price of advertising, Wagner said. Rising costs prevent him from placing print ads in newspapers. “It has become harder to get the word out,” he said.

Still, Wagner anticipates increased sales down the line. Some of Richardson’s direct competition — mostly big-and-tall shops — have recently gone out of business, which could mean more customers for the store.

But right now, it is putting growth on hold. “We’re not looking for expansion of any sort,” said Wagner. “As with most businesses like ours, we’re in survival mode. You get through from year to year and are happy to be here.”

Florsheim presented the Wagner brothers with an award in July, acknowledging what a rarity it is to have a partnership that has lasted for a century.

Don Roberts, VP of sales for Red Wing Shoes, agreed. “Paul Wagner was part of the Red Wing shoe store business since the 1950s, and his store has been the epitome of high quality and customer service,” he said. “Richardson’s has helped us build our reputation as a brand on the West Coast.”

Neighborhood vibe: Located 20 miles outside Sacramento, Calif., Roseville has become more of a shopping destination due to the rising popularity of the Galleria mall, which is undergoing a $250 million expansion. Customer base: Men between the ages of 45 and 65 from the Sacramento Valley and as far south as Modesto, Calif., shop the store.